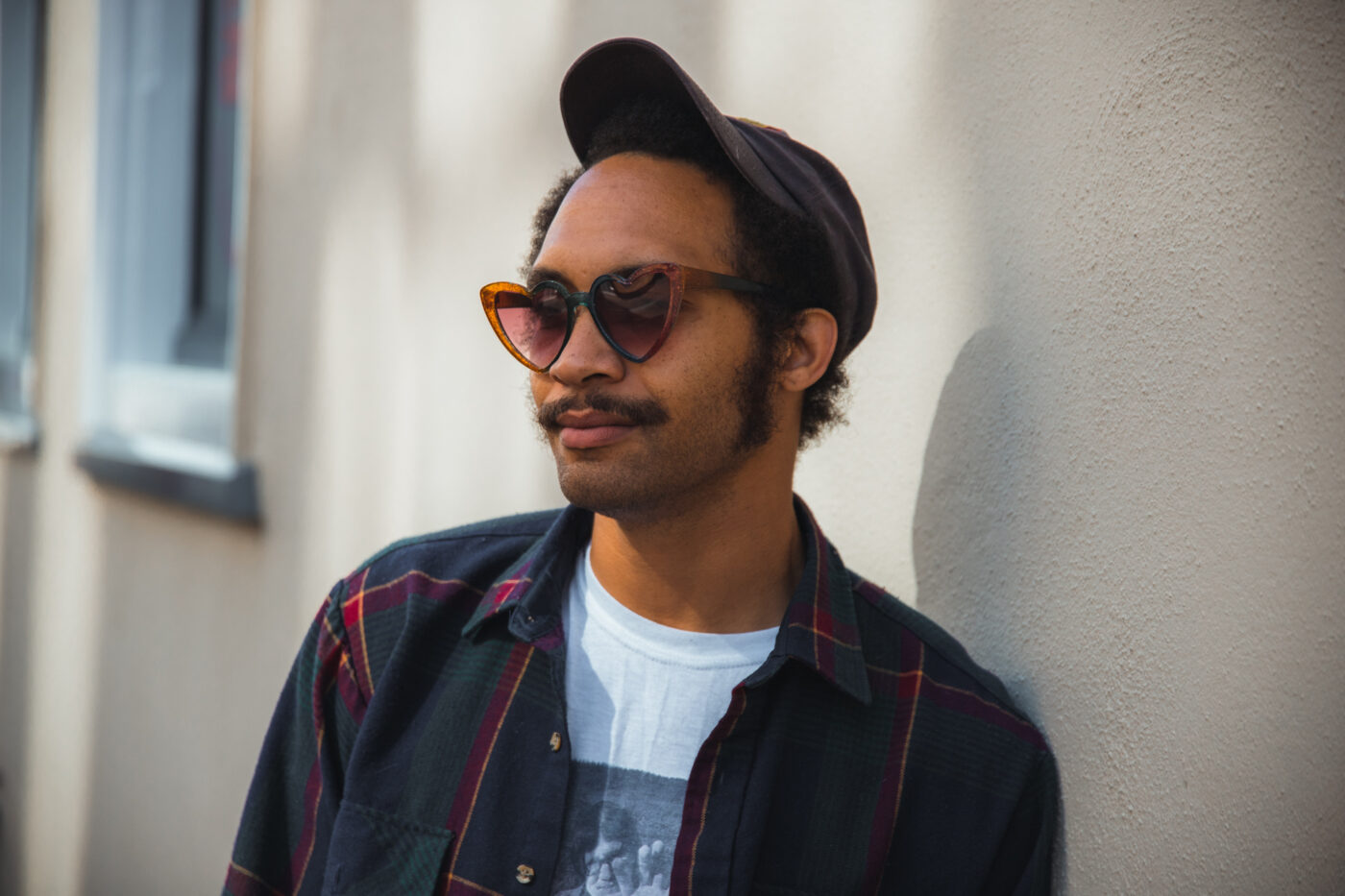 It was on a drive back from one of the islands in the North of The Netherlands that I heard Tré Burt first. Properly, at least. The perfect combination of first-rate folk songs and his voice that brings the message straight through any barriers you might have. There was nothing but asphalt and other idiots driving their cars coming up for the two hours to come, and Burt’s songs were the ideal distraction.

Ever since, his most recent albums Caught If From The Rye and You, Yeah, You (produced by Brad Cook) have been trusted companions. When Burt was signed to John Prine’s Oh Boy Records in 2019, he was one of only two artists  – including label mate Kelsey Waldon, to join the label in the past 15 years. As April of this year came to a close, Burt and I met up at my local record store Plato Utrecht and recorded this session, for which Burt played Dixie Red and covers of Elizabeth Cotton and Townes van Zandt. Enjoy those videos below and the talk we had in September.

“When I heard Elizabeth Cotton, I heard something familiar.”

“You’ve got that young-dad-vibe”, was one of the first things Burt ever said to me in April, just over a month before I would actually become one. During the interview, Burt was sitting on a porch somewhere in the USA, and I was at home in between changing my daughter’s diapers. Just some context for this talk, that started with some background on his cover of Shake Sugaree. “The first time I heard Elizabeth Cotton must have been in high school. Yeah. I think it came on a compilation that I got in high school that had Robert Johnson on it and some other like Delta and Piedmont style pickers and blues singers and things like that and Elizabeth Cotton. But yeah, I heard that song. Picking is really cool. Singing is really cool. Her granddaughter sings on it too. Then I just went down a little Cotton rabbit hole, as anyone does when they hear her.”

It was her guitar playing that originally drew Burt to her because he thought he was doing something adjacent to that. “When I heard Robert Johnson, I thought: ‘Well, I’m not that type of player’. You know, I can’t play like Robert. But then I heard Cotton and I heard something familiar, like a kinship in the way we play guitar.”

At that age, Burt was already writing songs. “Yeah. I was writing. I think, if I remember correctly, I told you, you picked my weak spot because I don’t normally do covers. I learned covers back in the day, but just to learn techniques to write my own stuff.” Turns out, he started playing guitar by accident. “Completely by accident. When I was about thirteen, I was at my brother’s room looking for something while he was at work and his room was really, really messy. I didn’t see his guitar underneath a pile of clothes and I stepped on it. I felt like shit because that’s the thing that he’d always do. And when he came back, he felt bad for me for feeling so bad for him. So, he kind of just showed me what the guitar sounds like up close and personal. And then I learned to play guitar out of guilt to kind of please him. And then before I knew it, I couldn’t put the thing down.” That’s how Tré Burt started his career in music, based on guild. “I’m sure there’s other healthier ways to start, but that’s how I started.”

Burt thought writing songs was just what you did naturally. “I didn’t think about it like: ‘Oh, I’m going to write my own songs’. Instead I just started putting sounds together. ‘This goes with this, I should put words here, I guess’, and I didn’t really think anything special of it. It was just what I thought everybody did with a guitar.’ It became more serious when he played in public for the first time, at a talent show at his high school. “The feeling of playing a song I wrote in front of people was addicting, and from there, I just chased that feeling. I got into busking on the streets, playing some shows around town. I went to college in San Francisco for a year before I dropped out because, I mean, I was a student of songwriting and I wasn’t really learning how to do that in class. So, I just went to go figure out how to do that without owing tens of thousands of dollars in debt to the government.”

His style developed over time, Burt tells me. “At first it was very, very different. I mean, if you listen to it, you can probably hear it on my first record Little Mornings. I made when I was 15 and it’s still on the internet. I forgot my password, otherwise that shit would have been taken off years ago. But shout out to the little Tré, you know. I was in my garage, you know, on Audacity I think. Just making sounds, making these little songs. Yeah, it was fun.”

“Richie Havens was the first person I personally identified with.”

A lot of people almost automatically get compared to Dylan, as soon as they pick up an acoustic guitar and start singing. The first artist I thought of listening to Burt though, was Richie Havens. “Yeah, shout out Richie Havens. Thanks for saying that. Yeah, absolutely. He was he was the first person I personally identified with. I didn’t really identify with Dylan as a person. But when I heard Richie Havens, I identified with him as a black man playing a guitar, you know, that wasn’t like, quote unquote R&B type music. He was drawing from the more folky side of black music, and then I was like: ‘Okay, yeah, he kind of looks like me’. I identified with him for sure. Yeah.”

It can be really important to young artists, to be able to recognize themselves in more established artists. To see that this career is possible for them as well. Burt agrees: “You got to have like little stakes in the ground where you want to go. I mean, I read this quote from Bowie a couple of days ago where he said, when he found something he really liked or a musician he really liked, he tried to become them for a little while to learn how it works, where they come from, where the songs come from. And then when he felt like he learned enough, he took what he needed and moved on to the next thing. That’s how you transform.”

Translating the inside to the outside world

“I was never really too interested in being like anyone else, you know? I figured they already did it. I don’t know. It just wasn’t interesting to me. But, yeah, I would adopt certain mindsets to get in or out of other places. The new stuff I’m working on is a departure in the sense where… I mean, my only goal with writing songs is to try and get closer and closer to my truth. How do I really let the sounds inside of me come out into the real world. And how do I make that resemble as close as possible what it sounds like inside. And I feel like with each record, I get a little bit more aware of that and a little bit better at letting the sounds out. So if it sounds a little different, it’s only because I’m getting a little closer to the translating the inside to the outside world.”

Does Burt feel like he’s found his place in the music industry? “That’s a great question. Yeah, I feel like I’m getting more comfortable with myself. Which kind of showed me where my place is at in this whole thing. Basically, by seeing what I’m not, you know. I’m exposed to a lot more musical communities and the industry now and it’s easy to see, okay, well, I’m not that so I must be this. Okay, I’m not that so I must be this. And I guess just not really caring or trying to be like anyone in particular and trying to fill the negative space, so to speak. And in the negative space is me.”

“Everyone I affiliate with or I’ve been on tour with, have just been like idols in that sense. I want to be like them in my career, because they’ve all been so welcoming and so supportive and no bullshit. Shout out to Nathaniel Rateliff, Shakey Graves, Shovels and Rope and Erin Rae. They all just kind of do their thing.”

Cut from a similar cloth.

“I forgot when I first heard Townes. But it was Live at the Old Quarter, that was the first record I heard years ago. My connection to him was more so his ethos. At the time, I really related with that. He played sports in high school before he found music. And I played sports in high school before I found music. And we were both troublemakers. Anyways, I just felt like we were cut from a similar cloth. The clarity in his voice was the thing that really affected me. Everything he’s saying was so clear and beautiful. You can hear exactly what his soul sounds like, in his words. He’s a teacher, for sure. Still is. I’ve been playing Two Girls for years. Those are busking songs that I used to play. It’s one of them. I think my favorite is Don’t Take It Too Bad perhaps. That’s a hard question, but I love singing that one.”

After talking to me on Zoom, Burt went back on tour for a few dates before retreating to a cabin in Canada. “I’m going to get all my shit, my keyboard, my guitar, a bass and just hunker up next to a lake for a week and a half and write finish writing the next record. So I’m really stoked about that because I haven’t had time to do that. I need at least two days to walk around in circles, pace around, know every inch of the building I’m in, feel bad about writing songs because you go through this period where it’s like, I don’t know how to do this, I’m not good enough. All this shit, you got to shake that off and surrender to just be humble. And once you shake off all that stuff and sit, then you’re at a place where you can begin.”