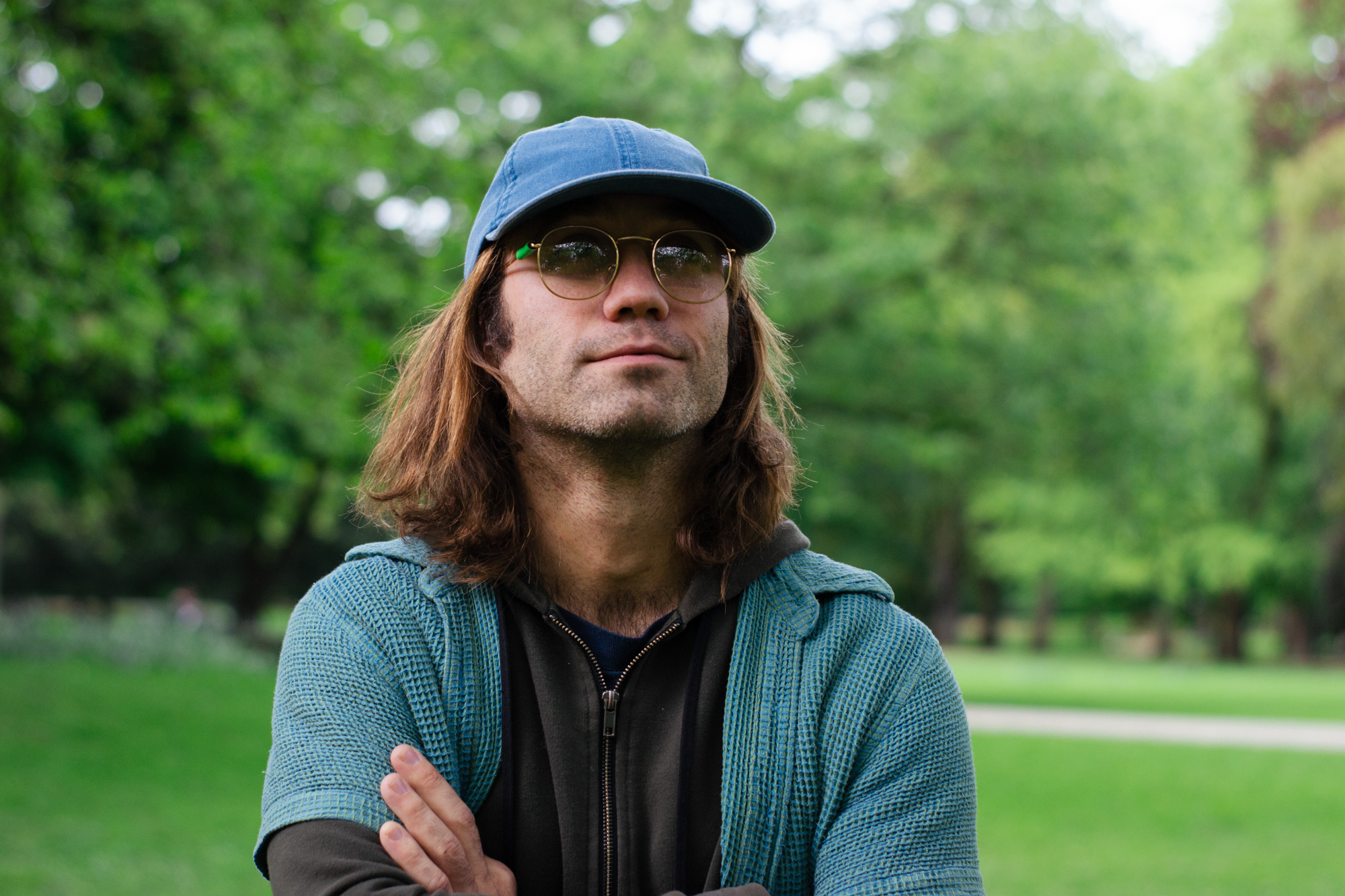 The Low Anthem had just experienced a terrible car crash, resulting in hospital stays for several band members, when singer Ben Knox Miller drove a U-Haul full of destroyed instruments back home. They spent four hard years recording their record Eyeland, finally released it and went on the road to play live again. Only for this to happen on the fifth day. It could have easily knocked a person’s spirit for good. But for Miller it did the opposite. It ended a songwriting drought of four years and had him write and record a song a day for over two weeks straight. ‘Jeff came back after recovering from his concussion and said: “Okay let’s do this”, and I told him: well, I think it’s almost done.’

Back in 2018 I met The Low Anthem in Cologne, Germany where we filmed two songs from their most recent record The Salt Doll Went To Measure The Depth Of The Sea. Please enjoy these videos with one of my favourite bands of the last decade and read the interview I had with Miller.

Let’s back it up a little bit. The Low Anthem started out in 2006 when Miller and Jeff Prystowsky met at their college radio station. A year later they released What The Crow Brings, followed by what would become their biggest record Oh My God, Charlie Darwin in 2008. In 2011, Smart Flesh was released – continuing roughly the same sound of its predecessors. However, the many years of touring the world and playing the same songs every night, started taking their toll on the band members. They were quoted saying they were ‘scared of becoming robots’. So, they went back to their hometown of Providence, Rhode Island in 2012 and instead poured their energy into their local community by restoring a theatre and building their own recording studio within.

Miller quickly had all the songs written for their next record but recording them would end up being a dragged-out affair. ‘The songs were stories I remembered from my childhood, written from a kid’s perspective. Being a child in my neighborhood, me and my friends running around. When I first wrote the songs, I just wanted to release them. But we got really distracted. We were learning how to record and none of the recordings were right. It took a really long time to figure out how we were going to do the actual process.’

‘In those four years, the whole time I thought: “These songs are important to me, we’re not going to abandon this project. We’re going to put them out.” I had a vision for the songs in the beginning and then the process took over. It became muddy and it was really a struggle. During that time, at first it was conscious and then I was just stuck, I told myself I wasn’t going to write anything new. Because it was important to me to put those songs out and if I was to write the next thing, we’d never finish this idea. You always want to play the newest thing that you do. So, I decided not to give myself something new, but then I didn’t write anything for four years. And during that time, I didn’t know if I was going to write anything anymore. It got to the point where just the process of writing songs felt so foreign to me. “Maybe I don’t do that anymore.” It was scary.’

‘I don’t think there was a perfectionism. Maybe it was more an overthinking thing, for me anyhow. Finally, four years later, my bandmate Jeff just tells me: “That’s it, I’m booking mastering for Eyeland. So suddenly that was it: no more obsessively working on it. We took all the stuff we recorded and sliced and cut it up. One more chance to play with the material and collage it back together. That was it.’ The band tried to get the machine back in motion, but lost Jocie Adams and live members (like Twain’s Mat Davidson) in the process. ‘We’d taken so long, that Jocie had went to do Arc Iris. So, we had a new band put together, which we’re still playing with now. We worked hard to get the machine road ready and booked a serious tour. Our first shows in four years. Eyeland comes out, finally we get to share new music and five days into that tour we crash the van in a high-speed collision.’

All their gear was destroyed. ‘Nobody was dead, which is good, but everything’s broken, and everybody had to go to the hospital. It was insane. Everything led up to this, just to get shut down like that. It was sad, but it also kind of made sense. The process had been so hard with that material, so when we crashed the van I thought: “of course”.’

It changed Miller’s values about producing music, he explains. ‘You spend four years trying to make the perfect thing, and then you crash your van in the beginning of the tour. Everything’s fleeting and subject to destruction. My band mates, and Jeff in particular, were pretty messed up. I was lucky in the way that I flew through the car; I was in the far back and crashed into some seats that padded me. I was the one that was able-bodied and got all the instruments and took them back to Providence in a U-Haul, while the band recovered in D.C. and New Jersey.’

Miller got back to his hometown with nothing but time on his hands. ‘The tour was cancelled, so I had nothing to do and all the instruments were useless. I was reading a book called Where The Heart Beats, a biography on John Cage by Kay Larson. It looks at John Cage’s development as an artist and his relationship with Buddhism. It talks about different periods of his development and different philosophy teachers that he had. For whatever reason started writing these songs. And I didn’t stop until there were sixteen of them. One every day. Multi-tracking live demos of them, with very little editing. I did the opposite of what we did on Eyeland. Suddenly it was there: the window was open again and fresh air came in. Everything that I had been holding back for four years came loose. It was the easiest work I’ve ever done. A really fun moment. I don’t know how often you get to experience that perfect storm. It was really straight-forward all of a sudden. I didn’t want to pinch myself.’

‘The story about the salt doll that went to measure the depth of the sea, is a story that goes many years back into Hindu teachings. It’s a short story that bestows the idea that to know something you have to lose and submerge yourself into it. In the John Cage book, it was offered as a way of expressing the futility of explaining something, like a spiritual experience or an experience of fully actualized submersion. That state of total connectiveness. The story is about why that’s something that can’t be taught. The salt doll wants to know about the ocean. But to know about the ocean, he has to lose himself into it before coming back to tell about it. The book just mentions this story in passing, just one line. I tried to trace it back and started reading all the mentions to it that I could find. Like all those Hindu writings. And I became obsessed with the idea. It was such a perfect concept… almost cartoonish, I decided to dive in: what would this little salt doll get himself into?’

They kept it simple after that and avoided getting lost in the same long process as before. ‘I was waiting for Jeff to come back. He was out of commission for about three weeks with a bad concussion. By the time that he recovered, these songs were nearly fully realized. He said: “Alright, I’m ready to start!” And I was like: “It’s almost done!”’ Miller laughs while remembering the conversation out loud. ‘I didn’t want to go back to that Eyeland mentality of redoing everything. We ended up bouncing all that material from the little digital 8-track I’d been working on to a 2-inch machine. Some of the stuff we tried to re-record better, but we realized there was no better. It was direct. And it was exactly was it was. A lot of it improvised. It was done quicker than anything we’ve ever done.’

The Salt Doll Went To Measure The Depth Of The Sea was released in February 2018 on Joyful Noise Recordings and saw the band play over seventy shows in the United States and Europe. ‘It’s such a concept record, that I don’t think we’ll ever be able to play that show again. Everything we brought on that tour was specific to that material. I don’t know what becomes of those songs now, shuffled into the rest of our material.’

It was that during that tour that I drove to Cologne, Germany to meet up with The Low Anthem and film this session. Now, about a year and a half later, I’m about to see them play live again. In Amsterdam this time, with another record they’ll play front to back. But this time they’ll play Oh My God, Charlie Darwin, to celebrate its ten-year anniversary. Has it been weird to reconnect with those old songs? ‘We played two shows in the States before we left, and the songs felt like very old friends. It’s very comfortable. Some of these songs we haven’t looked at for eight years. We’re playing them stripped-back to their most basic elements. It’s been nice and refreshing.’