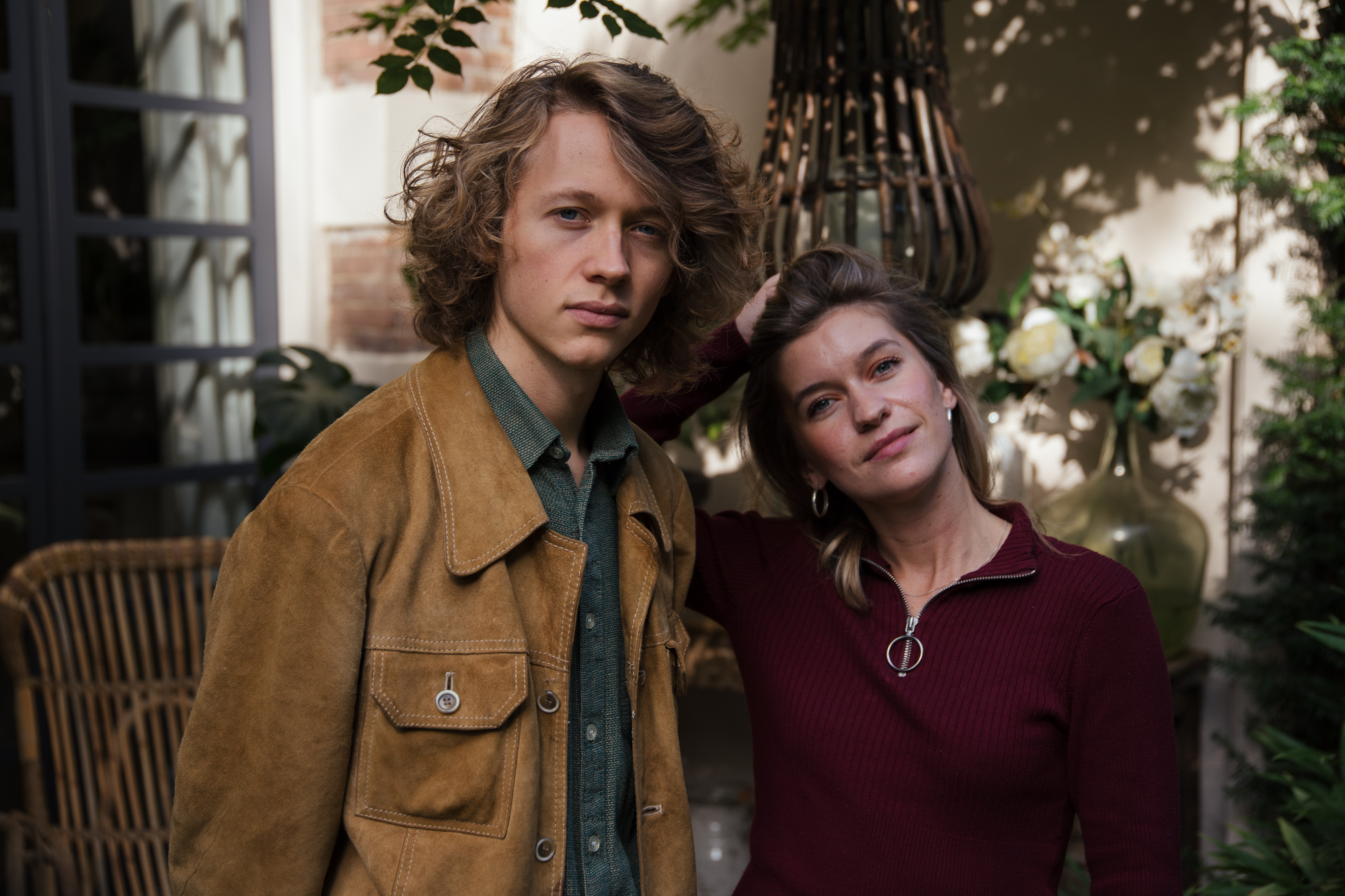 After spending most of his childhood years living in Zimbabwe, Nicaragua and Ghana, Sam van Ommen moved to Amsterdam, where he attended a local jam session and met singer Julia Schellekens. They started talking that night, became instant friends and soon after found themselves in Julia’s room nervously playing each other their own songs. Now, four years later, Sam & Julia are becoming a more and more prominent band in the Dutch Americana scene, with a debut EP on Tim Knol’s label and a LP due in 2020.

I meet Sam and Julia in Amsterdam for this interview and find them both at the kitchen table with their headphones on; doing a final check on the mix for their next single. ‘We’re in the midst of writing and recording our first album. We’ve spent this summer writing together in my tiny room and other places and now we’re bringing those songs to the band.’

From Ghana to an Amsterdam attic

Sam’s parents grew up in the sixties, his dad is the one who passed along his musical preferences to Sam. ‘He told me about The Beatles, John Mayal, Jimi Hendrix and lots of old blues bands. And he taught me the first steps on guitar. I took it from there. My dad never really wrote his own songs, he just played covers with his friends. He works for the Dutch Ministry of Foreign Affairs, so I grew up in different countries. We moved to Ghana when I was eleven years old, so that’s where I picked up the guitar and started playing and writing. That country and its music still has a special place in my heart. It’s really cool to realise that that’s where the music that became the blues and americana originates from. Now my dad’s in Burundi where he still plays in bands with colleagues and locals. My mum never really played herself but loves listening to it.’

Julia: ‘I think our fathers are from the same generation, so my dad gave me the same music as Sam’s dad gave him. Bob Dylan and The Beatles were always on in our house. My taste in music is fairly broad I feel, from soul to pop to roots. As long as the song is really good, I’m interested. In americana music, often the lyrics are the base. People like Emmylou Harris, Townes van Zandt and Gram Parsons suck you right into their songs with extremely expressive lyrics. That’s what I love the most and I think that’s why this genre speaks to me particularly.’

Sam moved back to Amsterdam at fifteen and attended a school for expats, but none of his classmates there were very music minded. ‘That’s why I looked for other places in Amsterdam where people would meet to play music, like the Winston. In Ghana I only had my band, that was allowed to play at school twice a year. In Amsterdam there were all these long-haired guys who played their own songs, that really was a revelation and made me take it more seriously.’

It was one of those same nights, eighteen months later, when Sam met Julia. And Julia met Sam. ‘It was one of those typical jam session nights, where everyone just plays solos till the lights go back on’, Julia remembers. ‘We exchanged phone numbers that night, so we must have talked about americana music for a while. We made plans to meet up in my little room in the attic, to play some of our own songs and we agreed to play Townes van Zandt’s If I Needed You. We both remember being very nervous, because we were getting to know each other while playing our very early songs. And we’d sang If I Needed You together, so I guess we’d gotten comfortable quite quickly.’

Sam: ‘I can’t remember what song I played that day, was it Five Months?’ Julia replies: ‘I think so yes. I was really impressed and immediately thought you were very original in your lyrics. Like I was looking at an old soul, I still think that. We both felt like we wanted to meet up again.’ The duo started writing songs together quickly after that. ‘I still have footage of the first song we wrote’, Julia laughs. ‘A very dramatic song! Haha. But that was a wonderful time really, with our first show as well. Four years ago. People around us immediately told us to stick together because it sounded promising to them.’

Rather than rushing into recording a debut EP, the duo kept playing and writing a lot, changing band members and taking their time. ‘We’re not really bothered rushing things; we want to grow this gradually and steadily.’ Some of the early songs did make it to So Far, So Good, released in 2018. Fellow musician Tim Knol – a welcome and regular guest on this website – must have recognized his own ambitions, taste and attitude in Sam and Julia, and decided they would be the first band to be signed to his own record label I Love My Label.

‘Before I met Sam, I often tried to write fairly inventive chord structures. Sam calls them ‘Juul structures’ now. He showed me that sometimes simplicity makes a song more powerful. Sam is more of a native English speaker, that made me want to improve my English.’ Sam listens carefully and adds: ‘My singing has improved because of Julia. When we started out, I had some experience with singing in a band but never this intimate and prominent. If we’d listen back now, we’d be horrified I think!’

Julia: ‘We pretty much always write together, although we approached it slightly different compared to the EP. It works well to write together, neither of us ever ran out of the room frustrated or angry. Yet. We always at least finish one song. I think that’s pretty unique. But in doing so, we both have to make a lot of concessions on lyrics or melodies. On the record, we don’t want to make any more compromises. So, we’ll end up with a couple of songs that are particularly Sam and some that are more mine.’ Sam adds: ‘I think it’ll be more interesting for listeners as well. We already feel like it’s adding some depth in a lot of ways.’

Julia continues: ‘Sam and I lead very different lives and have other experiences, so it feels good to be able to write about it all and to tell each story exactly how we want to. Our writing is becoming more personal than before.’

The two young musicians have fairly different musical preferences, Julia explains: ‘We’ve been able to find each other within this genre, by discovering the music together and listening to a lot of the same bands, like Wilco, The Milk Carton Kids and Kacy & Clayton for instance. We often let each other hear songs we like.’

‘Aside from Sam & Julia, I’ve been working on my Dutch songs, because I’ve always had a love for certain music that’s sung in Dutch. I’m discovering my own style in that genre too now. A totally different thing.’ Equally promising though it seems, as somehow a very old Dutch song that Julia once wrote for her mom has recently been picked up from Soundcloud by Johnny de Mol – a well-known tv-host, who sings it in his theatre shows now.’

We keep talking about Dutch music for a while. ‘Another hero of mine is Maarten van Roozendaal, probably the best Dutch lyricist ever. In my opinion. He’s like Jacques Brel, Dylan and Nick Cave. Writers of lyrics that can be all things: funny, cynical, sensitive… No one would ever call their songs cabaret, like Dutch people tend to do with any music that’s written in Dutch. It’s pretty stupid. And a waste. Maarten van Roozendaal was a bizarrely brilliant musician and songwriter. One of his biggest influences was Tom Waits, and I think you’ll find that they’re much alike. I’m afraid The Netherlands are a bit behind in this and people should be less eager to confine art into boxes.’ Sam agrees with her: ‘Van Roozendaal is your Bob Dylan. I think he means to you what Dylan means to me. I would be very interested to see what label Van Roozendaal’s songs would get it they were translated into English.’

As long as the songs are good

‘We want to be known for writing great songs and having character,’ Sam remarks. ‘I feel too often we are labelled as ‘sweet’. So far, we’ve mostly written autobiographical songs about our mental challenges…’ Julia interrupts and adds: ‘your panic attack in a zoo and my failed love life. I feel we could’ve been more specific and personal on So Far, So Good, we’ve been learning and daring to write more honestly.’

‘Sure. We haven’t really written any protest songs or lyrics about society yet, but I feel like we’re both in a part of our lives where we’re still growing, discovering and finding out who we are,’ Sam thinks out loud. ‘We’re still trying to find our places in life. That seeps into our songs.’

That new single they were listening to when I came in – due out in January 2020 – has Sam & Julia sounding more like Wilco and Teenage Fanclub in a song inspired by, indeed, Julia’s – in her own words – failed love life. ‘I wrote it about a relationship that was more of a cat and mouse game. It made me feel like a slot machine: he’d throw a coin in it and I would start to ‘play’. Controlled and steered by him. Surely I’m not the only one to sometimes feel that way.’

‘I really respect musicians who have a long career and who claim the freedom to explore different sides and projects, much like Tim Knol continues to do. Wilco is the same. They created a loyal base of fans who know and appreciate that every now and then they’ll do something completely different.’ Julia nods: ‘I would really like that with you. I can’t imagine this ever ending. To keep reinventing ourselves on every new record. We both enjoy producing, so who knows what paths we’ll end up exploring.’

Sam concludes: ‘As long as the songs are good.’

If I Ever Was A Child (Wilco)
Spotify | Apple Music