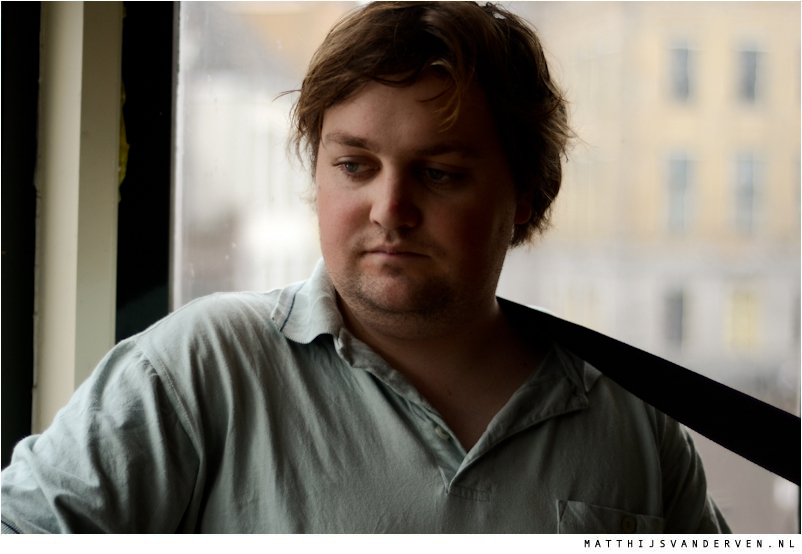 It was in May 2008 that I saw Tim Knol perform live for the very first time. It was at EKKO in Utrecht, where I talked to him earlier that day during Anne Soldaat’s soundcheck. The following summer, we recorded his session at the Oudegracht in Utrecht. This session has since had over 112.000 views and so we decided that this five years anniversary called for a second session.

About a month ago now, we were all set up at the exact same location – Tim even used the same guitar – when halfway through the first cover it started to rain slightly. A little bit of rain turned into a lot pretty quick and a look at the radars didn’t provide any hope for that afternoon. And so we had to give up on the location and moved ourselves to the space above the Simon Lévelt Café. So, this session is not at the same location, but in the end all that matters is the music. And the canal is still visible in the background.

Let’s go back in time for a bit. Five years ago, Knol had only played that one solo performance, was still unsigned and excited about things that were maybe going to happen. Almost exactly a year later, he signed with Excelsior Recordings and did a tour as the support for Johan before releasing his debut album in January 2010. There’s a chapter on Knol in my book Onder Invloed (L.J. Veen, 2012) from which I’ll quote and translate one paragraph:

Still, something beautiful happens that day. In the back of the venue, a boy sits against the black wall. Waiting. Waiting for the sound check. For his moment, apparently. ‘Ferry Roseboom asked me to play some songs tonight, and Anne Soldaat’s band is going to play with me. Cool, isn’t it?’ It’s my first encounter with the young talent from Hoorn, Tim Knol. Three year later, the promise is fulfilled and Knol is known by alternative music lovers of all ages and from all corners of the country. Two successful albums, shows in sold out venues – from EKKO to Paradiso -, Lowlands and Pinkpop, tours in Germany and Indonesia, an Edison Award and countless appearances on television.

This quote tells a little about the success that Knol has had since the recording of the first session. Possibly due to the fact that these covers were about the only videos of him as a solo musician on the internet, the session became highly popular in the years to come up until today. Over 112.000 views on YouTube alone already. I’m not one to pat myself on the back for ‘discovering’ someone, and so I won’t do that here. It wouldn’t be true either, Knol discovered himself, really. But I do enjoy it when someone who’s recorded a session for Onder Invloed early in his or her career becomes successful with what he or she does.

While I’m writing this, Knol is busy in the studio recording his third album, after taking some time off last year to focus on his other passion: photography. I personally am very interested to hear what direction he’s heading in on this record. His inspiration and influences still – at least for some part – come from music from back in the days, judging from this session. In 2008, people started coming out of their houses and opening their windows when they heard his amazing voice coming from the canals. Now in 2013, you can do the same while playing this new session as loud as you can.