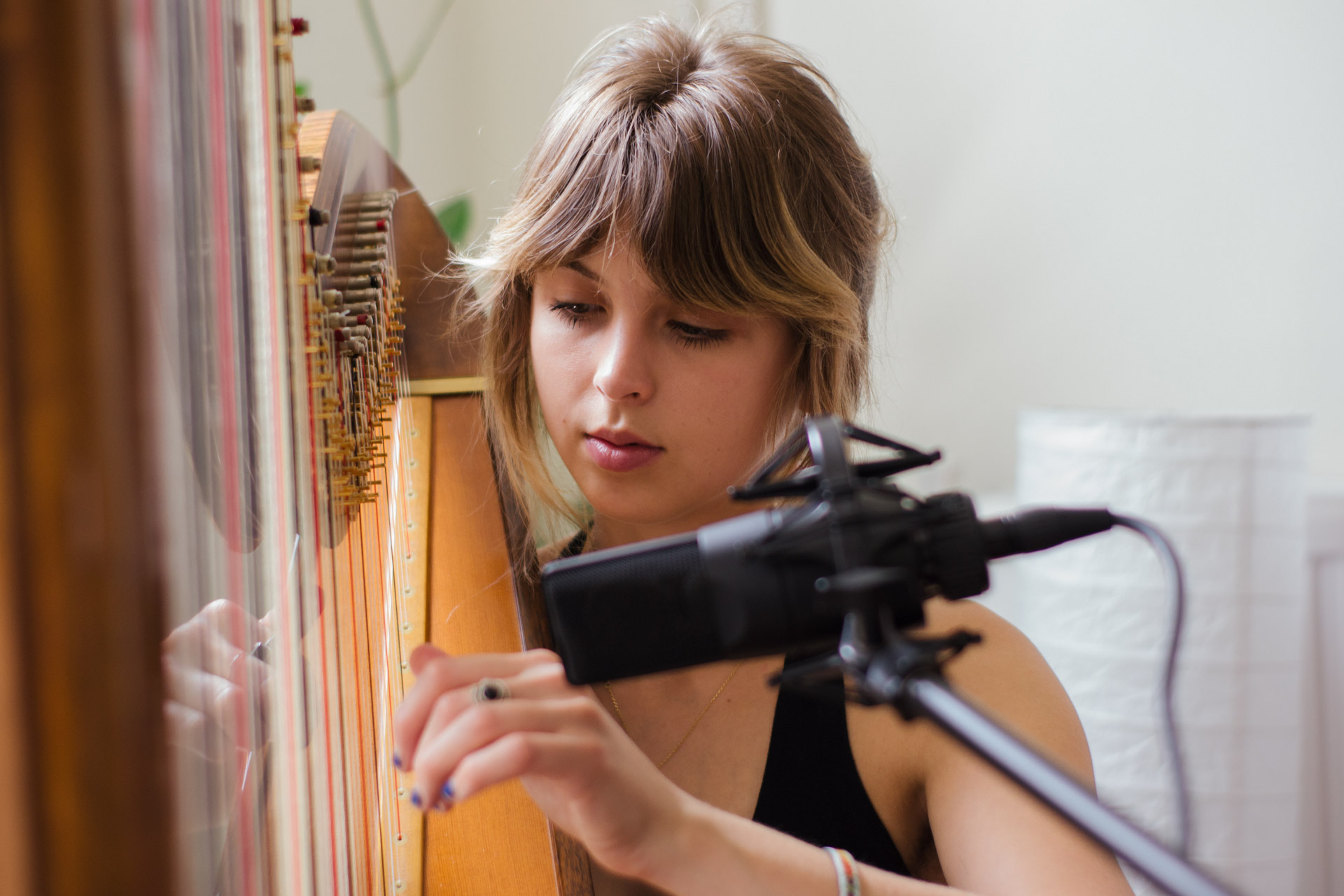 Mikaela Davis is a harpist and singer from Rochester New York, USA. She released a stunning record called Delivery in 2018. And she’s toured with The Staves and Bon Iver and played in Grateful Dead founder Bob Weir’s band. For The Influences she recorded covers of Gillian Welch and Cass McCombs, and her own In My Groove.

All of a sudden, I find myself wondering what places are like, when I read about them. Until not so long ago, I could just travel there and find out. Of course, I would still have to have money and time, but at least the option was always there. Well, not anymore. So, we’re back to reading books, searching the internet and – preferably – using our imagination. Which is why I’m here in Utrecht on a Wednesday night, preparing Mikaela Davis’ session and thinking about what Rochester, New York might look like. There’s probably a river. I know it’s near a lake and relatively close to Niagara Falls. Right? That lake turns into a river North taking you all the way to Montreal, if you’re a really good swimmer. I’ve got plane tickets to Montreal for June 8th. Oh well, it looks like that city will have to live in my imagination for a little longer as well.

Music to guide us through the isolation.

These times, they are disturbing and frightening. We hardly know what’s happening and we sure don’t know what’s going to happen in the foreseeable future. Thankfully we have music to comfort us and guide us through one isolated day into another. There are so many livestreams, and they’re wonderful. It is strange musicians haven’t been doing those for years. Still, just days before all events in The Netherlands were cancelled, I got to see Big Thief, Job Roggeveen and Patrick Watson play live. Nothing beats those nights of going to a room filled with people and see live music. Let’s hope we’ll get to experience again sometime soon. In the meantime, I find myself delving into lyrics or playing the same song on repeat for an hour just because its melody or groove makes me feel good. Even for a little while.

One of the records I’ve been playing most is Mikaela Davis’ Delivery. One of the most creative and uniquely sounding records I’ve heard in a good while. The first I remember hearing of Davis was through The Staves and Bon Iver, when Davis supported both on their tours. Delivery is a record you should play from start to finish, preferably a little too loud, and you’ll find yourself emerged in its melodies and sounds. Davis’ harp sounds so soothing, it’s really only matched by her brilliant voice.

Turns out Rochester is cool.

I feel lucky to have filmed this session with her, split over two separate occasions. In My Groove was filmed at the empty EKKO in my hometown of Utrecht back in 2018, the two covers we shot in the rustic town of Schoonhoven sometime last year. It was there we sat down after filming and talked about her influences and her music. “I grew up in Rochester New York and lived in New York City for a year before moving back to Rochester. It was too expensive! I was planning on moving back to the city after a while but ended up staying home. I’m happy I did. I felt lost at sea in New York City. I needed to get grounded again and go back home. Rochester is a smaller city and I grew up in a suburb. I didn’t go into the city all that often growing up, but now I live in the city. It’s cool: there are a lot of musicians, a lot of good coffee and local beer.”

Mikaela Davis’ hometown is also where she met Alex, the drummer in her band. “We met at school. I met Cian through Alex at college. I needed a new guitar player and Alex said: ‘I know the perfect guy!’ We met at our first band practice.” Davis’ bass player Shane is Cian’s little brother. “We all write together, so they influence me for sure. When I first met Alex, he introduced me to Elliott Smith, Sufjan Stevens and I became obsessed with their music. Now I’m co-writing with Alex and Cian. The next record will have two of Cian’s songs on it. I’ve been calling us Mikaela Davis and Southern Star, so it’s really a band name. I’m happy with that.”

Cian McCarthy: “When I first joined the band it was kind of like filling in a role. Whereas now everyone comes up with their own parts and we all arrange everything on the spot.” Davis: “If I bring a song to the band, we’ll all work on the arrangements. Everyone’s opinion is important.” McCarthy: “There’s a space where all our different tastes meet, but everybody has certain artists that they’re really into. I’m really into Indian music, and the others maybe don’t listen to it every single day. I love Hindustani classical, like Ravi Shankar and Ali Akbar Khan. The music of North India, primarily.”

Mikaela Davis: “I grew up listening to a lot of folk singer Gillian Welch. My mom loves her music. So that’s been an influence for me, subconsciously first and consciously when I rediscovered Gillian’s music later in life. I really learned to appreciate it. When she and Dave Rawlings play together it’s just magical. It’s something real special they have together. I don’t know, I just love it.” McCarthy adds: “She has this way of sounding really old and classic, and her lyrics are definitely unique and creative. She’s brought new life into folk music without pushing it into some other direction.” Davis agrees: “Sometimes I think one of her songs is an old folk song, like Caleb Meyer, but then I look it up and it’s written by her. She’s just great at writing folk songs.”

‘You have to do what’s right for the song.’

“I think we’re always getting better. Over the years I’ve actually learned to play less. A while ago, when I was in school for harp performance, I just thought I had to be flashy on the harp; play as many notes as possible. And now I’m learning more and more that I don’t have to do that all the time. Sometimes simpler is better. Especially after getting into Neil Young, and realizing a song can just be one chord to four chords, and it can still be brilliant. My songs sometimes used to be way more complex, with a lot of chord changes. You have to do what’s right for the song.”

“Some of the new songs I’ve been writing are about stories from friends mixed with my life. I’ve kind of taken in everything that’s happening around me instead of just what’s happening in my life. And I’ve also been playing some songs by Cian. There’s one song that Alex wrote, and I finished. Those are not my stories, but sometimes I love singing those the most.”

Stop throwing your ideas away.

McCarthy laughs: “I’ve stopped writing purposely, because I’ve got plenty.” Davis: “Cian has so many songs! He needs to record them first. You can write with me though… We just moved into an apartment, so hopefully when we get back from Europe we can write more, together. It’s always different. Sometimes lyrics will come to me or I’ll have a melody in my head that I have to get down. I’ve been liking co-writing with Alex and Cian, because a lot of times when I have an idea and don’t know what to do with it, I just throw it away. It’s nice to have somebody to show the idea to who can help me develop and finish it. Someone to just get me going and push me to write more.”