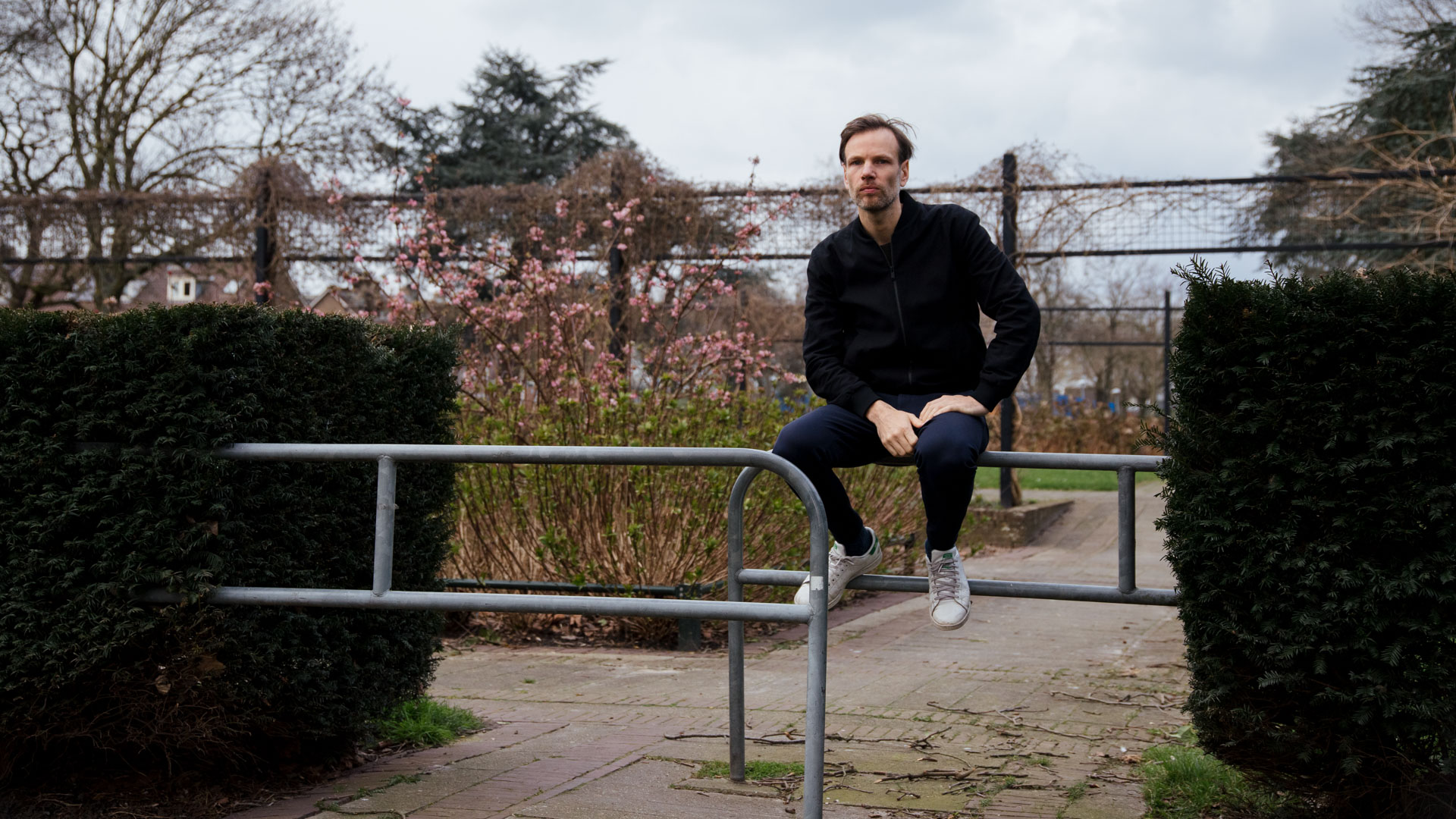 Job Roggeveen is an interesting and versatile artist. As a musician he played in several bands and started his own band Happy Camper, winning an Edison – basically the Dutch version of a Grammy. He’s also an animator, and as one third of animation company Job Joris & Marieke, he was nominated for an Oscar and won an Emmy. In the last year, he focused (musically) on his solo project: instrumental piano music, resulting in the record Gliese that was released last week. Earlier this winter, we met at the Dom square in Utrecht and filmed a session in the freezing cold, accompanied by visuals from Mr. Beam. Roggeveen covered Röyksopp, Massive Attack and Wu-Tang Clan.

Job Roggeveen has been playing the piano since he was seven years old. Not much later, he got serious, he tells me with a laugh. “When I was ten years old, I was already working on an album with a friend! We spent a year working on it and wrote over an hour of music. Recorded it with two microphones and cassette tapes. A pretty bizarre thing to do when you’re ten. Not that it was particularly good, but I heard it back the other day and there were some pretty cool melodies in there. And very high children’s voices!”

“But I think it’s extraordinary that we took it as seriously as children, we treated it as a real project. Working towards something, with dedication. I still approach music as a project: What does it take? How am I going to handle it? It may seem very big at first, but I work step-by-step. As a result, it’s not a big mountain I look up to, but I keep advancing more and more. A year or two years later you have something very cool.”

“When I was twenty, I listened a lot to instrumental hip hop. I was also part of the hip hop and drum ‘n bass scene in Eindhoven, because I was into design and graffiti a lot. A friend and I also made a magazine. So, I listened to a lot of hip-hop and I especially liked tracks with very nice piano lines. Those have always stayed with me. Often, I don’t like music that follows one form very traditionally. It’s cool when there’s an influence in it that you didn’t expect right away.”

Combining the dark and the light side.

“I feel like my music consists of three parts. Before I played with El Pino And The Volunteers, I had a band that made more Phoenix-like music, with electronics and synthesizers. Also, I was into triphop. At some point I started focusing more on film music, adding clarinet and violin. I started combining things. The combination of film music with pop music resulted in Happy Camper. I added piano pieces for pre-films and on the first albums also featured instrumental pieces. What I really wanted was for my music to reach further and adding all those singers made that happen for me.”

Happy Camper often sounded cheerful at first impression, with or without a melancholic undertone in the melodies or lyrics. Gliese sounds a little less decorated. Nevertheless, Job Roggeveen also sees similarities, he tells me at Café West in Utrecht, within walking distance of his home where Robert Ellis‘ recent session was recorded. “I realized that making up melodies is my strong suit.” After two acoustic records and one more electronic album by Happy Camper, Roggeveen wanted to focus on those melodies. “To create a composition from something I’ve got in my head. Happy Camper always had something euphoric, but with a melancholic undertone. Now I have focused more on that melancholy, but there is often a dark and light side in these pieces.”

Finding direction in a French monastery.

Roggeveen already had an idea which way his work should go, but really found direction in a former monastery in France. “The idea and the images behind the music deepened there. I had already been there once to rehearse with Happy Camper and thought that place could provide inspiration for this project. It was necessary to get out of my daily life. I really like spending a whole day working on music in solitude, but at the end of the day meeting other creatives. To relax and discuss the things we’re making, in a building where everyone is busy crafting a book, an album or a dance performance is very inspiring.”

By now he’s found a method to work on new music at home, in his daily life. “Each morning I play the piano and try to evoke that atmosphere as soon as possible. If I focus well enough, I’m able to make music anywhere. But other places can help push me in the right direction. I am already trying to see how I can evolve this style even further. There are so many pianists already, I want to distinguish myself in the melodies I write. It’s nice to add a vocalist and other instruments now and then. Violins, percussion, clarinet or a choir. I think I can refine my style in that.”

“I listen a lot to film composers and I’m a fan of Nicholas Britell, who also did the music for Moonlight. A lot of composers would only write for orchestras or a string quartet, in a very classical way. I listened to an interview with Britell, where he said he also experiments with pitching, or weird samples in combination with strings. Our generation is more inclined to use all available tools, to create a beautiful atmosphere. If I record a piece and think it’s too fast, I just pitch it. Whatever works.”

“I think classical musicians might think that’s not done, but to be honest I often don’t like the recordings of classical music. Thinking about sounds and atmosphere is very important, especially in the recording.” Alongside producer Martijn Groeneveld of the Mailmen Studio in Utrecht, Roggeveen searched for the right sound for Gliese. “It sounds quite muted now, but still with lots of overtones. This makes the piano sound very typical.”

Have a little faith in me.

“I have had to learn to trust in my qualities as a composer. Now I feel no need to add any more sounds than strictly necessary.” Early in their careers, more musicians tend to over-arrange anything and everything. Sometimes because it adds something, but probably also out of uncertainty. The rich arrangements act as a shield that the musician can hide behind. Job Roggeveen recognizes this: “It’s uncertainty. Maybe I was hiding behind all these other singers, too. To not be up front and shift the responsibility and attention away from me a little bit.”

“It has a parallel with animation. There’s a saying that animators are really shy actors. It seems like we’re just making things move, but as an animator you’re constantly trying to figure out what a scene is like and how you’d portray it. Let’s say someone’s insecure. How does he behave? I let a character do that, instead of standing in front of the camera myself. That’s similar, because I put something between myself and the outside world. Now I’m at the front by myself. This is me.”

With Happy Camper and its success, there came a time when people had certain expectations and Job Roggeveen felt a lot of pressure all the time. “I really had to do something else. If you find that something is successful, or that something is going well, then you want it again soon. That natural tendency, I try to avoid as much as possible. I just want to create something that feels right. It doesn’t matter what happens next. I wish I always had the guts to choose something where my interest lies. Regardless of which direction it has. Without me knowing if anyone will ever listen. That’s pretty hard though.”

With Gliese, Roggeveen succeeded in that very well. “I did exactly what I wanted. When you produce a record, you spend a lot of time on your laptop. With Job Joris and Marieke I’m already doing a lot of things, so I just wanted to play the piano. That felt really good. Composing instrumental pieces, I want to evoke a certain feeling. There isn’t a story I’m telling, and it’s not literal translations of my own feeling at that time. Halfway through the piece, I try to turn that feeling around. It’s like looking at the same subject in a different way.”

Now he is slowly getting back to working with others. “With singers, but especially with lots of different musicians, playing instruments that I can’t play. Other people’s drive gives me energy. I’ve been writing a lot recently. Later, I’ll see what kind of project it becomes. A new Happy Camper, or a second solo album with some vocals on it, I think the latter, but it could still go either way. I’m really glad I went this way. For now, it’s going to be this.”