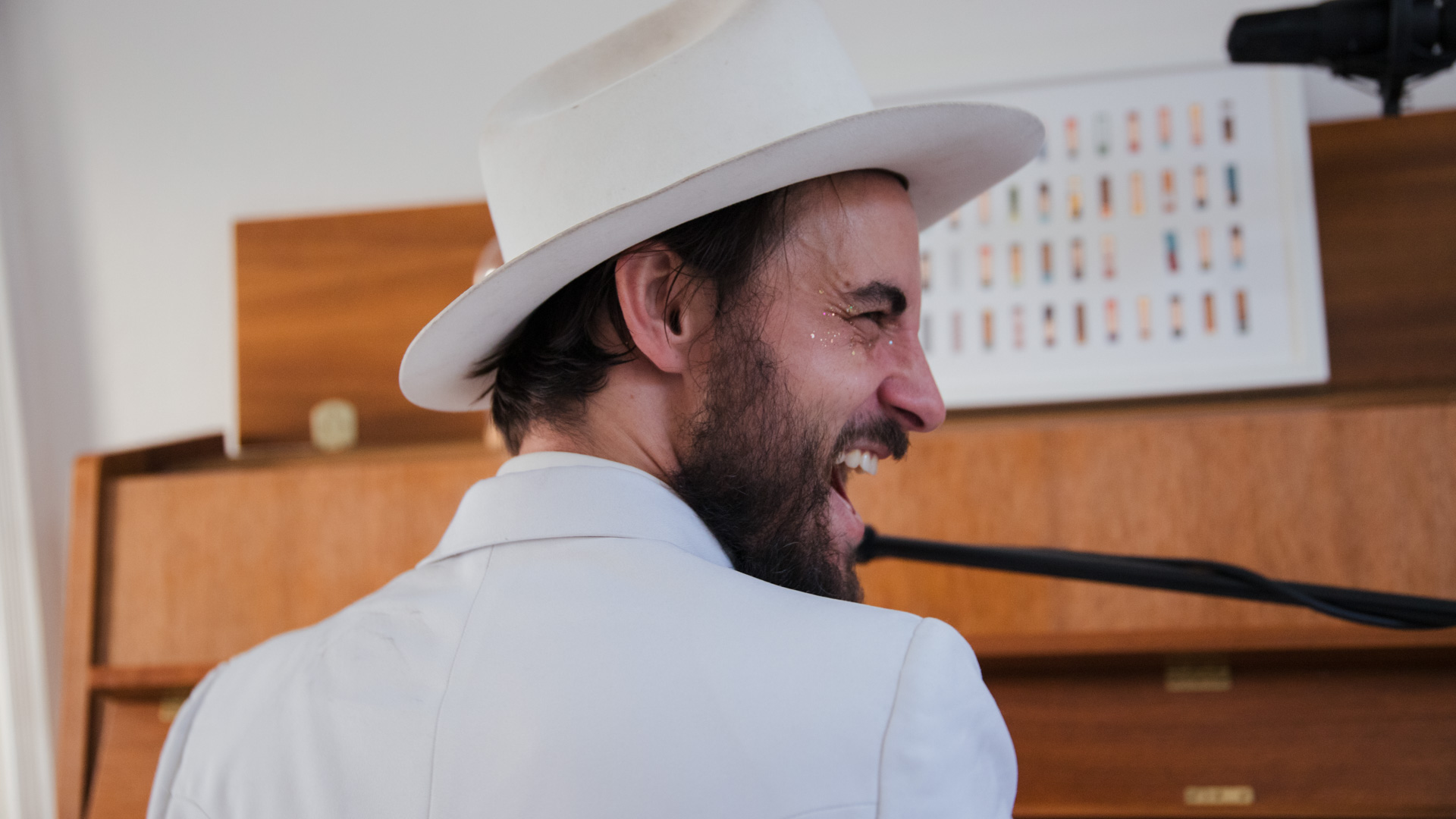 I have so many fond memories of the first session Robert Ellis recorded for The Influences years ago, I jumped at the change to do it again. In the fall of 2019, Ellis and guitarist Kelly Doyle joined me in Job Roggeveen’s living room in Utrecht and recorded impromptu covers of Joni Mitchell and Gene Wilder’s Pure Imagination, and Let Me In from his latest record Texas Piano Man.

Nothing wrong with Robert Ellis’ imagination.

“I’m very glad we recorded Pure Imagination. We had never played it before.” The session in Utrecht had similarities to the first session we filmed years ago; Robert Ellis and guitarist Kelly Doyle seem to just sit down and figure songs out on the spot. They did it then, and they did it again this time, with the Gene Wilder cover. And it all magically comes together, it seems. “It’s much more fun this way. I never like playing things in a way that I already know really well. It’s never exciting.”

Well, it was exciting to witness this in Utrecht. In Job Roggeveen’s living room to be exact. You might know Roggeveen from his animation studio Job, Joris & Marieke, his band Happy Camper or the solo piano debut LP he just released last week. Or you might know him from this website’s logo, because he designed it. Lastly, keep an eye out for Roggeveen’s own session, coming up soon on this website. Back to Robert Ellis and Kelly Doyle: why this song?

“I always liked Pure Imagination. I’ve been thinking a lot about that category of songs, like that song, When You Wish Upon A Star, Somewhere Over The Rainbow, What A Wonderful World… Classic songs that are very mainstream, but still extremely important. The lyrics… Everyone would agree that Pure Imagination, though it’s from a children’s movie, is deadly serious. The lyrics are just so good! Gene Wilder embodies that role so well. It’s a very important song, despite the movie.”

“I just really love Joni Mitchell. Blue was the first record that I heard of hers when I was about seventeen years old and it really spoke to me. I sort of became obsessed with her; her vocal phrasing and her songwriting. Then I got deeper and deeper into her genre bending, exploratory, musical mind. She was playing with some of the best jazz musicians on the planet, making really strange music that defies genre. I’ve always really admired her for all of that stuff. And I like all that stuff just as much as I like her earlier folky work. Something about her personality is very affective.”

“I used to cover much more obscure songs from artists that I like. Usually I didn’t want to do a greatest hits song, but something from another record, that wasn’t a single. Lately I’ve been thinking: I want to record the American Songbook, I really do. Just to give it a go, doing the world’s most popular songs: Yesterday by The Beatles, My Way by Frank Sinatra, you know? As you get older I guess you become less cool, you know? Basically I don’t give a fuck.” Ellis tells it with a hearable laugh, but is deadly serious too: “I want to do Frank Sinatra songs. Every one of my favorite older artists have done it, like Willie Nelson for instance. Neil Young even has a big band record!”

It’s no wonder that Robert Ellis admires Mitchell for bending genres, because in his own career – from starting over a decade ago to his fifth record on New West Records Texas Piano Man in 2019 – he himself has evolved and changed genres, styles and rules. If there ever were any rules in Ellis’ playbook to begin with. “An album is such a little microscope. If you only have one, that’s what people know about you. My mother was a piano player and I grew up playing jazz. I also liked country and as a kid I played at bluegrass festivals, and it all mixed together.”

“Photographs (2011), in my mind the A-side was folky music and the B-side was country music. At the time, I thought it was obvious that I wasn’t going to be one thing. In retrospect I guess folk and country are so similar, that it didn’t sound like much of a departure. As my career progressed, I always just followed whatever was interesting to me at the time. Sometimes that’s jazz, sometimes it’s noise and improv music… You only get to be interested in what you’re interested in. You can’t really choose it. I guess I have musical ADD, I like a lot of different kinds of music. At times I’ll go: ‘Oh that looks fun, I want to do that!’ So it’s just inevitable that it’s going to come out.”

“The idea of genres confuses me.”

“It’s only natural for listeners and marketeers to put things into boxes and to compare it to other things. If you’re going to share it with someone, it’s much easier if they’re already dealing with similar territory. I don’t fault them, but I do think that to passive listeners esthetics are super important. What’s the genre called? Or the subject matter? How does it feel? Then there are other listeners who’re interested in completely different aspects, that’s the category I fall into. I listen a lot and certainly in a different way than others.”

“Often the idea of genres confuses me. ‘Wait a minute, that to me sounds nothing like what you say it is. Especially in pop music lately, there’s some cool stuff happening. Some of my favorite music in the world has been presented under disguise. You’d conceive Willie Nelson as just a regular country artist, and yet, he’s writing and playing jazz changes, you know? It’s sold as country music. A convenient disguise that allowed a regular person who would proclaim he didn’t like jazz, to still love Willie Nelson.”

Having done this for over twelve years, Robert Ellis has learned inspiration comes in seasons. “I used to stress out when I felt like I didn’t have time to write but not anymore. There will be a season where I’m really creative and write, followed by one that it seems I’m not creative, but I am creative in other ways. Then I’ll focuse that energy somewhere else. Maybe it’s touring, or designing or building a home. You put the energy into other things. I’ve learned to stop stressing about it. If I have an idea, I’ll chase it down. But most of the time, I’ve got to wait until it’s time.”

“I started writing really young. Because my mom played and wrote songs, it felt natural. I’ve been playing both piano and guitar since I was very little; I wasn’t much older than my child is now. He’s nineteen months and sat down this morning and we were playing the piano before he went school. I’m hoping he’ll take to it. He just bangs on it, making noise. I don’t think he’s ready to learn songs yet haha. But it’s really fun, I just want him to be exposed to it so it feels natural. The thing with children is: you don’t have to teach them how to dance. I feel like my son knew how to dance without anyone showing him. It’s interesting to me. When he likes something, he just moves around.”

“I’m very concept driven and outside of music I haven’t developed many skills. On Texas Piano Man I was very obsessed with the way the esthetic would look. Designing the whole character, creating the outfit, the record cover and the music videos. I did the concept for all that stuff, but had more capable people execute it. My wife’s a film maker, she knows what she’s doing. She’s directed all my music videos, she writes and she’s working on a feature right now. I know to leave certain things up to the people who’ve learned really hard and know how to do them.”

Ellis also produces, consults and plays on other people’s projects, like Nicole Atkins‘ Goodnight Rhonda Lee. The variation between writing, playing and working with other musicians works well for him, he says: “Right now I’m producing a record for this guy called Belaver, so I’m focusing my creative energy on his record. I’m not really thinking about my own music. Once that’s over, I’ll move on to other things, or I’ll have some time to write. When you practice on the piano a lot, you get better on the guitar. And when you practice guitar, you get better on the piano. It’s all good.”

A Case Of You (Joni Mitchell)
Spotify | Apple Music