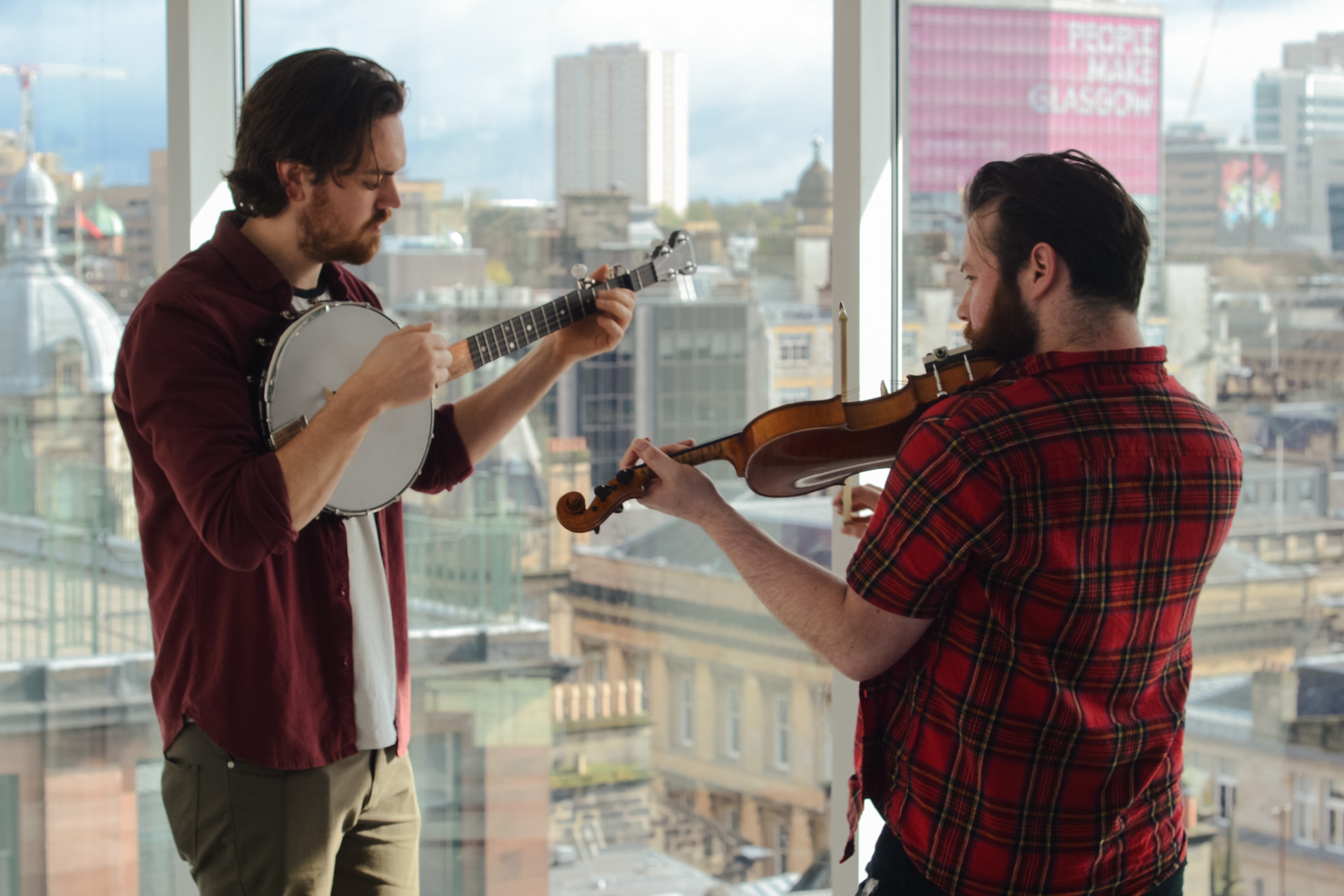 Some time in the Spring of 2017 I flew to Glasgow Scotland to film Ryan Joseph Burns’ album launch. That night in Saint Luke’s, I single-handedly filmed with six cameras. To compensate, I got up (too) early the next morning and met up with Farmer & Lewis to film at the viewing platform of The Lighthouse museum. With just one mic, one camera, a banjo, a fiddle and a stunning view of Glasgow’s city center. Eight years after the first time I filmed at the same spot, we recorded three traditional songs.

A farmer with a pulse

Now you might recognize one of the two from earlier videos on this website. Mark Farmer, the one with the fiddle, used to be the lead singer of The Seventeenth Century! The band that I discovered on my second visit to the city back in early 2010, a decade ago this month actually, and started bringing over to The Netherlands. Sadly, that band disbanded after releasing two EP’s and recording an unreleased debut album. Which is bloody brilliant by the way, if you want to hear it, come over for a coffee and I’ll let you hear it. But from that band, multiple other projects were born, like Ryan Joseph Burns‘ solo project and Michael and Andrew Truscott’s Kinbrae. So not all it lost. Farmer has been doing all kinds of things, and I was very happy to hear him sing again with his characteristic as ever voice.

This session has been waiting to be released for a while now, I don’t really know why. It just happens, I’ve been filming so many. But it also gives me a chance to rediscover them before posting, and to find out I still really like what we’ve filmed. It was very early after the night before, and it was all very spontaneous, easy and fun. With a shaky hand and a dusty lens, but who cares? These two fellows, Mark Farmer and Lewis Macleod, who’s also founded a brilliant design and manufacture company called Hame, bring you three traditional folk songs and we all hope you’ll enjoy them.

A big thank you to The Lighthouse for welcoming us in last-minute and to The Glasgow School of Art for accommodating me on that whole trip. God, I can’t wait to be back in Glasgow.

Thanks
The Lighthouse
The Glasgow School of Art
Craig Laurie