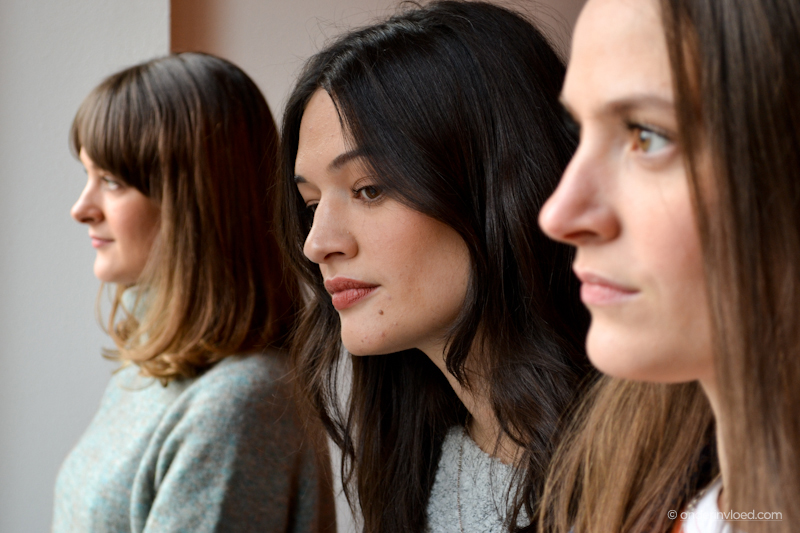 It started as a rather sucky day when I went to Amsterdam to film this session. It was the first really sunny day in a while, but my head was pounding and it was hard to focus on anything else. Luckily these three English sisters were able to do what painkillers couldn’t: The Staves played an incredibly beautiful session and drove the pain away.

It’s hard to remember when I first heard of The Staves, but it was sometime after the release of their album Dead & Born & Grown in 2012. There was a video of them performing with Keaton Henson. These three sisters from Watford, England have voices that combine in a matter that almost only brothers and sisters seem to achieve. I obviously don’t have scientific proof, but there are plenty examples of siblings whose voices appear to harmonize extraordinarily beautiful. Emily, Jessica and Camilla Staveley-Taylor certainly have that talent.

Things are going well for The Staves

Anyway, since that album they’ve come a long way and having toured with The Civil Wars, Bon Iver, recorded with Tom Jones and Fionn Regan, they are now releasing their second album If I Was, which I cannot recommend highly enough. They recorded the album in Justin Vernon’s (Bon Iver) studio April Base in Eau Claire, Wisconsin USA, featuring some great musicians, amongst others Brad Cook (Megafaun), who used to be in DeYarmon Edison with his brother Phil Cook (who recorded a session for us just recently) and Vernon, before they started Megafaun and Vernon became Bon Iver.

I digress. When we filmed this session, The Staves were touring as support for Angus & Julia Stone. After the show that night they had to run and catch the IDFA premiere of the Austin to Boston movie in which they feature touring with 5 old VW camper vans alongside of Ben Howard, Nathaniel Rateliff and Bear’s Den. It only goes to show things look like they’re going well for them. And they should.

Justin Vernon: ‘Unlike anything I’ve ever heard.’

In the mini-documentary by director Dan Huiting and editor Lauren Josephine that preceded the album on YouTube, both the Staveley-Taylor sisters and Justin Vernon speak about the recording process and working together. It’s a very nice video, in which Vernon has nothing but praise and marvel for the group. “I became familiar with The Staves from an EP that was given to me by a friend. I asked them to support us on a tour and when I heard them singing it’s really like physiological; their sisterhood and their relation. The combination of their voices is unlike anything I’ve ever heard. Because I care about them so much, I wanted to invite them here which seems like such a safe place to them, to muster all their ideas, give them the runway and tools and watch them grow. It’s undeniable, when you hear those voices… (…) That comes from a well of family, history and something that you just can’t get. That is the magic of The Staves.”

‘The most natural and honest we’ve been able to be.’

One of the sisters says: “I think this is my favourite place to be, to make music. It’s such a special place, it’s just magical.” The three are obviously fond of the April Base studio in Eau Claire, Wisconsin. “To have this space and to be surrounded by nothing but a lot of trees… It’s been really freeing to actually have the time and freedom to explore and expand on sounds, lyrics and vibes. It feels like us kind of stretching out.” Jessica, who speaks the most in the documentary, adds: “For me, this album is a departure from what we’re used to. I think it’s been so uninhibited and honest.”

“It’s very much an album that’s been born from being away from home a lot and being on tour. We wanted the first album to be an honest representation of what we were on stage, but since then I think ideas and ambitions have grown. This feels like the most natural and honest we’ve been able to be in front of a microphone. So I think we feel like this is us, at the moment at least.”

Enjoy the magic of The Staves

Vernon concludes the documentary: “On a really serious level: You meet a lot of cool people in music, but it’s really rare when you locate people that feel like extremely important to who you’re going to be. That’s what it feels like with Emily, Camilla and Jess.”

It feels unnecessary to add much more to this article after all the above. So why don’t you just go ahead and enjoy the magic of The Staves yourselves, with covers of Bruce Springsteen and Sufjan Stevens and their own.