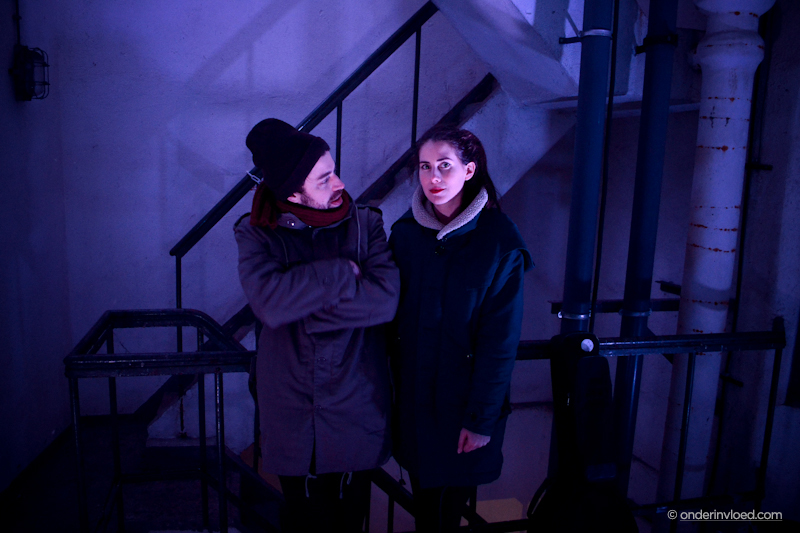 When Elke De Mey confirmed to record a session for Onder Invloed at Grasnapolsky, I was really pleased. The Love Like Birds’ EP from 2011 had impressed me a lot, and her session didn’t disappoint in the slightest. Boyfriend, producer and Balthazar-member Jinte Deprez joined the singer from Ghent, Belgium on one of the covers.

The first cover she played is of the Swedish songwriter Emil Svanängen, who goes by the name Loney Dear. “I chose to cover Loney Dear’s I Love You (In With The Arms) because there’s so much meaning in those lyrics. So much emotion, especially when he sings it live. I can relate to it. “Off with the devils, off with what’s keeping me down. In with the arms, in with what’s keeping me calm.””

De Mey is a friend of Loney Dear’s Emil Svanängen: “I met Emil in Brussels. I was dancing at his show, in the front of the room of a small, cosy venue. After the show I walked past him and gathered all of my courage and told him: “Emil, I love you”. I wanted to leave him alone after that, but he came after me and we ended up talking the entire evening. This was seven years ago now. We used to Skype sometimes and he’d play me a song when I was sad. Or he’d play puppetry with finger poppets. We still email and text every now and then. He’s happier now, not that sad anymore, which makes me really happy.”

Besides being friends, De Mey admires his talent first and foremost. “He’s extremely inspiring as an artist. He writes the most striking and sad lyrics to very cheerful music. He plays with words and captures things so beautifully, without covering stuff up.” The other song she covered is Train Song by Vashti Bunyan. “Train Song is a lovely calm song. It’s very sweet, without becoming too mealy. This is another song I can relate to. Looking forward to seeing that person while you’re travelling a long way.”

She grew up mainly listening to hit songs and boy bands. “In high school my musical taste became just a little bit louder, with 3 Doors Down and Linkin Park, until I discovered Cat Power, Damien Rice, Sufjan Stevens, Laura Marling, Loney Dear, Rivulets and some others. They’ve all influenced me a lot. I used to play their songs a hundred thousand times until I found my own voice. One day I felt like trying it myself, that’s when I wrote Manic. Especially Cat Power influenced me, because my natural singing voice is close to hers. And what a great woman she is!”

It’s interesting to see Love Like Birds develop into a band or act that’s getting more and more well deserved attention. Some of the credits seem to belong to Jinte Deprez; De Mey’s boyfriend and singer of the incredible Belgian band Balthazar, who’ve just released their new album Thin Walls. “I’ve always played music for myself, and I still do. The recordings happened because of my boyfriend, who couldn’t stand to listen to the very horrible recordings on MySpace any longer. Together with Gertjan van Hellemont of Douglas Firs, he recorded a couple of my songs. Luckily, he’s very perfectionistic and very good at what he does. So I gathered two great illustrator friends of mine (Nina Vandeweghe &
Liesbeth Feys) and some pictures by Charlotte Boeyden, and let them make the artwork. Sent it all off to be pressed and a few weeks later I had boxes full of my EP standing in my hall way.”

De Mey admits she was extremely nervous when they started to record. “I had just written a couple of songs, that’s all. I didn’t really think people would actually put in time and effort for me, especially without being paid for it. But I happen to have incredible friends. It was really nice, they put me at ease, we had breaks in the sun, and when I listen to the recordings I still hear that I was in my element. I wouldn’t have wanted to do this with anyone else than them.”

She won a contest on Studio Brussel and Radio 1, got airplay and the ball started rolling. “I got a fantastic agent called Daan De Bruyne of ToutPartout, went on an European tour as the support act of Dark Dark Dark and played in incredibly beautiful venues. I had never imagined getting anywhere but a living room or a small bar. I’m enjoying it as much as possible, because they are fantastic adventures with fantastic people.”

There’s a good music scene in Belgium, according to De Mey: “I don’t see a lot of competitiveness. The other day I was at the premiere of the movie Whiplash. It turned out every musician of Vlaanderen was there! I had a lot of fun conversations that night. They all sort of know what everyone has been doing, ask each other for tips and help each other get in touch with other people. It’s great!”

She’s currently working on a second Love Like Birds EP. “It’s certainly in the same style as my first EP, but maybe you can describe it as if I went from the bedroom to the living room; Still very intimate, but just a bit grander. It’s exciting!”

I Love You (In With The Arms) (Loney Dear)