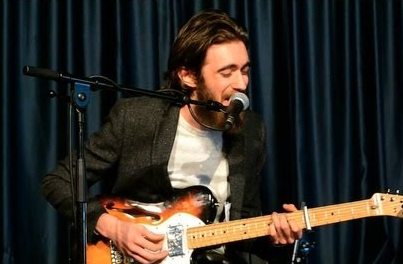 I’ve had two weeks to think of a sufficient way to describe the weekend we had at the Into The Great Wide Open festival on Vlieland, but I’m afraid I’ve not had much luck this far. The location of our stage was even better than last year, the crowds were bigger and the musicians as good as ever. Keaton Henson‘s show in the local church the day before, made me even prouder he did this session for Onder Invloed.

Henson himself probably had not prepared himself for the welcome he got from the audiences at his first ever live shows in The Netherlands. The church was loaded with people, there were even some standing on shoulders to look through the windows from outside, as was the Bolder; the indoor venue where we had to move our Sunday program to because of heavy rain earlier that day.

Henson, who doesn’t play live that often, made the effort to do this session in the nick of time before embarking on the ferry trip back to the mainland. We’re more than grateful, to him and his half Dutch half English cellist Reinoud Ford for working this into their schedule. And of course to everyone at Into The Great Wide Open for having us for the third time. Hopefully we can stay a part of this amazing festival for years to come.

The songs played in this session are:
1. You (Keaton Henson)
2. Be Kind To Me (Michael Hurley)
3. Can’t Help Falling In Love (Elvis Presley. Written by Hugo Peretti, Luigi Creatore & George David Weiss)

Keep checking onderinvloed.com for more sessions from Onder Invloed at Into The Great Wide Open 2013. Or like us on Facebook and stay up to date.