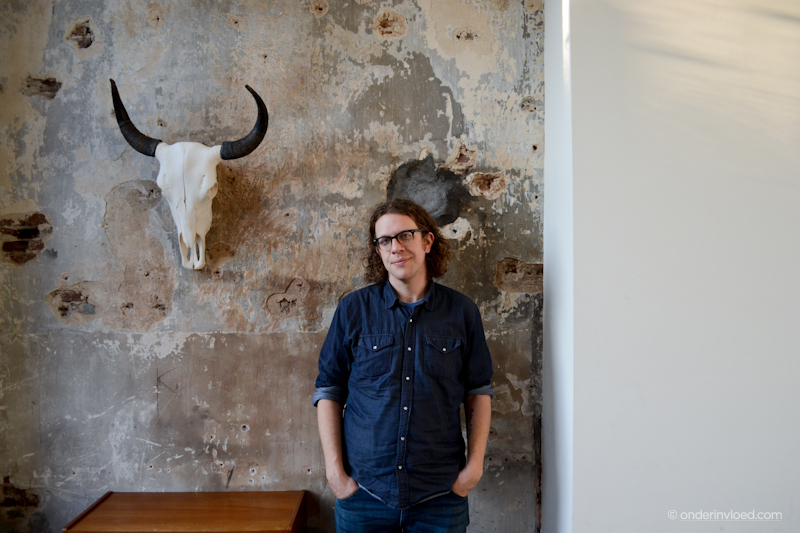 Early in 2014 I filmed a session with Michael Taylor a.k.a. Hiss Golden Messenger, because I had become addicted to his records. Learning more about his music, I found out he was friends with fellow Durham, North Carolina inhabitant Phil Cook. Cook and his brother Brad formed Megafaun, and Phil was now working on a new solo record, after releasing an album as Phil Cook & His Feat in 2011. This month Phil Cook’s record Southland Mission was released and I kid you not, it blew me away. But, that was no surprise after filming this session in February of this year, a couple of hours before Cook played at EKKO in Utrecht with Hiss Golden Messenger.

Read an interview with Phil Cook below the videos. This session was recorded backstage at music venue EKKO in Utrecht.

Take Your Burden To The Lord (Washington Phillips)

Sitting On A Fence Too Long

If you’ve ever talked to Phil Cook or seen him perform, you’ll know what I mean when I write that he leaves you somewhat happier than you were before. The love for music and his friends or band mates just radiates from his face. Luckily all of that noticeably went into the record as well. Cook’s eyes lit up when I asked him about Michael Taylor, or Washington Phillips. This session was easy to film, at the dressing room of EKKO, because all of these videos were done in one take.

There’s a thread between the two songs that Cook covered. ‘The source is Washington Phillips, a gospel artist in Texas. He’s the epitome of 1920’s obscurity. He disappeared and people have written dissertations about what they think he did. More than one person got their doctorate degree entirely based on that subject.’

‘Then there’s other people like my hero Ry Cooder, who’s just a filter. He’s wide open. However it all jumbles up in his brain and comes out of his fingers… I’m interested in his versions of things. In 2015, I get a chance to look back at not only the source material, but also the entire generation after that, and all those players that were filtering that into their own sound. I kinda tend to gravitate towards people that really incorporate an element of dirty swing and good syncopation. Embracing that, that’s why I really love Lowell George and Willis Alan Ramsey. A lot of those Texas guys were great. Ry Cooder’s just my favourite, because I love his sensibility.’

All the music that Cook cherishes now are all records that were sitting in his dad’s vinyl collection when he was a kid. They’ve always been there. ‘They weren’t necessarily records that were played at the house all the time, you know what I mean, but it was sort of a library that I had access to. So as I explored music when I was thirteen or fourteen years old, I discovered the blues. It started in a funny way, with The Paul Butterfield Blues Band; a mostly white Chicago blues band from the sixties. From there it really obviously transferred to Muddy Waters, Hound Dog Taylor and J.B. Lenoir. They opened the path for me. I think the best artists are the people who open the door and unashamedly and welcomingly open the door to the past. They want to invite you through and say: “Look who I learned this from, this is way cooler than me”, you know? “It’s not about me, it’s about this. I’m just here to tell you about it”.’

Musicians who filter their influences through their own music, are a recurring aspect in Cooks taste. ‘It’s funny that a lot of my favourite records, like Giant Step by Taj Mahal, Boomer’s Story by Ry Cooder, Bonnie Raitt’s Takin’ My Time, were all done in the same time. They were all listening to this canon of music from the 20’s, 30’s and 40’s, and really filtering it out. The advantage of being in this time we’re in now is being able to see all the layers and, if you want, to sort through it. There are infinite windows in the past and in the present. If you have the time, go for it! It can be overwhelming, but it’s not if you find your own thread. Find it and follow your own thread. As long as your moving on something, that’s what’s really important.’

‘It’s interesting to see the shared song catalogues between different regions. My favourite gospel group, The Staple Singers, were doing half the same catalogue as The Stanley Brothers were singing.’ Cook loves putting those pieces together. ‘As time goes on, I do have a copy of all my favourite records that have my dad’s college handwriting on them. It’s great to have that history too, of my dad being my age going out to buy a Taj Mahal record and spinning it in his room with a joint and headphones on. That’s the same shit I did. The only difference being that my copy was pretty beat-up, because he listened to it a lot.’

Cook sr. was a musician as well, his son explains. ‘Absolutely. My dad took piano lessons all the way up to high school and played in a few bands, but mainly just played by ear. He played a lot of boogie woogie piano at the house and I remember my brother and I dancing all around the piano as little kids.’ When asked if he uses that same vibe in his own music, Cook laughs: ‘Hell yeah man! My dad made a choice for a career in health care, but always kept playing. A lot of the tendencies he had, I took in. I just went way further into the path. He sparked something in me and I ran with it. I played piano from when I was three or four years old all the way through to my senior year at college. After all those lessons, I was done with the piano so I picked up the banjo and started playing that finger style guitar stuff. It was more portable and I could apply my piano dexterity and my understanding of rhythm and harmony to it.’

For practically his whole life, Cook has played music with his fourteen months younger brother Brad, who now manages Hiss Golden Messenger and William Tyler. ‘He’s a different case. He’s had all this music inside of him, but didn’t have a medium to let it out until he was sixteen. I was always playing, even as a little kid. Brad always had a huge music collection; he had hundreds of albums when he was eleven or twelve.’ Brad Cook recently played bass at and was assistant producer on The Staves‘ newest record If I Was, which was produced by Justin Vernon, who also sings on Southland Mission. ‘Growing up it was just the two of us, so the whole time growing up we were going through the same shit at the same time. That was great.’ Cook continues after a little pause: ‘It created some tension but it is great now that we’re both grown man that are married, it’s like we’ve earned all of our stripes. We’ve earned all the arguments we’ve been in and the victories we’ve had together. I can’t trade the love we share for anything in the entire world.’

For five years, Brad and Phil Cook, completed by Joe Westerlund, spent most of each year on tour with Megafaun, who released four records. ‘When we’d make a record it’d take a long time, sometimes six or seven months. It can be so exhausting. You’d second guess things, and have so many choices to make. So I’d come home and go sit on my front porch to try and not think about it all. I’d sit there and write little songs that turned out to be a lot of fun.’ It was a very informal setting, as Cook outlines: ‘I’d sit down with a microphone that I’d borrow from a friend, take a Wednesday and do two takes of every song I had. I mixed it the same night and it would be done. It felt so liberating to leave all the mistakes on it. “This is how good I am today.” So I did three different records of instrumental music, all made in one day. That was fun, I might do it again some day.’

‘But I had these songs that I’d written on piano that felt bigger, there was more going on and simultaneously I met Michael Taylor of Hiss Golden Messenger. That guy changed my entire life.’ Taylor has said that exact line about meeting Cook. ‘He’s opened up a million portals; I’ve grown so much as a musician by playing in Hiss Golden Messenger. Seeing how Mike plays music and what he focuses on. It’s liberated so much in me and so he’s a huge reason why I decided to make my own record with a band.’

Cook had a pretty good idea how he wanted to approach it. ‘We’re going to rehearse this shit, we’re going to go to a real good studio and make a real thing. So we did that in 2014, and my brother and I produced it together. It’s got all of these North Carolina musicians on it. It’s got fiddle and mandolin, and all these traditional instruments. On almost all of the record you could play a second line New Orleans beat. It’s got all of these elements of things I’ve come to love in American music. The biggest thing was finding really good musicians that I really get along with well. Luckily that’s not hard to do in North Carolina. There are a lot of them.’

Phil Cook is currently on tour supporting The Tallest Man On Earth, so check out his website for the dates and go see him play.