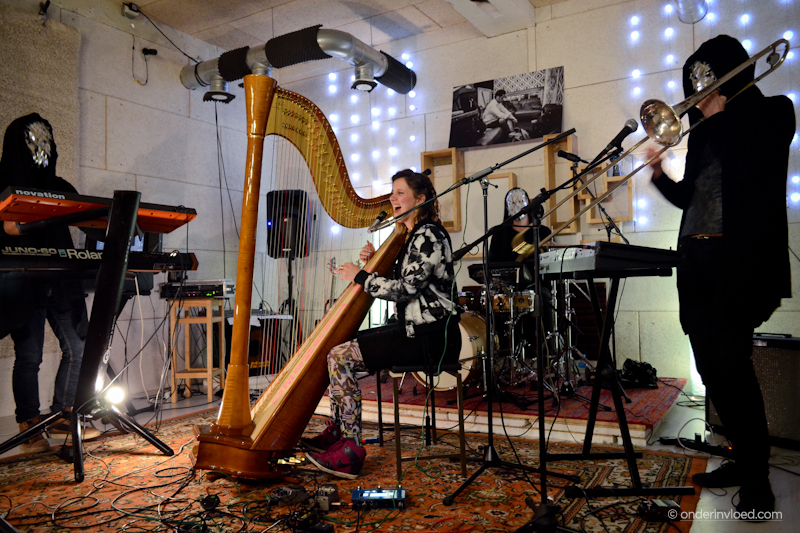 Almost a year ago, there was a big harp in the water tower that had to be carried down some stairs before one of our sessions at the Grasnapolsky festival. That harp belonged to Rosalie Wammes of Oh Thunder who had just played her own session there. When I got back home I looked up some of her music and although it took until the end of the year, I was very happy to film this session with her band.

Read what Wammes wrote about the covers she played below the videos.

Unravel
‘In my teenage years I used to wake up on Sunday mornings to my dad playing either Björk or Stravinsky super loud over the speakers. When I was about 17 years old I started to listen to Björk myself. She is a great inspiration, I admire the way she experiments, seeks collaborators, and gives a visual language to everything she does. It’s like each album is an expedition to a certain sound, technique, instrument or even landscape and she always comes back with beautiful and exciting discoveries. The way she implemented the harp in pop music, and her harp player Zeena Parkins, were very inspiring for me as well. Unravel is one of the most beautiful songs out there: A beautiful simple and pure melody over a deep beat. I also love the woven texture of the micro-beats and sounds that embed the beautiful melody. This song really tugs at the heartstrings.’

Little Dragon
‘As a band we are really inspired by the playfulness and sound of Little Dragon. You can really float into their music, especially with Feather. The chords changes really lift you up and the synths get you in this dreamy mood. It’s addictive music and the voice of Yukimi is really great.’

Borders
‘I really wanted to play a song by M.I.A. because she is such a powerful and fearless artist. She is a fighter and I find it very interesting how she uses her history and politics in her songs. It was a bit hard to find the right song for us to cover but then Borders came out. It’s such a relevant song and I felt it would be right to cover this song and use it to express our feelings about the reaction of Europe on the refugee-crisis. It’s a modern protest song. To fully understand the power of this song you need to see the video that accompanies it.’