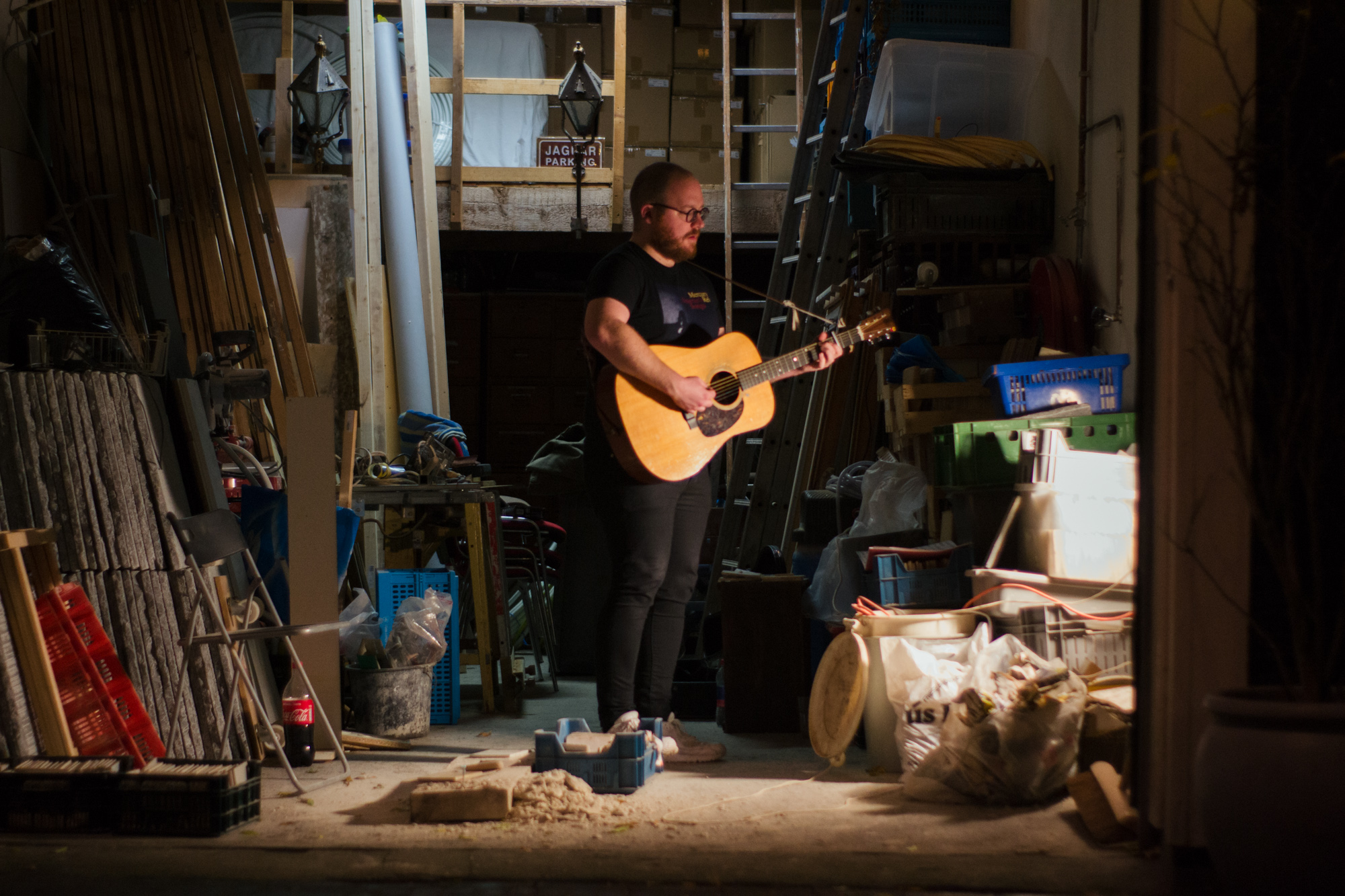 ‘What I’ve learned from Scott is that kind of pride in songwriting; being able to put yourself into it, the drive and ambition for yourself in music.’ Last week, Frightened Rabbit released Tiny Changes: A Celebration of Frightened Rabbit’s ‘The Midnight Organ Fight’, a collection of covers by an impressive group of musicians like Josh Ritter, Chvrches, The Twilight Sad, Biffy Clyro, Aaron Dessner and Fiskur – Ross Clark’s current band. It obviously wasn’t easy for Clark to play this song live for the first time, when we filmed it as a tribute to his friend who passed away earlier that year. But I’m glad he did, because it’s beautiful in more ways than one.

The only time I saw Scott Hutchison play was at Stereo, a music venue on Renfield Lane in Glasgow, where my friend Ross Clark opened for the Frightened Rabbit-singer’s solo performance. In 2010, I think. I got to know his music through Clark and some other Glaswegian friends, and over the years have learned how much it means – and he meant – to so many people.

You have seen Clark on this website many times before, mainly with his former band Three Blind Wolves, but none of those shoots were anywhere near as emotional and real as this one. Hours before his show in Amsterdam with We Were Promised Jetpacks, we walked around the city center in the rain, trying to find a place to film. Here comes this workshop, where a man is renovating and cleaning antique tiles by hand. The good man allowed us to take over his place for fifteen minutes and film this.

Clark and I talked about his friendship with Scott Hutchison, please read it below the video.

Ross Clark: ‘Scott had asked me to do a cover and told me I could pick whatever song. A few weeks went past and he never told me when it was supposed to be in for. And then he messaged me: “Oh, it’s supposed to be in next week, by the way.” I was like: “What the fuck, you didn’t tell me!” So I just picked my favourite song on the record which was Good Arms vs Bad Arms. It’s one of his songs that deals with break ups in a funny way. Scott was able to deal with heart situations in a kind of comical way. We had a shared sense of humor. The lyric: “I am armed with the past, and the will, and a brick” is an example of that kind of dark, black humor that I always liked in Scott’s writing. Just the whole arrangement really appealed to me from the first time I listened to it.’

‘This song was a jumping off point for what I wanted to do myself.’

‘Before Midnight Organ Fight had been recorded, he would send people copies of the demos. We met up for a pint at Tennent’s Bar on Byres Road, and he gave me this cd and said: “Oh you’re gonna really this song Old Old Fashioned.” I remember hearing that song and saying: “Oh yeah, that’s really good, but Good Arms vs Bad Arms jumped out first.” He was really annoyed that he got that wrong, haha. I recorded mandolin on Old Old Fashioned for Quietly Now!, an acoustic album was recorded live at the Captain’s Rest, so everyone associates me with that song. But it was never my favourite, it’s a good song, but I just liked the other one more’, Clark laughs. ‘For me Good Arms vs Bad Arms was a jumping off point for what I wanted to do myself. It was inspiring to hear the humor in the lyrics, and the wit.’

‘The feeling of the recording of Good Arms vs Bad Arms inspired me a lot. A lot of the times when you think of songs you talk about them as a fan, or about how a song came out at a certain time for them. I don’t have any of those stories, I hadn’t experienced anything that Scott had so I didn’t have a frame of reference, connecting to the lyrics in that sense. It was his artistry and the amazing songwriter skills that bowled me over about that song and all the others. That one in particular got me going. There’s a pride and a sort of swagger in it, that’s not immediately apparent. But if you knew Scott you’d get that.’

‘I had to change it completely. Scott was one of my closest pals and musical mentors, so I wasn’t going to just do a carbon copy of him. I wanted to put my own stamp on it, so I just went at it like any other Fiskur recording we’ve done. We tried to make it less folky and more pop and upbeat. Because I respected Scott so much as an artist and musician, it’s almost like trying to show that I’d been listening to everything he’d said over the years. You know?’

‘What I’ve learned from Scott is that kind of pride in songwriting; being able to put yourself into it, the drive and ambition for yourself in music. Not letting anyone tell you you can’t do anything you want to do. I knew Scott from before I started really taking things seriously. Our relationship went beyond band friends; he was the driving force behind a lot of the things I’ve done – purely on his encouragement and support.’

‘Sing in your own voice’

‘One thing that Scott was always commended for was singing in his own voice. That’s also what he encouraged other people to do: find out who you are and present that as yourself. Don’t write under any false guises.’ This is something that I’ve seen Clark do more and more over the years, especially since the final Three Blind Wolves EP The Bridge. Clark confirms: ‘Definitely. A hundred percent. I remember Scott being a big fan of the song The Bridge. He said: “That’s a really good song.” I think that’s the most genuine time Scott said that about one of my songs. I felt like it wasn’t coming from being a supportive friend, but from a fellow songwriter.’

‘Anytime Scott and I would chat about music, it was always finding that honesty. I think that’s what I meant… when I said there wasn’t one piece of music of time that influenced me. It was Scott’s encouragement to be as honest as possible. Over the years I got better at doing that. If there’s one trade that I took from Scott Hutchison it’s that brutal honesty in writing lyrics.’

Listen to the record
Visit maketinychanges.co.uk