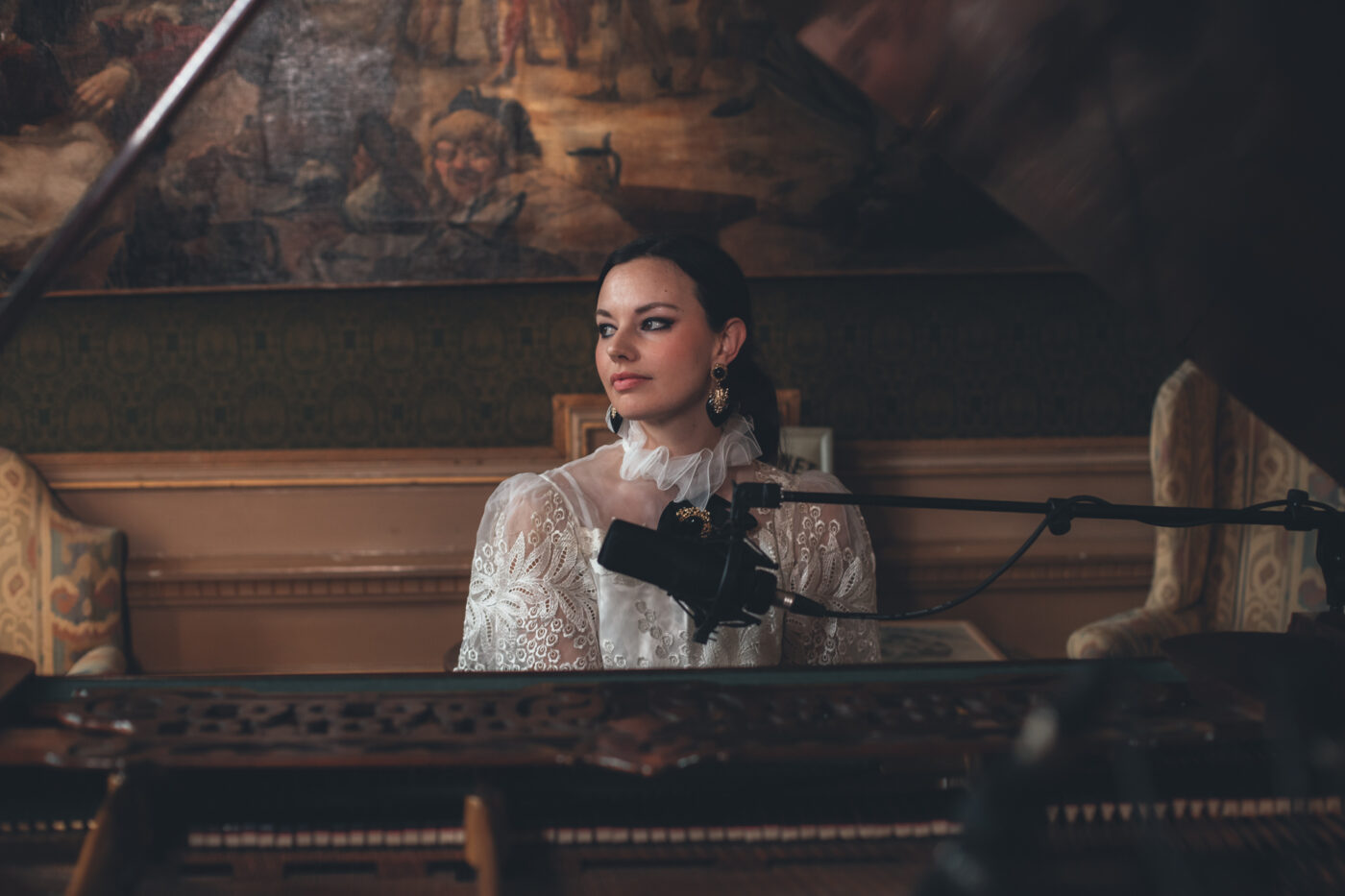 The story of this session goes back more than three years ago. Sam & Julia recorded a session and for this we could use the MI5 studios in Hoorn. The only thing the owners asked in return? That I would film something with an artist they worked with. To be honest, I had half a mind to look for another location, because I only film musicians that I really like. But then I listened to a few songs and soon found out that that includes Elsa Birgitta Bekman. One pandemic later, we met in the small museum Het Kattenkabinet in Amsterdam, where she recorded covers of Kate Bush and Edith Piaf together with violinist Jade Welling and singer Merel Commandeur. You can find those covers and her own song below, as well as an interview about her roots and her craving for nostalgia.

In my mind Elsa Birgitta Bekman was a Swedish singer. Turns out she is Dutch, but has roots in Sweden and France. ‘I grew up with those three countries. All my life I have been going to one of those two countries. Still do. My ninety-year-old grandfather lives in the Alps with his wife, and my mother has had a house in Sweden for a number of years. We also used to have a family home there for a long time. We always celebrated Christmas in the Alps, in that idyllic atmosphere with snow, a huge Christmas tree and good food.’

“I noticed in school that I’m different.”

Well, no wonder that Bekman’s music brings with it a kind of magical and fairytale vibe. Just listen to her debut album Once In My Life from 2020. Growing up with three countries probably has an effect on one’s identity. ‘At school I noticed how differently we lived at home. In any case, we lived very remotely, far outside the village, in a wooden house and on a road with just eight houses. My mother had decorated the house very Swedish and my father cooked a lot from the French kitchen. No cable TV, so we were always outside. We also adopted many Swedish traditions and celebrated Midsommar and Sankta Lucia. There was little Dutch culture in our home. As a result, I know few Dutch sayings. And Dutch music was certainly not played. So that’s why you quickly notice in school that you’re different.’

“Friends may never fully understand that. And that’s why I like that I have a brother, because we’ve all been through that together. It has become such a big part of my identity. That’s why it’s reflected in my music. I’m no stranger to nostalgia. My family lived in paradisiacal places. My grandfather’s house, for example, is just one of the most beautiful houses in that whole village.’

The house where Bekman grew up now also feels nostalgic. ‘When my parents divorced, we had to sell that house in Wijdenes. You can have something so beautiful in your life, but then also lose it all. That’s when I started to develop a strong sense of nostalgia for that kind of thing. Nostalgia is just something very idyllic, but also actually something elusive. Yes, that is really deeply rooted in me now. It’s just what comes out.’

‘On an emotional level I can be pessimistic, but rationally I am more of a realist or sometimes optimist. Through setbacks, I have learned to be more agile. Once In My Life also contains songs from years ago, so I thought this might be a good time and a fitting way to close that chapter of my life. A look back. On the next album I want to do that a little less. Also I’ve noticed that you’ll always take that past with you.’

“A sound that’s even closer to my core.”

Bekman is busy working on new music. What’s new is that she plays more instruments herself during the writing process. ‘Now I have the freedom to fill in all the compositions and arrangements myself. That creates a sound that’s even closer to my core. I notice that many of the songs are about new beginnings. Not consciously, because the lyrics are often just what comes to mind. Maybe the fact that I’m in a longer relationship for the first time makes my lyrics less about heartbreak and more about the world, social issues, and things like depression. How people my age struggle with finding their place in the world. We have so many choices and so much freedom that you start to wonder, “Why don’t I use all of that?” My generation grew up with the idea that you have the right to be happy every day. That setbacks are unfair. I may have a bit too much of that myself. I don’t have all the answers either, but I like to think about it and use writing to philosophize about it.’

Well, I for one am looking forward to hearing the results of all that work. Until then, we’ll have this session to watch.