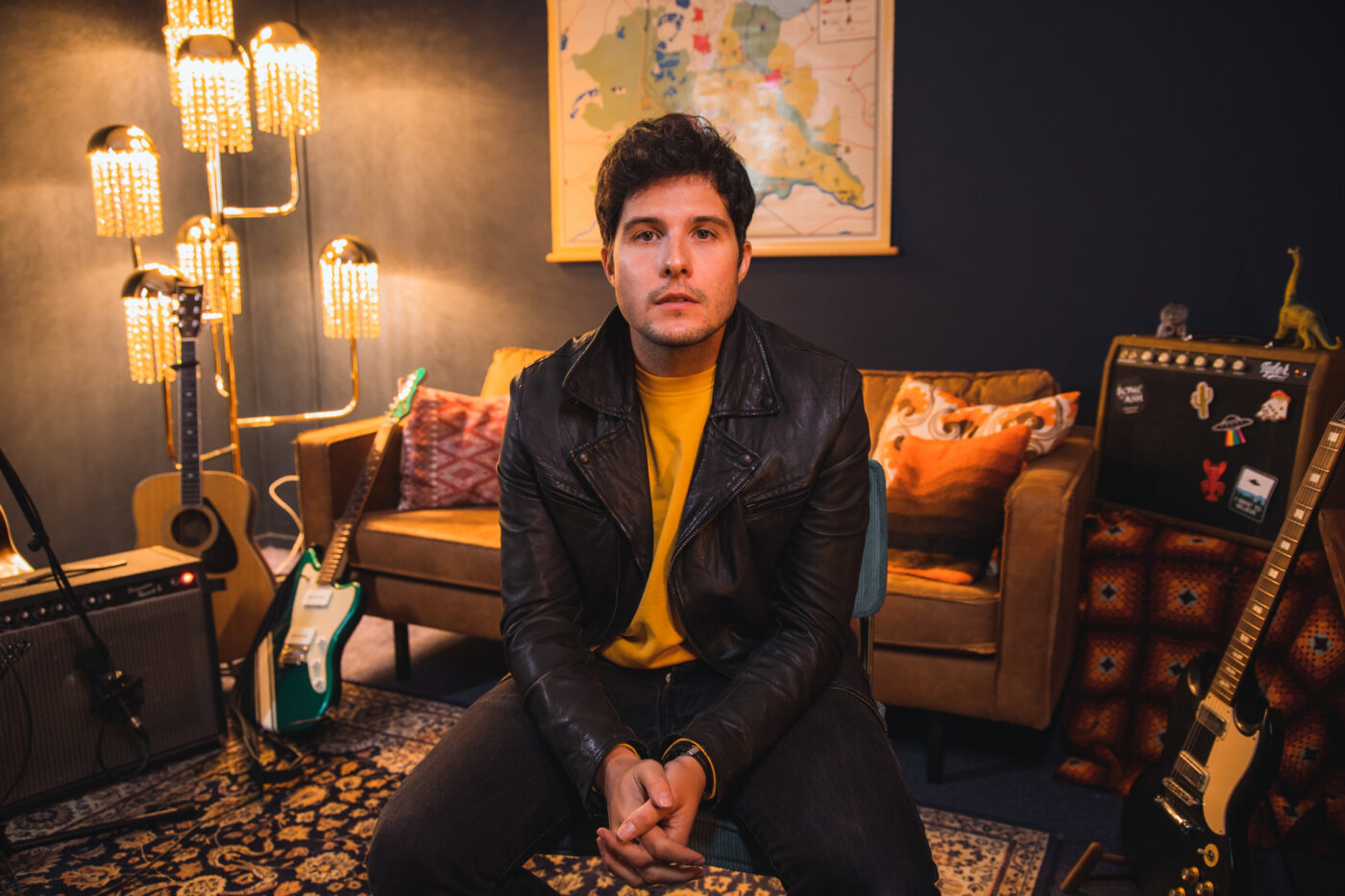 Imagine Brian Dunne as a little kid, sitting in front of the television, watching Bruce Springsteen playing his heart out. That moment sparked the fire in Dunne, from then onwards nothing else but music would do. Here we are, however many years later, and Dunne has become a gifted songwriter and a performer who encapsulates some of the same live energy Springsteen’s known for. In the end, this year hasn’t been too bad for Dunne, who released the first songs with his new band Fantastic Cat (with Anthony D’Amato amongst others), signed a record deal on Dutch superstar Danny Vera’s new label and performed on a bunch of big Dutch radio and television shows.

In the middle of all that, Dunne stopped by Judy Blank’s studio near my house, and recorded this session, playing his hit single New Tattoo and covers of Sheryl Crow and Warren Zevon. Watch the videos and read the interview below.

Growing up near New York City

‘You know, it’s kind of a weird place because it’s like slightly overpopulated and yet it has like a small town mentality. Culturally, it’s far away from New York, you know, there are people there that have never been to New York City, even though we lived an hour away. But yeah, it’s kind of a confusing place because you’re in the fallout of one of the biggest city in the world, right? So, it’s almost like there are seismic waves that do get to you from that action and energy, but they’ve died down and you’re only getting the little drip. There’s a certain wanting from the music that comes out of the surrounding areas of New York City. A desire to join the party. Probably. If you drew a 60 mile circle around New York City, I think you’d find that a lot of the music has similar themes.’

‘I was really young and I was very bored a lot of the time. I have a brother, but he’s a lot older than me and he moved out of the house when I was a kid. So, I just had a lot of time to myself. When I saw a video of Bruce Springsteen playing Rosalita (Come Out Tonight) at the Arizona Veterans Memorial Coliseum in Phoenix in 1978 I never looked back, you know. And I kind of never thought I was going to do anything else. I knew right from the first moment: “This is for me and I’m doing this.” And I think that that stayed with me this whole time. As difficult as the music industry can be, I still feel like if I can just do this, I’m lucky.’

‘It’s this great video, he’s very young, younger than I am now, and he keeps being attacked by the crowd. Rosalita isn’t one of his more serious songs or anything, it wasn’t like it struck me on a deep level I don’t think at that time. I was just a kid. I couldn’t believe that it was somebody’s job. And I think we gravitate towards people who look like us, and are from the types of places that we’re from. So I recognized him. Do you know what I mean? I saw him. He kind of looked like people I had seen from the East Coast. He had curly hair. And I just I saw it and I was able to put one and one together and be like: “This is somebodies job, and it seems a lot more fun than what my parents do.” And I just sort of pulled that thread. There was something so fundamentally familiar to me about that music. It felt like I’d known it all my life when I when I heard it for the first time.’

Dunne’s latest record Selling Things was produced by Andrew Sarlo, who has worked on many wonderful records, for instance by Big Thief, Buck Meek and Courtney Marie Andrews’ Old Flowers. Turns out, Dunne and Sarlo go way back. ‘Andrew’s a really good friend of mine, and I’ve know’n him since we were nineteen and we just started working together naturally. He even played bass in my band for a little bit. Andrew’s brilliant. He worked in different capacities on my last three records. It was really lovely having him take the reins, because he’s become… he’s always been a great producer, but he’s also got great energy in the studio. Everybody is in a good mood when he’s running the show. He puts everybody at ease and he makes everybody feel comfortable and vulnerable, to deliver the performances that they need to deliver.’

‘And it’s funny because when I first met him, the greatest thing about him was that he had really hard opinions about what made good music. And now I think his strongest asset is his ability to let people be vulnerable. You know, so I’ve watched him sort of grow and change over the years.’

That feeling might just be mutual, I mention to Dunne, who’s grown into his art over the years and opened up to be vulnerable on Selling Things more than any of his earlier work. ‘I like to think so’, he responds. ‘Yeah, I think I’ve been more vulnerable. Early on when I was writing, I really wanted to write these sort of broad songs, like something like This Land Is Your Land. Not actually, but I thought the mark of a good song was that it could have been written at any time by anyone. And I’ve sort of shifted my perspective there, where I actually think the mark of a good song is that it feels specific to you in your experience, so that people that share your worldview feel seen and heard, you know?’

‘I don’t like to dismiss my earlier work, and I try to remind myself that at one time it did feel personal. I just wasn’t fully developed as a person. A notable sort of side effect of being young, you know, is that you don’t know who you are yet. So you just assume you should take on somebody else’s personality. You have all this raw talent, but you don’t know how to where to direct it. And it’s true. At 22, my personal story wasn’t particularly interesting yet, I was a young person who had moved to the city, and that was basically the only thing I had done so far. Relationships were young and fleeting. And of course, you can always find something interesting to say about it. And I don’t think a song has to be about any sort of particular trauma. Now, I think you can write an interesting song about a cup of coffee, you know, or a glass of wine or whatever. But it took me a long time to figure out who I was, and I’m very impressed with other writers that seem to come out of the gate and know exactly who they are right off the bat.’

‘You know, that’s sort of the thing I find astounding about somebody like Phoebe Bridgers, who at 23 came out with an album and had a fully formed sense of who she was as an artist. At 23, I was still very much searching for that. I mean, honestly, everything that she’s done has been really fabulous because she’s created an interesting thing where, I mean, she’s a great songwriter. I do believe that she could write a song about anything, and it would be good because she’s just a very skilled songwriter. But there’s also this thing she’s built where she seems fundamentally interesting. And I think that’s captivating, right? As a writer to be fundamentally interesting, you the writer, then it kind of liberates you to just talk about what’s going on with you.’

For better or for worse

‘Ultimately, I think what led to that shift was I could feel that I was being misunderstood by the people that were coming to see my music, you know? I felt like if someone were to come see a show of mine around 2014 and then hang out with me after, they would meet an entirely different person than they were expecting. And I wanted to change that. I wanted to make sure that if you were listening to my songs, you knew me. Yeah, I think that’s that, I think that we captured that on Selling Things. For better or for worse.’

One aspect of being more vulnerable in his songwriting, has led Brian Dunne to open up about his OCD. Writing about it wasn’t hard though, he explains. ‘It actually felt very good, once I accepted that it was something that could potentially be interesting. Everything that happens to you is interesting, but you have to decide if it’s interesting to other people. Once I decided that it could be interesting, I dove into the sort of mania and the paranoia that comes with. There was plenty to be said about. So yeah, I didn’t find it particularly difficult to write about, I actually found it to be pretty easy. The difficult part was knowing when to stop.’

‘Warren Zevon has been a pretty huge influence on me my whole life. I started with his very last album called The Wind. And actually in Fantastic Cat, we cover a song of that album. The Wind came out in 2003 when I was 14, and there was a big documentary on him. And I remember Dave Letterman had him on for the entire show as the only guest. And so that was the inception of my interest in him and going back through his work, he has sort of famously crept under the surface. He was your favorite songwriters’ favorite songwriter, that kind of thing. And I just knew his sensibility was similar to mine. He seemed to have some of the same neurotic tendencies I felt. Still, to this day, I think that like some of those songs like Desperados Under the Eaves speak directly to me, you know?’

‘Carmelita is just a great song. And I thought that it was just kind of a comical sensibility to write such a sweet and whimsical song about heroin. Some songs you hear and you’re like: “Okay, I would’ve written that.” And then other songs you hear and you’re like: “I never would’ve thought of that.” I actually never really play covers, but when I do, it’s usually one of these two songs that I played on this session.’

‘I just love Sheryl Crow and I think she’s getting her due now. But for a long time, it felt like she was criminally underrated and lumped in with like a bunch of nineties rock, even though she was way, way more influential. Tuesday Night Music Club came out, I think when I was five or something. So, it was just part of the backdrop of being alive at that time. But I think to those of us who picked up a guitar and wrote songs, that record had a profound impact. And the one after, the self-titled record, which she produced. Those were such a part of the American cultural zeitgeist at that time. If you were interested in song based music. It’s stood the test of time and 25 years later or whatever it is, it holds up. And I think that’s probably why people cite her as a well-respected influence. And I think it’s deserved.’