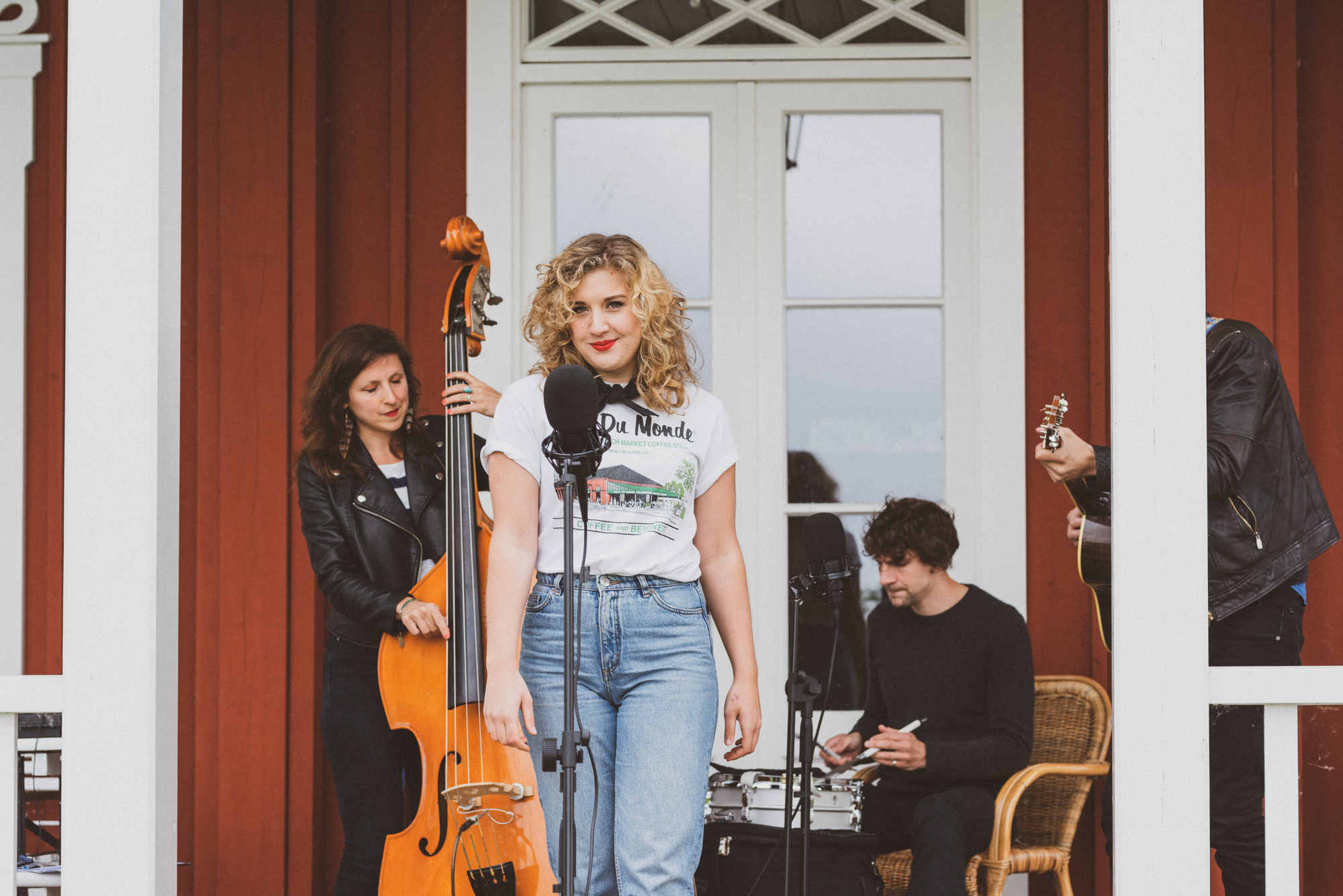 ‘There’s this incredible house with a porch in the town I grew up in. I want to film the session there! I don’t know who lives there though.’ Dutch singer Judy Blank seems pretty excited in these texts messages that are followed by photos and Google Earth screenshots. Skip to ten minutes later, another message: ‘I found the phone number and called the owners of the house, we are welcome to film there!’ This level of happiness and excitement didn’t disappear while filming and editing this session, for which Blank and her band played covers of The Wood Brothers and Randy Newman, and her hit single Mary Jane.

Mary Jane was the first song off Judy Blank’s upcoming second record Morning Sun, set for release on Munich Records this Friday, September 7th. It has been an interesting few years for the Dutch folk and country singer, since her debut in 2014. A lot, if not everything, has changed for her, and a lot of the change seems to have to do with her visits to Nashville and her love for the American band The Wood Brothers.

What would Oliver do?

If you mention The Wood Brothers, Judy Blank starts to shine. And talk. You don’t even have to finish the whole band name. The Wood… will do. ‘As a songwriter, Oliver Wood is my biggest role model. Whenever I’ve written a new song, I ask myself: “Would Oliver think this is cool?” If not, it’s not yet good enough. I once opened for The Wood Brothers and we became friends. I had been a fan of them for a long time prior. The way they make music; that pure and without sacrificing any creativity. They don’t try to be cooler than they actually are, which is pretty damn cool by the way. They inspired me and taught me that Americana can very well be incredibly tight, cool and groovy. I love it!’

‘My favourite record is The Muse, because all of my favourite songs are on it, like its title track. Its melodies and the lyrics; Oliver is an expert in visually expressing things. The River Takes The Town for instance on their latest record. It spoke to me even more because I grew up on the banks of a river.’ We filmed this session at a house in Aalst on that same river – the Afgedamde Maas that connects two bigger Dutch rivers the Maas and the Waal. ‘I was born during a flood, so I was amazed when I first heard this song. Of course, Oliver didn’t write about this river and that particular flood, but still in my head I see our river when I hear their song. That’s what Oliver can do.’

The River Takes The Town (The Wood Brothers)

‘I’ve become rather critical of my own lyrics. When people can find their own stories in one of my songs, that’s the best feeling I can get. It’s a beautiful aspect of music: a song can mean something different to a lot of people. I want to write about my own experiences and feelings, but word them in a way that it speaks to others too. To tell a story, without thinking about what’s trendy or hip.’

There’s an undeniable contrast between the Judy Blank now and the one that released the debut record When The Storm Hits – filled with mostly “jazzy” piano songs – in 2014. ‘These songs on Morning Sun are less far-fetched and more me. I was thinking way too much about what other people might want to hear. I was still attending the conservatory, where teachers told me that a C, F, C progression was extremely boring. So, I ended up searching for the difficult and it didn’t work. Suddenly I got labelled as a jazz-artist, even though I knew nothing about the genre. I even declined an interview with a jazz magazine, because they wanted to ask me about my jazz heroes. Well, I don’t really have any!’ she confesses with a smile.

Tired, disappointed and a little disillusioned by her early experiences in music, Blank started to get doubts about pretty much everything. ‘Maybe this wasn’t for me after all. I had put so much effort into that record and nothing happened, while I saw others around me doing all the things I had wanted.’ In 2015, Blank went to the USA for two months and taught music at a primary school. It turned out to be her gateway to folk and Americana. ‘Those kids sang these old folk songs – passed down for generations – and really felt it. They were so into it, they sang with their eyes closed, and it blew my mind. They will never think it’s “boring”. It pretty much changed everything for me. That was the way I wanted to write songs from then on. All that matters, is that I feel it and mean it. I never want to write another song that I didn’t feel or experience. On that first record I did what I thought was right at the time. Ah well. I feel like I keep learning and developing more every year. I’ve gotten to know who I am. Now I feel that all I have to be is myself. Either something moves me, or it doesn’t.’

In the States, Blank discovered more Americana music. ‘I listened to The Wood Brothers, a lot, as well as Ben Howard and Michael Kiwanuka. Real craftsmen. I now think that’s when I really started to love the profession of song writing. I realized I need to write about personal things. It’s difficult sometimes, because I’m an introvert and with these songs everything just comes out for people to hear. I’m way more vulnerable now. But within that vulnerability I’ve found a new strength as well, because now if people don’t like it, it doesn’t bother me as much. It is what it is.’ She didn’t write Morning Sun with the goal of reaching the biggest possible audience. Which makes the success of the first single Mary Jane such a pleasant surprise for Blank. It got a lot of plays on both Dutch and international radio, and she got some good shows, like opening up for Beth Hart and Heather Nova. ‘I didn’t really have a lot of expectations, all I wanted was to have a record that I’m extremely proud of. A record I believe in and that I can actually bear listening to.’

Morning Sun is a coming of age record for Blank, both personally and musically. ‘It’s about learning how to live, which I find to be an ongoing process. Right now, my favourite song on it is Unbroken, about losing someone. I watched the movie The Broken Circle Breakdown and couldn’t stop thinking about the end of things. How definite it is. When we walk out of this place, we can always come back tomorrow and continue. Or next week, next year even. Because this espresso bar will still be here. But when someone dies, suddenly there’s a never. The realization you’ll never see someone ever again, that he or she just seizes to exist I still find bizarre. We live on, we have to, but we’ll never be fully whole again.’

Speaking with Blank is a refreshing experience. It’s inspiring to talk to someone who is so open and openly asking questions about life. Who’s still truly surprised by what music can achieve and what her own music can mean for others. ‘Even now, I have to pinch myself every time I see Oliver Wood: “Act normal Judy, act normal.” It’s really special to know and help each other. I helped them get a tour manager in Europe and Oliver helped me by showing me the Southern Ground Studio in Nashville, where his wife works, and I ended up recording Morning Sun. When I see The Wood Brothers play, I know: this is it. They’ll never pull stunts to get more attention. They’ve practiced and worked so hard for so long to get their craftsmanship to the highest level. No concessions. Seeing them makes it easier for me to not care about things, like my appearance. Fuck that shit, I’m doing what I want. Don’t like it? Well, that’s your problem buddy.’

One of my favourite young Dutch photographers is Ilse Wolf, who happens to be a niece of Judy Blank. It was a privilege to have her present and take photos. All of the photos above are Ilse’s. Visit her website for more good stuff.