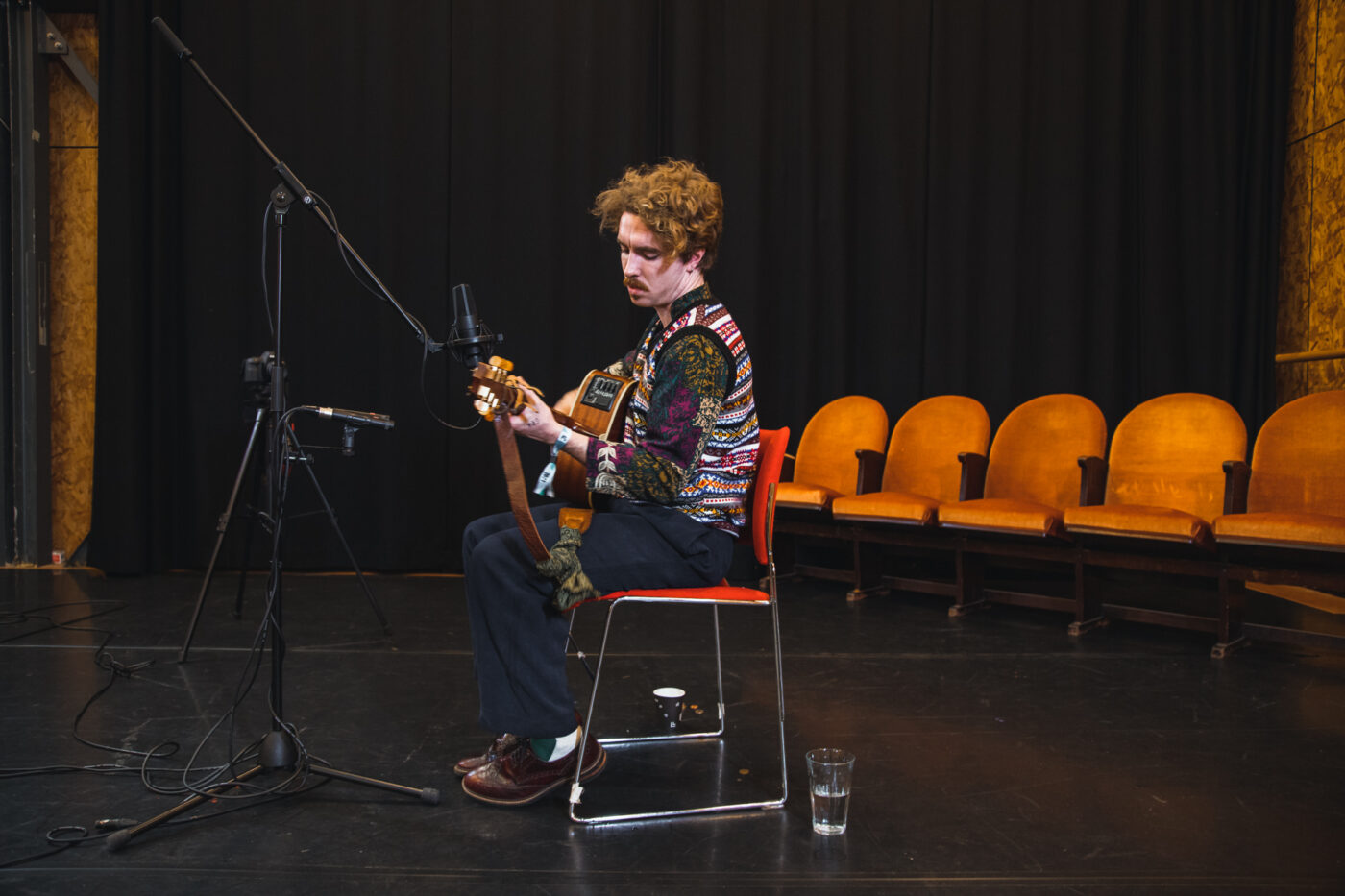 In August 2019, I stayed a few days with my friend Davie Lawson and his lovely family in Ireland. Upon arrival, his eldest son called me into his room to play me his favorite song of the moment, singing along to every word. The song? Evidence of Living by David Keenan, from the EP with the same name. Later that week, Davie, his son, my wife, and I attended an outdoor set by Keenan during the Kilkenny Arts Festival. It was special to discover a new musician through the eyes and ears of a 4-year-old. Later that night, Davie and I saw Keenan perform with a full band at the Set Theater and it was electrifying.

Fast forward to Groningen, The Netherlands, November 2021. We’re in the upstairs room of the Grand Theatre and David Keenan, who’s performing at the Take Root festival, and I meet again, to film this session for The Influences. Keenan released his new LP What Then, and recently moved back to Ireland after living in Barcelona for over a year. ‘I was the whitest boy in Catalonia’, Keenan tells me afterwards.

Right after playing Spraypaint Backalley by Damien Dempsey, Keenan said it felt like he was fifteen again. ‘When I was thirteen, I was given Shots by Damien Dempsey by my uncle. I just ran away from home and the police brought me back. I was an angry young man, and I was going through a difficult period of my life, causing grief for my family as well. My uncle on my father’s side had a new stereo system. He put a chair in front of the speakers and said: “You sit there. And you’re going to listen to this guy singing about what you’re fucking going through. You’re going to listen.” He put on an album by Damien Dempsey and that song was on it, and it changed a lot for me. Because he was singing about things that I was going through and doing, in his own accent, and I heard nothing like that before.”

“So, you know. I was thinking about what songs to play coming here, and it’s very difficult, because for me to interpret a song I have to really really really understand it and feel like I could give something to it, rather than take something away.”

“I listened to Damien Dempsey for years and he was probably my biggest influence growing up. Then I ended up touring with him! The first tour I was ever on was an Irish tour with him. He brought me on tour, and he put me up at his house for a few nights. He took care of me. He’s an amazing human being, in his humility and what he gives with his music. There’s a film that’s just been released about him called Love Yourself Today, and it’s about the intentions behind his songs and how his music has helped people. I had not played Spraypaint Backalley before, so it felt a bit dangerous and exciting.’

‘Channel your fears into something positive.’

Keenan found a lot of recognition in Dempsey’s writing. ‘The honesty and trying to overcome the shadow, trying to motivate yourself, battling those demons and that darkness. I mean, in that song he’s talking about drinking cheap English cider and smoking hashish. As a teenager, that was it. And this need to prove yourself to be a man, you know. “I have a fifteen-year-old mustache, if I shave it, I’m a boy again.” You know what it’s like trying to grow some facial hair for the first time. He says: “My father and brother are fixing old cars.” My father and my brother were more alike, my father had cars, and I wasn’t really interested. But I wanted to be. So, I just recognized the person in that song, it was as if he was singing about me. And then he quotes Oscar Wilde in the end: “We’re all in the gutter, but some of us are looking at the stars.” It’s so beautiful, you know.’

David Keenan mentions recognizing those demons himself a few times in the first few minutes of our conversation. So, I ask him what those meant and mean to him and how he coped with them over the years. ‘Music. Again, music. Trying to channel it into music. It was around that time that I seriously started writing as well. I discovered Damien Dempsey and another Irish artist called Jinx Lennon, and he was from my hometown Dundalk. The two of those guys really lifted me up and got my attention. I heard them and though: “If they can do it, I can do it. I have something, I’ve got all this penned up inside me, and I can do something with this.” There was no choice. It was like a madness in me. I had to process what it was like to be alive. The way I do that is in a song. So, yes, around thirteen years old. Before then I’d written silly little songs, but around that age I started to get serious about being honest.’

‘It’s always been scary. It’s scary now!’ Keenan laughs aloud, saying this. ‘I life, you can have fears about everything. But it’s how you channel that into something positive. That’s alchemy. Rather than letting your pain consume you and drive you into the darkness, you can channel it into light by facing it. Damien Dempsey is someone who’s a purveyor of that.’ Our conversation reminds me of the Hiss Golden Messenger lyric in Tell Her I’m Just Dancing: “You can’t choose your blues, but you might as well own them. For a little while.” And I can of course relate to what Keenan says about not letting your pain consume you and channeling it into something positive, as that is how this website started and developed. For some years, this website was all I could manage to do, while suffering heavy, continuous, debilitating pain from a neck injury. ‘That’s a perfect example; you are taking that trauma and turning it into creativity.’

Keenan grew up in Dundalk, a city of a little over thirty thousand residents, about an hour North of Dublin, right on the border to North Ireland. ‘There was a sense of not belonging. The town is literally on the border, so there’s a culture that’s built up, trying to find a belonging, to stay on the beam. There was a lot of anger and suspicion and obviously The Troubles spilt into the south, a lot of behaviors and mannerisms, these elements of secrecy. It’s all repression and it spilt into Dundalk. So, when I was growing up, I spent a lot of time at my grandfather’s estate and then I lived in the countryside. I didn’t belong anywhere and felt like I was in between: on the border and trying to stay on the beam – in the middle of chaos and calm. As a young man, I didn’t know what to do with all these emotions, so people watching and trying to put into songs the mannerisms of people from my hometown, the atmosphere, the beauty and also the fact that it was rundown, and then the countryside.’

‘When I’d leave the town and be out in nature on my own, I’d have all this time to process, because I was a loner. Going on long walks on my own was important. Just trying to deal with frustration and anger and pain and confusion. I don’t know what would’ve happened if I didn’t have the ability to express myself in music.’ The first time he experienced using that in his writing and it being helpful, was powerful, Keenan tells me. ‘There was somebody in my life at the time that was a bully. One of the first songs that I wrote was expressing that kind of anger and afterwards I felt: “This is empowering.” I felt charged by this thing. Then you tap into parts of your psyche that you didn’t know that were there. So, it’s a real consciousness expanding experience: songwriting, music, frequency, energy, rhythm. Everything is rhythm. When I’m writing down a lyric, it’s lyric. Energy, it’s all energy. It’s such a giving thing. Like I said, nothing has ever changed that much; if I didn’t have this, then I would probably explode.’