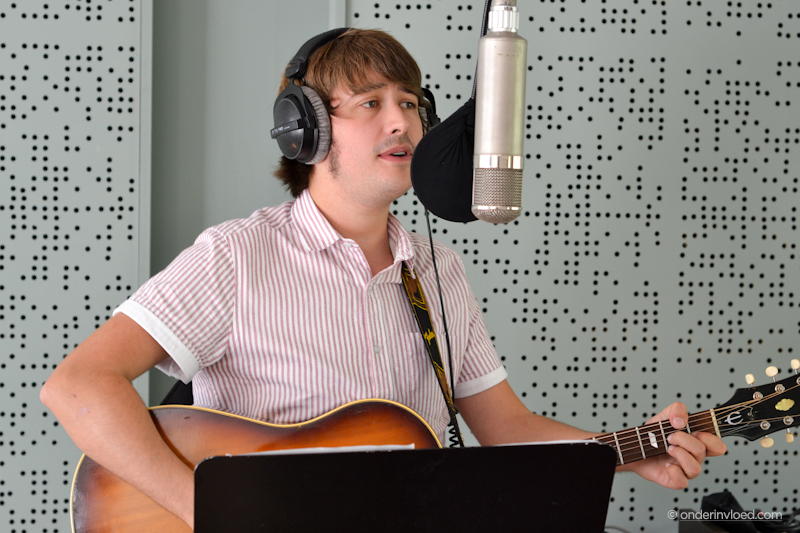 Yorick van Norden is the kind of guy who can tell you in which key McCartney played a certain song during a certain show decades ago, or who was the bass player on a special recording by one of his favourite bands from the sixties or seventies. With his band The Hype, he payed tribute to those influences, but on his solo debut Happy Hunting Ground he found his own way. His own sound, build steadily on the shoulders of his heroes.

This session was recorded at the SSE Noord studio in Amsterdam.

I suppose a lot, if not all, musicians start off learning the songs of their influences, before writing their own songs and steadily finding something that becomes ‘their sound’. As did Yorick van Norden, who already wrote his own songs for his former band The Hype.

The Hype once performed at an Onder Invloed event in Amsterdam, almost six years ago, and kept playing twice as long as they had to. They and the audience were having too much fun to stop. The tapes containing the footage of that show have to be in a box somewhere in the Onder Invloed office. I believe something went wrong with recording the audio, because otherwise it would’ve been posted online very quickly after that night. I liked The Hype very much, because their songs were good and the fun they had playing was contagious. Their songs, although very good, were very much a reflection of their influences; The Beatles, The Beach Boys, The Monkees, The Kinks, The Who, et cetera.

A week and a half ago, Van Norden’s first solo record – although recorded with a band – was released on the Dutch independent record label Excelsior Recordings. That label is a perfect fit for his music, and the album he’s recorded with renowned producer Frans Hagenaars is as good a debut as any. It’s like he stepped over a threshold of influences, found his own style and has also improved a lot vocally. Sure, you can still hear who he’s listened to, but he managed to create something that is very good in its own right. Some of my favourite songs on the record are Divide And Rule, Gamblin’ Mama and I Fly A Kite. As long as he keeps writing these songs, Van Norden no longer needs McCartney, Wilson or Davies.

“David Crosby and Graham Nash recorded a number of beautiful duo records without their well-known associates in the seventies. The first record David Crosby & Graham Nash from 1972 is probably the strongest of the bunch. The poppy style of writing by Nash and Crosby’s dreamier style complemented each other and created a record that never gets boring. The last song of the album is Immigration Man.

“What can I say? The lyrics say it all. It is more than forty years later and the song is as topical as it ever has been. Poignant, isn’t it? I just had to pick this song, to do something. I haven’t got a solution, but music is a great medium to speak out and get your opinion heard. These days not enough musicians show their engagement through their songs.”

“This summer I was invited to sing a couple of songs by the maestro during The Kik’s tribute to Paul McCartney in the Royal Concertgebouw in Amsterdam. It was a huge honour and a dream come true. McCartney is my biggest hero and there aren’t many venues as magical as the Concertgebouw. One of the songs we did was Every Night, from his first solo record McCartney in 1970. A beautiful song about how the final dark days of The Beatles almost got the best of him and how his love for Linda got him through all that. The show with The Kik wasn’t recorded, so this was a good opportunity to record it live in the studio.”

The Door Into Summer

“History hasn’t been kind to The Monkees. They’re often portrayed as a joke, a boy band, The Beatles rip-offs, et cetera. But was the difference between them and their contemporaries really that bug? No, it wasn’t! Just like everyone else in the Los Angeles scene, they were eager to use the phenomenal Wrecking Crew; the session musicians that played on records of Phil Spector, The Beach Boys, The Mama’s & The Papa’s, Glen Campbell and even The Doors. Just like all of them, they recorded the vocals themselves and did that beautifully. Michael Nesmith was an exceptional songwriter, who after The Monkees formed The First National Band and was a pioneer in country rock.

“In contrary of what people sometimes say, The Monkees themselves could play just fine. On the record ‘Headquarters’ they’ve played all the instruments. The magnum opus of The Monkees, as far as I’m concerned, is Pisces, Aquarius, Capricorn & Jones Ltd. from 1967, which features The Door Into Summer. Bill Martin who also wrote Rainmaker, which was made famous by Harry Nilsson, wrote this beautiful song. My favourite Monkee, Michael Nesmith, sang it. The lyrics are beautiful, the melody’s strong and it has a nice arrangement. It’s just a fantastic song.”

The Door Into Summer (The Monkees)

The Door Into Summer (The Monkees)
YouTube | iTunes | Spotify