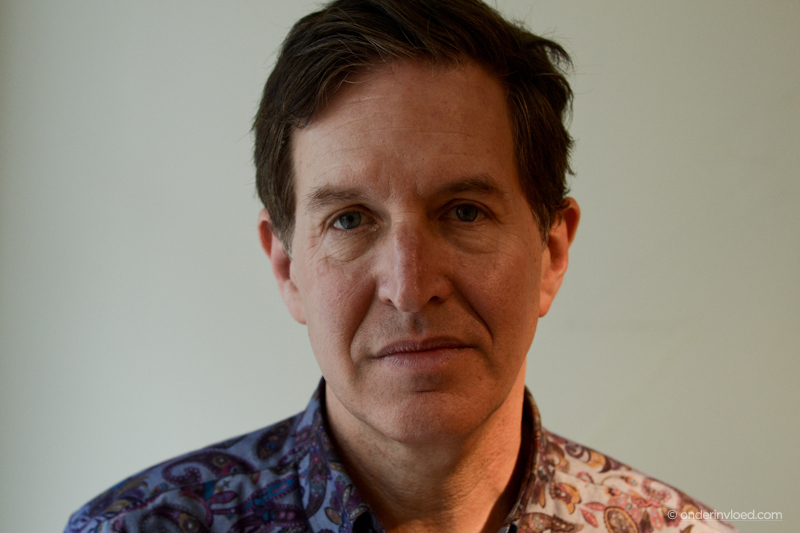 This session was set up rather last minute, and early on a weekend morning, but nonetheless very nice to film. Steve Wynn didn’t really seem to mind the early hours, and played three classics as if he’d played them everyday for years. Three years ago he reformed his band The Dream Syndicate after breaking the band up in 1989 to be a solo musician. These days, he does both and more.

Read the interview with Steve Wynn below the videos.

Don’t Bother Me (The Beatles)
Written by George Harrison

It was nice to film at Swordfish & Friend, a store in the city centre of Utrecht that sells LP’s – carefully selected by Onder Invloed’s good friend DJ St. Paul, art, Crosley record players (the store owners import them) and, yes, my book.

As quite a lot of bands over the last few years, I started listening to Wynn and his back catalogue when I was going through booking agency Belmont Bookings’ impressive roster. There’s a lot to discover: whether you look into The Dream Syndicate’s releases, his solo records or his work with The Baseball Project or any of his other projects. If you haven’t yet, I suggest you just dive in.

Why did you choose these songs to cover?

“Coney Island Baby and Stage Fright were easy choices. I started playing Stage Fright thirty years ago. When I first started playing solo shows I played that song, because I thought, besides it being a really good song, I had a different arrangement than the original. I played with a band for years, but I’d never played a solo show until I was twenty-five. For a long time I was very nervous to be on stage by myself, that song tells the story of the way I felt on stage.”

Do you experience stage fright, still?

“I don’t so much anymore. But originally it was very hard for me to perform solo. It took a lot of drinking to get the courage. But now it’s much easier. I became really good at being the solo acoustic folk singer; it became very natural. Because I’m now touring solo electric for the first time, although it’s good to try something new, I brought that song back because I was feeling some of those same nervous from back then.”

Was it necessary for you to change things around a bit? What did it bring you?

“Definitely. I had to rethink the songs and the way I play them. But it also came rather natural, because this is closer to what I do with my band. It’s almost like playing with a band without the band there. In my mind these shows have the excitement, adrenaline and dynamic of a rock show. I like that. If anything it turned out to be closer to what I’m used to doing.”

It took seeing other musicians playing solo and electric for you to realize that might be a good idea for you too, right?

“It did. I was looking for what to do next and I had a period in New York when I was going to a lot of shows. Within a month I saw three people playing solo electric shows, Grant Hart, Bob Mould and Elvis Costello. They all seemed like a different way of being a solo artist, and I got inspired. I really like it, it’s great.”

Are you going to be touring and recording as a solo artist for the coming years, or will it be The Dream Syndicate again?

“I never know. I’m taking it one step at a time. This is what I’m doing right now and it’s a lot of fun. It’s good to try new things and to be surprised. When this tour ends, I’m going on a tour with my solo band and work with my other project, The Baseball Project (with Peter Buck, Mike Mills, Scott McCaughey and Linda Pitmon). The good thing about these days is that you can do a lot of different projects. In older times you were supposed to do one thing and do it until it worked or not. Now, you can have four or five things and do whatever makes sense.

“I remember in 1988 when I was doing solo shows and The Dream Syndicate at the same time and the manager said: ‘you have to choose, you can’t do both at the same time”. I was young and didn’t know. That’s why I broke up The Dream Syndicate, because I felt that if I had to choose, I wanted the freedom to do solo things. I wish I had thought at that time to say: ‘you’re full of shit, you’re wrong’. But I didn’t. Now it’s different.”

How is it being back together as a band for a couple of years now?

“We don’t do a lot of shows, but every now and then we come together and we play really well. It’s really exciting. It was amazing; we managed to pick it up almost where we left it. The first time we played together after twenty years, it just felt like it had been yesterday. I gave the band three days of rehearsals before the show, but we were done after the first rehearsal. It was crazy. We’re going to record in the summer and see what happens. If it feels right, I’ll put it out. I think the band is good and it’s different enough; it won’t just be nostalgia. We’re not doing it for the money. If I’m doing it for the money, than I’m doing a bad job”, Wynn concludes smiling.

Do you know instantly when writing a song for which project it’ll be?

“I do. These days I write specifically for certain projects. I still write songs just to write, but I also aspire to write for a project. It’s almost like you’re writing for a movie, play or a novel. ‘What’s the story I’m trying to tell here? Who are my actors?’ I can hear with whom I’ll be playing it. The way I start writing is always different. If it were one thing, I’d do it every five minutes. The biggest inspiration for me is when I’m walking and hearing things. That’s when I do my best writing. Seeing things around me, feeling the rhythm of a city, overhearing conversations. I live in New York City, so there’s always something going on, and I’m always walking. I just moved to a new neighbourhood across the river to Jackson Heights, Queens, which is a very international neighbourhood. So there’s constantly inspiration. All the time.”