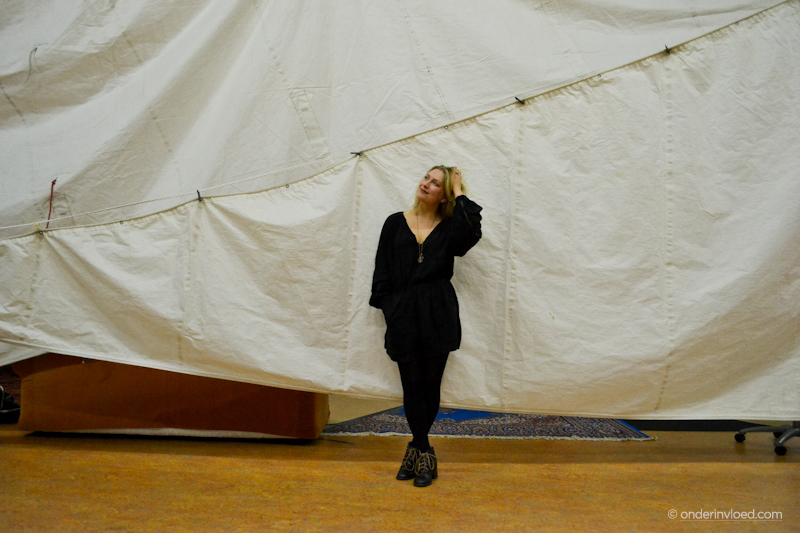 About four or five years ago I was a judge for one of The Netherland’s biggest alternative music competition ‘De Grote Prijs van Nederland’, in the singer songwriter category. One of the musicians that made an immediate impression, I believe on all of the judges, was Yori Swart. She played the guitar better than most, sang with a beautiful voice, wrote good songs and knew how to play them in front of people as well. It was no surprise she ended up as the winner and now, years later, we met up to film this session.

Read an interview with Yori Swart below the videos.

Hand In My Pocket (Alanis Morissette)

It’s no wonder Yori Swart is impressive on guitar, since her father is a talented jazz guitarist and started teaching her at a young age. ‘I grew up listening to Joni Mitchell and a lot of jazz-fusion. David Sanborn too. When I started getting (jazz) singing lessons at thirteen years old, I was already writing my own songs. I had a lot of mix-tapes and most of the pop music I heard on MTV. My mother would listen to Melanie, Norah Jones and Joni Mitchell, which at first I found a bit boring. It wasn’t until later that I started appreciating it and found out I knew all of her songs.’

Swart’s dad took her to a lot of shows by Dutch guitarists like Eric Vaarzon Morel and Harry Sacksioni. ‘A lot of jazz and flamenco shows, mostly at the Bimhuis in Amsterdam. My father played in a jazz band with flute and guitar and would bring me along to their shows. Sometimes I was allowed to play a song during their break. It was nothing like the music I make these days, but I still put that complexity in the way I play guitar. I try to create poetry on my guitar, that’s what I get a kick out of.’

Another woman who inspires Swart is Ani DiFranco. ‘I didn’t want to cover her or Mitchell; because I feel those songs are so close to me. DiFranco is just about the only woman I know who does really weird shit with her guitar. She plays in unusual tunings for instance, but also writes really great lyrics. When I heard her music for the first time when I was fifteen, I dove right into everything she’d done.’

‘When it comes to influences, I usually first look at the first couple of songs I loved, when I was young. But now I also wanted to play something that has influenced me over the last few years. I heard Multi-Love through a friend and it immediately touched me. It’s a cool production and I like how he plays the guitar. It’s a very jazz-orientated man that writes pop music. When someone’s a really good guitarist, it triggers me. It’s not really clear what the lyrics are about so I got curious and wondered why I was so moved by that song.’

Swart read an interview with Unknown Mortal Orchestra’s Ruban Nielson in which he almost explained the lyrics, but changed his mind and didn’t. ‘He wanted to leave it up to his listeners to decide for themselves first. Isn’t that cool? It leaves space to form your own image, like reading a book before watching the movie. When I choose a song to cover, I don’t want to play it like the original, I want to create my own version. For me, Multi-Love is about being able to love multiple persons at the same time and about multiple religions co-existing.’

‘It doesn’t happen that often these days, but sometimes a song can really knock you out. That’s what happened when I heard Multi-Love. There are a couple of other UMO songs I like, but this one stands out. I saw them play live at Paradiso in Amsterdam and was impressed again. Just like Bon Iver, Nielson writes very obscure lyrics, and still that song makes me feel all these emotions. How does he do that?’

‘I like both cryptic and really direct lyrics. I’m not particularly direct in my lyrics, but that’s mostly caused by me hesitating to write down the truth strictly as it is. It’s very difficult to write very direct lyrics, especially if you’re not a native speaker. To tell a story that complete and compelling, with all the right nuances, words and emotions, like Stephen Stills did on 4+20, it’s hard. To quote Spinal Tap: “It’s a thin line between stupid and clever”.’ Swart concludes with a smile.

‘For a long time I had lessons from René van Barneveld (known for Urban Dance Squad) and right when we started focussing on fingerpicking, he taught me 4+20. Ever since I’ve been in awe of the lyrics, the arrangement and the simplicity of that strum. There have been multiple moments in my life when I could really identify with the lyrics. This is a song that I could have written myself, if I would have been able to find the words this well. When I listen to it, it feels like it could be about me.’

During the filming of this session, Swart told me that she was ‘finally’ creating the music that she wants to make, tired of trying to fulfil other people’s wishes and expectations. ‘This new record is much more raw than anything I’ve ever written. The songs are honest, but the productions are still challenging. Some songs are true pieces of art I think, because they’re recorded all over the place and put together. Other songs are live and raw. I’m trying to combine accessibility with more complex guitar parts, lyrics and arrangements.’

‘I think it’s quieter. Hold on, that’s not right, because it gets loud as well. It’s certainly a snapshot of who and where I am now. I’m different than I was before: A lot more mature and bolder. Confident. Even though the record was made with (the help of) a lot of people, I was in control the entire time and involved in every decision that had to be made. I wanted to know what was happening, how it was going to happen and why.’

‘I’m a bit of a nerd when it comes to certain things. I love working on one song for days on end, whether it’s the lyrics or the arrangement. With this record, I had the opportunity to do just that. For one particular song, I worked three days in a row from early morning till late night, writing lyrics. Just because I found something I really wanted to write about.’ Usually a Yori Swart song starts with a certain tuning though. ‘I’d get inspired by playing the guitar in a certain tuning and end up writing a song about that feeling or whatever I’m dealing with at that time. The past year was very much shaped by the prison.’

Swart used to live in an old, closed prison in Alkmaar. Voluntarily, mind you. This session as actually planned to be filmed there, before it ended up being used as a temporary refugee centre, which is without a doubt a much more important matter. ‘I wrote a lot of the songs for the record there, so a lot of them are about freedom. I felt really free in that prison, as contradictory as that may sound. It was like a palace to me, extremely big. I could go for long walks, in my own house. I could play and sing as loud as I wanted. Early on I could still feel some of the old energy. There would be people who rang the doorbell saying they were coming to visit their boyfriend or husband, who’d been moved to other prisons long before then. In the end I felt really sad I couldn’t stay there.’

Last week I published a session by Lori Lieberman, who knows Swart personally and had something to say about her. ‘She’s so good, it pisses me off. She doesn’t even know how good she is. She’s going to really be something, I know it.’