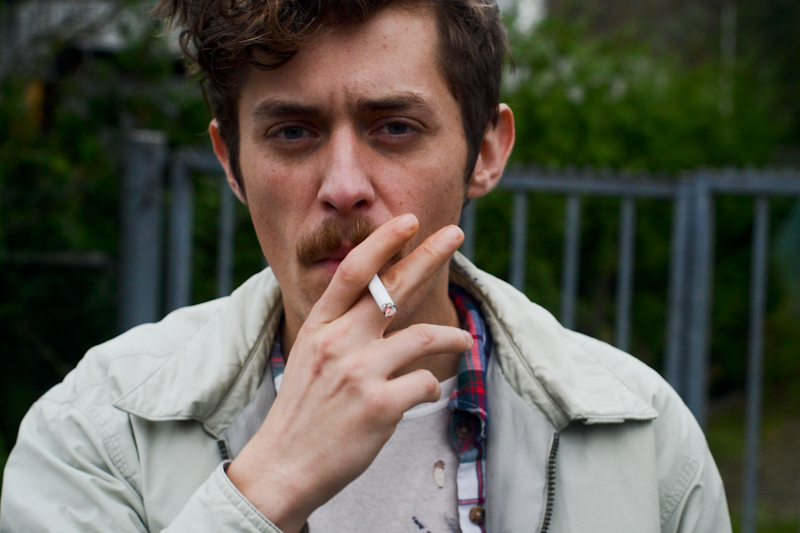 It’s a small crime that nowhere near enough people know Small Houses’ latest LP Still Talk; Second City yet. Nowhere near enough people are enjoying this record by Jeremy Quentin – who recently moved to Austin, Texas. He writes lyrics better than most songwriters I know and has got a voice to sing them as well. If you don’t believe me, ask the Daytrotter people, who’ve recorded multiple sessions with him. We’re just going to keep filming new sessions, until he’s famous. By then, he probably won’t have time for it anymore anyway.

Quentin wrote an essay about The Weakerthans, who’se song Watermark he covered for this latest session. You can read that below the videos of the cover and an unreleased song. Martijn Groeneveld was kind enough to let us use a room in his Mailmen studio in Utrecht.

‘My brother, Michael, is circling a neighboring cut-de-sac along with a dozen inventive explanations he’d give to our parents for why he left the house on a weekday evening. His ideas are dim, bothered by weed, and then interrupted by the best part of whatever song was playing through the cassette deck to an auxiliary Discman sitting in the 91′ preowned Saab’s side seat. All white and with a failing alternator that would leave me stranded an hour from home a few years later. I just need to let it sit for a while, juice up a little, keep me out an hour past a loose midnight curfew along with a fair reason.

He’d leave for college and I would inherit the car when I turned 16, live out every fantasy I had about driving to Detroit or just a few miles up Saginaw into downtown Flint, being that every mistake Michael made would lengthen the tether with mom and dad for what I could get away with. Still, I didn’t want much, just a lease that would leave me at a friend’s house or at a all night restaurant, alone. Anything that could keep me away from home and in plain sight of a patience I only found when I was free of the unwinnable.

At the moment, he was gone and half of his CD collection, kept in a mall-bought scrapbook made for discs and their accompanying booklets, would be left behind in his room, just down the hall from mine. I had already leafed through the entire collection a hundred times, totally void of direction for what I would ‘borrow’ this week. I had already made a good group of guesses on what I would like best, judging every album by their cover, the palest of which would strike me most.

‘Fallow’ is a word owned by farmland, tilled space left unseeded in order to fight shy of a surplus of crop or to regain it’s inherent vitality, that when used in the context of my growing up is effortlessly disheartening. Still, The Weakerthans had a way of making the worst parts of young life feel anthemic. How I could have so much pride and disdain for the same things, a familiarity that builds every part of your person, i.e. my hometown, then tells you it doesn’t want you anymore. And then I’m so proud that that’s the way it is because the sentiment is mutual.’