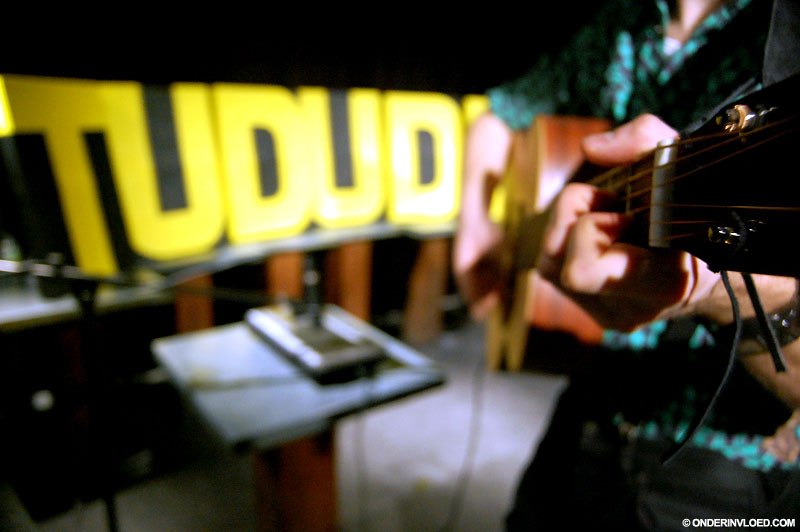 Ronald Straetemans was the reason I almost became an alcoholist during the last year. He kept serving me beers until the sun came up, expecting nothing more than just this session. Straetemans, also known as Tududuh covered Das Pop, The Faint and David Bowie.

Straetemans’s a bar tender at ‘De Bastaard’, a bar in Utrecht, The Netherlands, whenever he isn’t on a stage making music. Currently he lives in Berlin, Germany. Writing songs and organising gigs abroad. Only last week, he released his second EP called TUDUDUH02. Recorded and produced by OnderInvloed.com’s good friend Ro Halfhide, who also did backing vocals and percussion. Most Unpleasant Men’s Jelte Heringa also features on the EP, playing keys. You can download it for free, right here.

We recorded this session in the back room of De Bastaard, of course, with the curtains closed and the floors still wet from the cleaning woman (‘s floorcloth). Straetemans used to be the lead singer of a Dutch band called Glenister, which also Jelte Heringa on keys. As Tududuh, he doesn’t have a backing band yet, which is the main reason for him to use samples from tape, on record as well as on stage.

Both Andy Warhol and David Bowie have been big influences on Straetemans’ life and cultural taste. No wonder he covered the Bowie song called ‘Andy Warhol. The other influences are Das Pop and The Faint.

Audio by Francois Koopmans
Thanks to De Bastaard