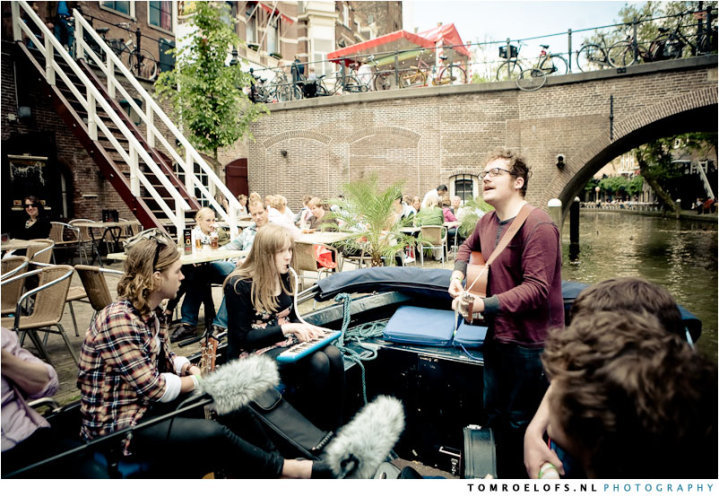 Onder Invloed is celebrating it’s 2,5 years anniversary. One part of the celebrations is this new section in which musicians will give you their Top 5 of best songs. Including a personal story behind the song. There will be a new Top 5 online every day in January. Read the stories, watch the videos and listen to the songs in our Spotify playlist. Episode 5: Ross Clark (Three Blind Wolves).

1. Neil Young – Heart Of Gold
I found it really difficult to pick my favourite Neil Young song, this is mainly because the man is my hero. He is the musical artist that I respect the most, both in his fierce and beautiful guitar playing and his dreamy lyrics. ‘Keeps me searching for a heart of gold, and I’m getting old..’ is one of my all time favourite lyrics, for me, it means hope. Life is not always going to be an easy ride but you have to keep searching and looking for your own happiness. I suppose this song taught me how to be on my own, and to follow my own way of doing things both musically and personally. When I put this song on it transports me to this place where i can be the traveller, the lover, the singer and the man that hopes for love and happiness down the line.

2. The Band – The Weight
The Band mean alot me to as they are a group that have a big influence on the sound I like to have when playing with my own group. There is a distinct closeness in The Bands music, its like, it’s musically tight but loose and relaxed at the same time, they can make me cry and dance in the same vocal line. This is song is definately one of my favourite tracks as it reminds me of when I started playing with the band properly, we all started singing harmonies and looking at songs like little hands pointed out to the listener. This song to me is about friendship, doing your neighbor a good turn to keep the world turning in the right direction. It’s a happy song about how people can be such fantastic creatures and if we all hold hands and sing along we can escape all the bullshit that goes on around us and be somewhere else.

3. Mercury Rev – Opus 40
My dad got me into Mercury Rev when I was about 15 or 16 I think, they are like The Flaming Lips form the dark side of town. On thinking of my favourite songs this track was one of the songs that I automatically knew was in my top five. I remember seeing Mercury Rev in the Glasgow Barrowlands and being totally blown away by this song, they know how to perform! Opus 40 always makes me smile, it doesn’t matter how bad things can get for me, one song can change my mood from morbid to joyful in the few minutes that this song lasts. Levon Helm from The Band plays drums on this track, giving it’s undeniably smoothe groove and feel. This track is from their amazing album ‘Deserter’s Songs’, when I was given this album it completely opened my mind to how music can be more sonically dramatic and is definately an influence on my music and how I arrange songs.

4. Pavement – Gold Soundz
I have been listening to Pavement since the age of 16, I got into them at school through a friend, who let me hear ‘Cut Your Hair’, I loved how this band were so weird and loose with their playing, but still so grounded with their sound. ‘Gold Soundz’ is off their second album ‘Crooked Rain, Crooked Rain’ which was the first album I bought of theirs. As soon as i put it in the record player I knew this band were going to change things for me. Pavement are known to be ‘the greatest indie rock band ever’ and as much as I hate this term, its true! ‘Gold Soundz’ is one of those tracks that I just love rocking out to, the beat, the guitar lines, the lyrics, the vocal melody is just perfect, there couldn’t be a better indie rock song to define the genre. Anyone who doesn’t own a Pavement record, go out and buy all of them now!

5. The Velvet Underground – I’m Waiting For The Man
I couldn’t believe that I nearly forgot about The Velvet Underground! Lou Reed is a huge influence on both my lyrics and music. He can characterise the dark, ghoulish underground that always excites me. They were cool and played atonal music in a pop attitude before any other band even considered escaping to the dark side. This band delved into noise, sado masochism and drug abuse, they channelled all these crazy and horrid stimuli and created music that is so beautiful and honest that no band has came close to matching it. The Velvet Underground & Nico is not one of my favourite all time albums but I’m quite positive without that record and the ones to follow music wouldn’t sound the same today. ‘I’m Waiting For The Man’ is a fist in the air ‘fuck you’ to the world of suits and fast cars and a call on the outsiders to foreground, where we can revel and riot in the muck. It gets me going, it gets me going to the break of dawn!

——————————————————–
Visit Three Blind Wolves’ MySpace.
You can also listen to the original versions, and some cover versions, of these songs in the Onder Invloed Spotify playlist.

Three Blind Wolves will be on tour in The Netherlands this month. Make sure you go and see them play.