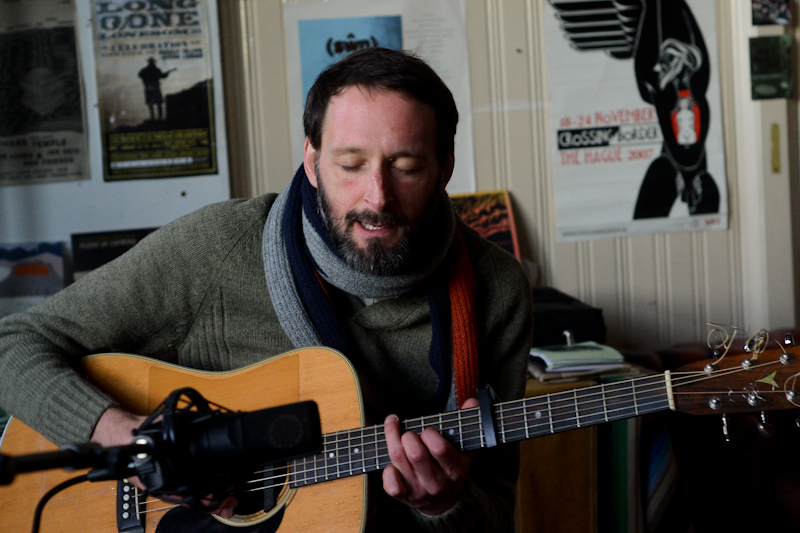 Onder Invloed is celebrating its 2,5 years anniversary. One part of the celebrations is this new section in which musicians will give you their Top 5 of best songs. Including a personal story behind the song. There will be a new Top 5 online every day in January. Read the stories, watch the videos and listen to the songs in our Spotify playlist. Episode 7: Alasdair Roberts.

1. Benjamin Britten – ‘At The Mid Hour Of Night’
(Philip Langridge, tenor and Graham Johnson, piano)
From Volume 4 of Benjamin Britten’s folk song arrangements, ‘Moore’s Irish Melodies’: a text by English poet Thomas Moore set to the Irish melody ‘Molly, My Dear’. I came across this recently for the first time when doing research for a recording project in Aldeburgh, Suffolk with a load of great musicians, mostly from London – early music arrangements of traditional songs. This song is a beautiful marriage of word and tune. What more’s to be said?

2. Wings – Jet
I heard this at a New Year’s Eve disco and, played at great volume, it reminded me of what a great songwriter Paul McCartney could be. Although I never really got to grips with the Beatles’ various post-Beatles projects, when I was 14 or 15 I was obsessed with the band (this was about 1990, 1991), particularly ‘Revolver’ (just ‘psychedelic’ enough not to be overwhelmed by the whimsy which always made ‘Sergeant Pepper’ hard for me to stomach in full).

3. Hamish Henderson – The John MacLean March
An acquaintance, Nathan Salsburg, asked me to curate the release of a compilation of all of Alan Lomax’s recordings of Scottish music – this is my first choice from that. A rousing song about the Red Clydeside leader from one of Scotland’s foremost poets, folklorists and internationalists.

4. Penny Morrison – Am Bronn Binn
This is my second song from the Lomax recordings. An intriguing, ancient Scottish Gaelic ballad with Arthurian lyrical content and a beguiling modal melody. I have been listening to a lot of Gaelic music recently as this month I will be collaborating with a singer from the Isle of Lewis called Mairi Morrison, who is a native Gaelic speaker.

[No video available online, correct me if I’m wrong.]

5. Matteo Salvatore – Mo Ve’la Bella Mia Da La Muntagna
An Italian beggar song from Puglia – Matteo sings a beautiful duet with an unidentified woman on his Harmonia Mundi-reissued album ‘Canti Mendicanti’. I picked this up when I was on tour in France with my labelmate Joanna Newsom and her band; this song struck me as the pick of the bunch and my friend, the guitarist RM Hubbert, may record it with me singing and somebody else singing the harmony – not sure who yet!

——————————————————–
Visit Alasdair Robert’s website.
You can also listen to the original versions, and some cover versions, of these songs in the Onder Invloed Spotify playlist.