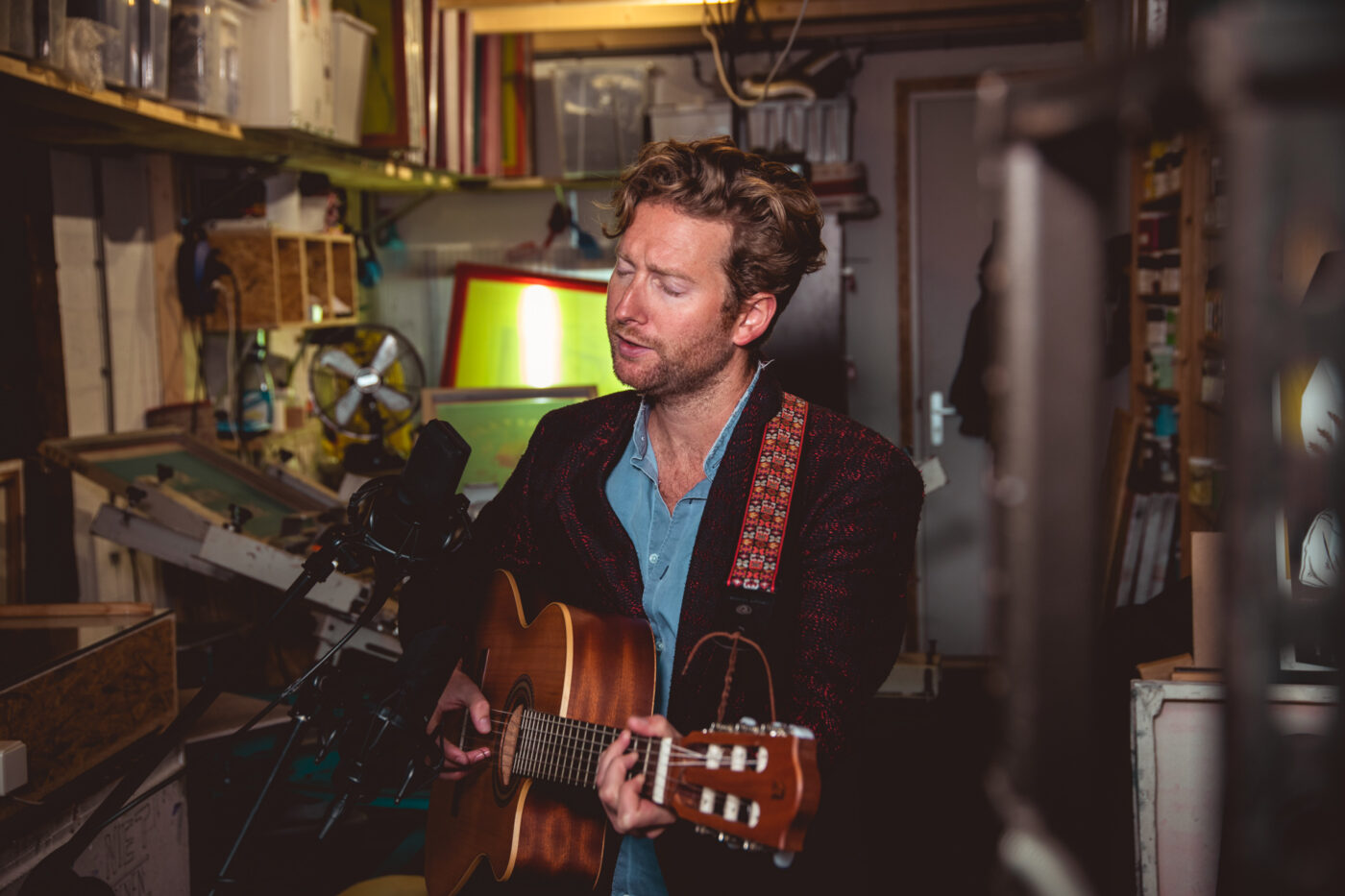 I don’t have a lot of favourite record stores. Just three of them, really. Plato in Utrecht, Monorail in Glasgow and Velvet Music in Amsterdam. The latest, situated on the Rozengracht – around the corner from my former job – is run by two women, Merel and Esther, and it’s where I once filmed Anna Burch’s session. Esther is the one who introduced me to Tom Cunliffe, a songwriter from New Zealand. Not only did I fall in love with his latest record Template For Love, we also met up in Joris Diks’ screenprinting studio to film this session with Bruce Springsteen and Paul Anka covers and two originals.

“No one should have to be a teenager when nu metal is popular.”

Tom Cunliffe is one of three children of an English mother and a New Zealander father, who met when she moved into his flat in London. “My dad was staying in this big house with eighties hipsters, while my mom was a law student who moved there from Manchester. A lot of New Zealanders would travel to England when they finish university, and visit other countries on route. My dad was a cheesemaker.”

Cunliffe’s parents listened to a lot of Van Morrison, Bob Dylan, Bruce Springsteen and Joni Mitchell. “My mom loves Joni Mitchell and anything Irish, she was very loyal. As a teenager, I would put my headphones on and listen to Linkin Park or something like that.” He laughs: “No one should have to be a teenager when nu metal is popular! That song about butterflies must be the worst song ever.”

Listening to Tom Cunliffe’s music, I got a rather British vibe, that wasn’t solely due to his accent. “I don’t really know where it comes from, to be honest. Maybe, I’ve listened to so much early folk stuff and a lot of those melodies came from the British isles. Sometimes people say: ‘Oh, you’re clearly influenced by this band and that band’, and I have never heard of those bands. It happened with my first record when someone compared me to The Pogues and The Waterboys. I knew The Pogues, but then I started listening to The Waterboys and thought: ‘Oh my god, this is incredible!’ So, sometimes I get great tips by being compared to someone I didn’t know of yet.”

Cunliffe and his parents moved to Christchurch, New Zealand at age seven. “I remember it quite strongly, I remember when my mom told me and I was distraught. We were in Islington, London, in a lot of traffic and I just started crying about my friends. When we got to New Zealand, I felt like a weirdo. Because I had a posh English accent and London was very different to Christchurch. I got used to it a little bit, but I have always felt a little bit like an outsider.”

“This is something I could do.”

Later, he moved to Wellington, via Dunedin. “Dunedin wasn’t my place, but I went on to study Design in Wellington at the University that was full of interesting people. That’s when I started playing music too, quite late indeed. In my final year of university – in 2008 or 2009 – I started writing songs, because I picked up the guitar and realized I could play those Bob Dylan songs with just three chords. Those early folk songs really spoke to me and grabbed me. ‘This is something I could do!’.”

“Making records was something other people did.”

Cunliffe wasn’t writing songs with the intention for anyone to hear them though, because by his own account, he didn’t quite know what he was doing yet. “So, for a long time I just wrote songs and only played them in the flat. But when I moved to Auckland I met lots of great musicians, who are now really good friends. They convinced me and said: ‘You’ve got all of these songs, go make a record!’ To me, making records was something other people did.”

It took some time and convincing for Cunliffe to realize songwriting could be more than ‘just his creative endeavor, like design and advertising were’. “Music is where I could fully express the search for things in life that mean something to me. I had to find a way to turn it into something. It was just a slow process of realizing that was something I needed to do.”

Getting used to sharing your music is one thing, walking on stage to perform in front of people is another, Cunliffe would soon find. “At the start I drank a lot. Although I didn’t realize it then, there were a lot of times where I was quite drunk, forgetting words. And it’s not that I consciously tried to drink away stage fright, but I was quite happy to drink because it made it easier. I’ve just gotten better by playing a lot. And there’s no alternative to playing shows, so I need to play more shows, always.”