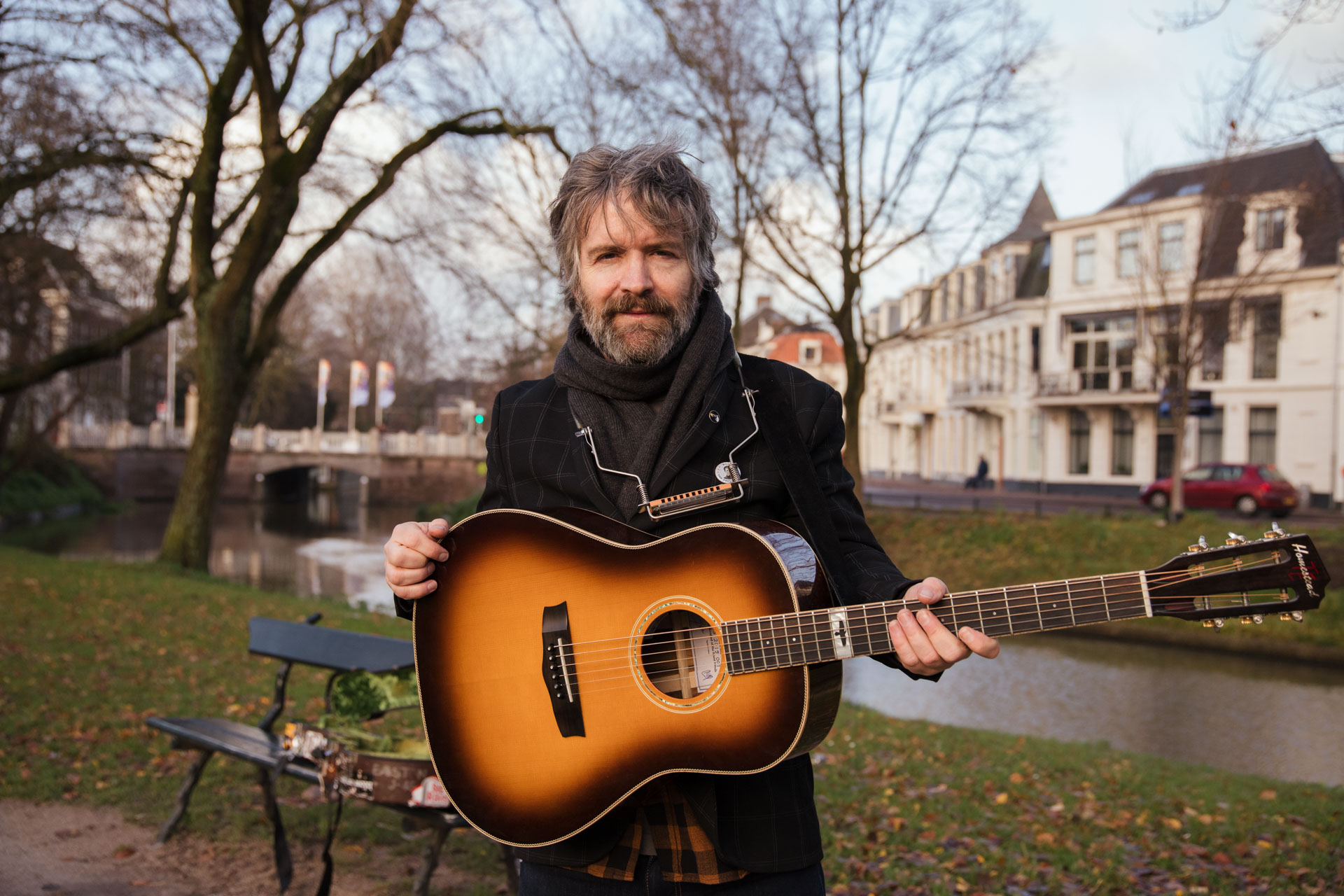 About ten years ago, Dutch drummer Kees Schaper (from Tim Knol‘s band) toured with American songwriter Tim Easton. A perfect chance for me to film with Easton I thought. We did and it was great. Now, a decade later, I’ve taught myself to film and Easton is still the amazing songwriter he already was. Last month, he performed at The Influences’ live show in Utrecht and we went into the cold to film two new covers, of David Bowie and Woody Guthrie songs.

Easton released about ten records since we last filmed, and he doesn’t seem to be slowing down anytime soon. His latest record is actually a book, accompanied by music. So, seen as he’s a gifted writer, I decided to ask him to write a guest essay about the two influences he covered in Utrecht: Bowie and Guthrie.

Please read it below.

When I sing a cover song at one of my shows, I do not want to have to read the lyrics. It has to be a song that I have already made mine. What’s the point of imitating a recording that we all know? There are a lot of tunes I would like to cover. Songs that I think are cool or clever or songs that I might sing because I want you to think that I am cool. “I’m Waiting For My Man” by the Velvet Underground is an example; or something by Big Star or Elliott Smith. These are artists that I love for their vibe more than the lyrics. All songwriters should learn covers in order to learn how to write songs just as novelists read novels to learn how to do that. Some songs employ tricks and mirrors and fancy turn arounds. Some songs speak to us personally so we have them memorized almost from the first time we hear them. That is the case with the two tunes I covered.

It makes perfect sense to me that David Bowie and Woody Guthrie are influences of mine. They write tunes I feel I could inhabit. Perfectly weird songs that could be about anything you need them to be. Bowie’s “Five Years” employs a classic cut and paste lyric that makes zero sense and complete sense at the same time. You can almost see him going to town with the scissors and glue on that tune. I can still see the girl in London who first played me this song, and how I wanted to kiss her right there and then. The lyrics practically instruct you to do this, or at least that is the way I heard it. I have performed this tune for years and even ripped it off a bit for a song that I once wrote in Amsterdam called “Dear Old Song And Dance.”

Bowie is not often thought of as a solo acoustic artist but of course that’s where he started. With other tunes of his, such as “Andy Warhol,” one can feel the lone-wolf-freak-folky-songwriter at work again. I may have altered his words a bit on this take of “Five Years” but I believe Ziggy wouldn’t mind at all. Before the lacquer even dried on this album, Bowie was off on another ride, leaving most in the stardust as a true creative master will do.

Speaking of dust, Woody Guthrie is definitely the original freak folk genius. Did you know that the pride of Okemah never wrote an original melody or tune? Apparently, he took every melody and chord progression from older folk songs and just re-wrote the words. That was his gig. Thousands of songs, or lyrics rather, but no original melodies. The thing about Woody’s lyrics is that they still resonate today. Certainly, this is the case with “From Baltimore To Washington,” which I have definitely taken some liberties with in regards to the arrangement.

We all have our strengths. Woody’s was observation, reaction, and motivation. He saw injustices, or just humankind at work, play, and rest, and wrote exactly what he saw. I don’t think anybody would argue with me that he was quite the restless soul, and not one for sticking around too long if there wasn’t a good story to tell. This tune has a lot of motion in it. Another traveling song from a master of the ramble. I feel plenty in common with him and the friends and family that surround his legacy. Every year, there is a really fun gathering in Oklahoma right after the July 4th weekend. It’s called Woodyfest. You should go some day. You can hear hundreds of songs and songwriters at work, carrying on the joy of people who care about helping other people get by in this crazy world.

Thanks for listening, and I’ll see you around the neighborhood.