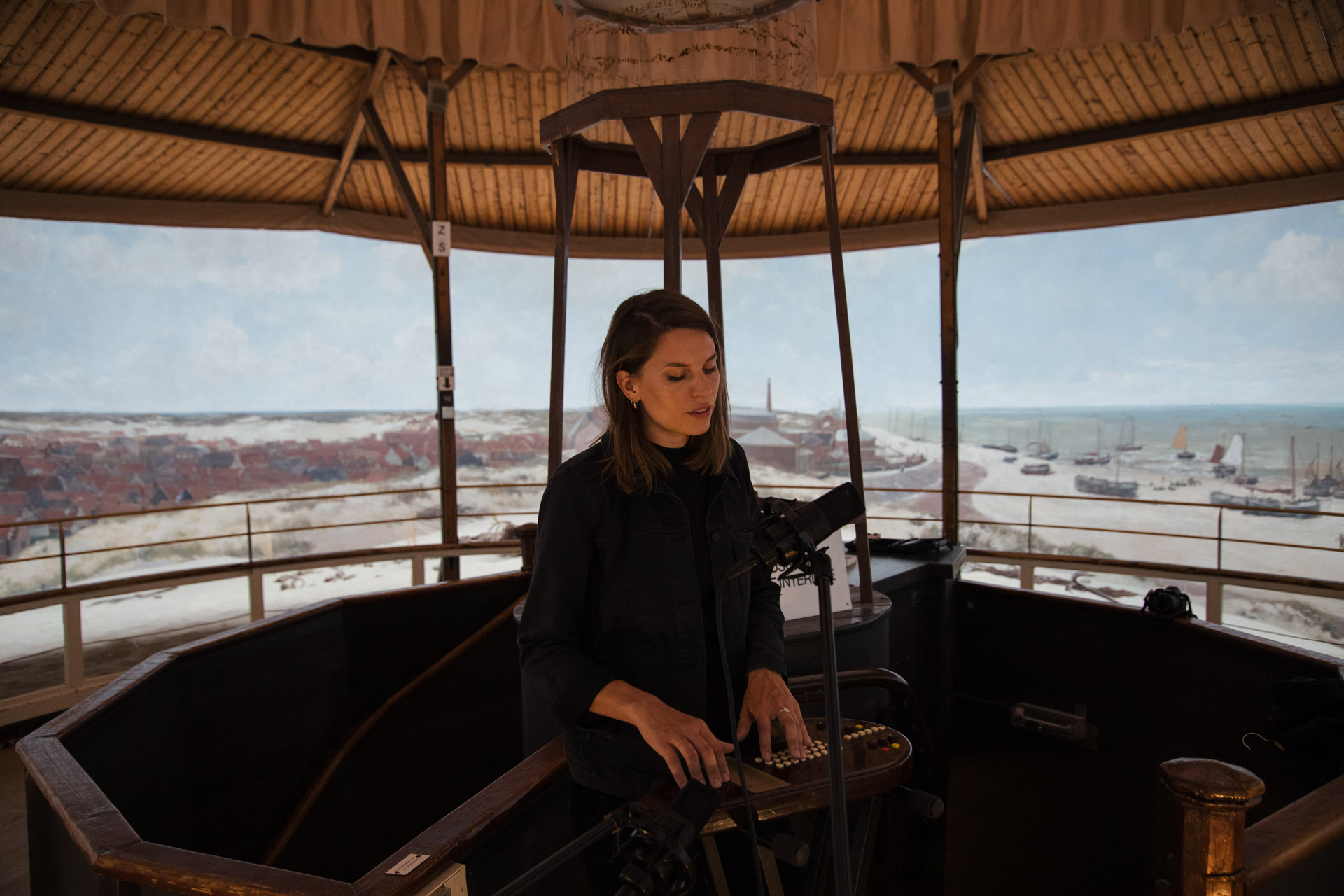 Learning and development are recurring themes in my conversation with Sofie van Dijck, a.k.a. Sofie Winterson. As a songwriter she continously seeks new methods and inspiration. That is probably what makes her music so interesting: a fresh mix of traditional folk and indie pop, with lyrics that are often darker than the sound suggests.

Watch her play Love Me Less and a cover of Unknown Mortal Orchestra’s So Good At Being In Trouble in the mesmerizing location; museum Panorama Mesdag in The Hague. Surrounded by Europe’s biggest panorama, she recorded an incredible session.

‘My guitar teacher was my personal Spotify’

‘I listened to a lot of soul music as a teenager. My older brother and sister often let me hear songs and told me “what I should listen to”. When I was 11 years old, I went to the store with my older sister to buy my first record. She said: “You’re going to remember forever what your first record was, so you really need to find something good.” My first single was 2Pac’s Changes and my first record was a live album by Erykah Badu; amazingly beautiful. Because of my older brother and sister, I started to choose music more consciously.’

Van Dijck comes from a musical family anyway: her older brother Joost drums in the band My Baby, in which younger sister Cato sings. And before that, already at an early age, they formed soul pop band The Souldiers. ‘I heard a lot of The Beatles at home first, then it became more about soul. My brother and Daniel, the guitarist of our band, had the same guitar teacher as me. He had a huge record cabinet and made us listen to a lot of things, and was our personal Spotify at the time. I learned a lot from that.’

‘I was about sixteen years old when we started the Souldiers and I listened to a lot of soul and folk. From high school on we were practicing and playing endlessly.’ The Souldiers played a lot of covers, but they also wrote their own songs. Well-known Dutch pop journalist Leo Blokhuis and actor/singer Ricky Koole discovered the band after a few years and released them on their record label. They were a guest on the national talk show De Wereld Draait Door and suddenly the band got a lot of attention. ‘The impact of that show was huge. I remember playing in the Maloe Melo venue in Amsterdam the next night and suddenly there was a row of people waiting on the street. We didn’t even believe they were there for us. Those people were purely there because it was announced on television.’ In total, The Souldiers existed for about eight years. Sofie went her own way with Sofie Winterson, sister Cato and brother Joost are now touring the world with the “roots driven hypnotic dance music” of My Baby.

‘My affection for Unknown Mortal Orchestra came a lot later. I used to have quite a snobby taste: I was really only into old music. When I went to the Conservatorium van Amsterdam (Amsterdam University of the Arts), I came into contact with more dreampop-like styles.’ She remembers seeing The Bird And The Bee, whose singer is the daughter of Little Feat’s Lowell George. ‘I reckoned she is also a kind of folk-daughter but makes pop music herself. Why would that not be an option for me? During that period, I started to be more open to indie pop and other new music. Unknown Mortal Orchestra was very special to me because it he mixes folk with newer music. It’s got many roots influences, while also being real pop music.’

The conservatory proved to be – unexpectedly – the right place for Sofie’s development. “I went to drama school first because I thought, “I’ve already been playing music all the time, I want to act too.” Of course I still love acting, but I learned that drama school wasn’t for me. Cato already went to the conservatory and when I saw how much space and how many opportunities she got in the third year, I got excited too. So, I went after all. There, I learned something different than I thought. I expected to develop myself further for a few years, but I didn’t think my complete taste in music would change. Before then, I lived in a bubble with the band. At the conservatory I discovered my own taste, regardless of my family. The family and the band worked as one organism from an early age: “This is what we stand for”. It was really very cool, but in the end everyone is different.’

‘I started writing a lot and those songs became something that I couldn’t use within The Souldiers. Slowly, I realized I was really doing something else. You have to play with all other people at university and I learned a lot from that. It’ll never be as organic as playing with family, but it does offer a lot of freedom as an artist. Like when you’re starting a new relationship; you can reinvent yourself. For a while after finishing university, I wrote alone and looked for songwriting methods that suited me. I still get the most satisfaction out of that: writing songs that are as good as they can be. Express what I want to say in the best way available to me.’

Solid ground under her feet

Van Dijck alternates living in the Netherlands and Los Angeles. ‘I find it easier to write when I force myself out of a routine. By changing locations, it happens quite naturally. Los Angeles is very spacious and large and I often make trips to the desert. Going into nature always works very well. Then I have the peace of mind to zoom out. When I’m stuck in patterns, I try to zoom out to see overarching themes with a more open look. That doesn’t necessarily need trips to nature, it can also happen by reading something interesting.’

‘In The Netherlands I can be very productive and I often already know who I want to work with. In Los Angeles, things are just different, and I need to look for new connections. It’s inspiring not knowing exactly how I’m going to do something. It’s also tricky, because I never really grow roots and feel solid ground under my feet. I really like living in both places, so for now it’s alright. I would prefer to be in both places at the same time though.’

Not only does she alternate in places of residence, she also switches up her writing methods. On some projects she writes together with other musicians, then she chooses to go it alone. For example, she wrote her album Sophia Electric (December 2018) solo but collaborated with Dutch musician Benny Sings for the EP Moral that followed in September 2019. ‘It’s educational to work with other songwriters. It was very interesting to see his process. We worked very well together and approached it as a craft: what kind of song do we want to make? Now I’ve been writing on my own again for a while. Both ways are nice, and both are inspiring.’ 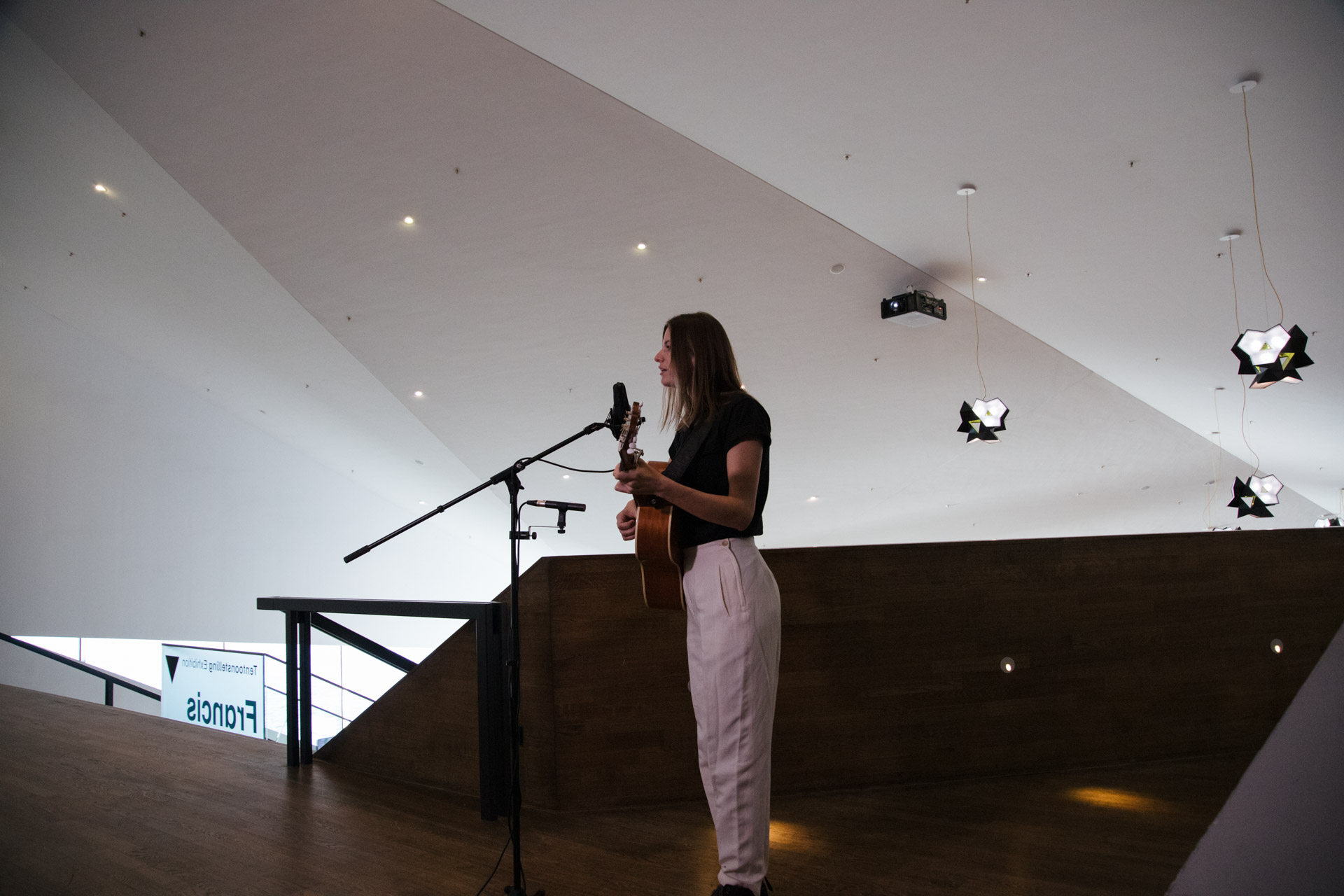 May 28, 2020
Sofie Winterson and I only film in musea it seems. Last year we had the honor of filming at Panorama Mesdag in The Hague -…