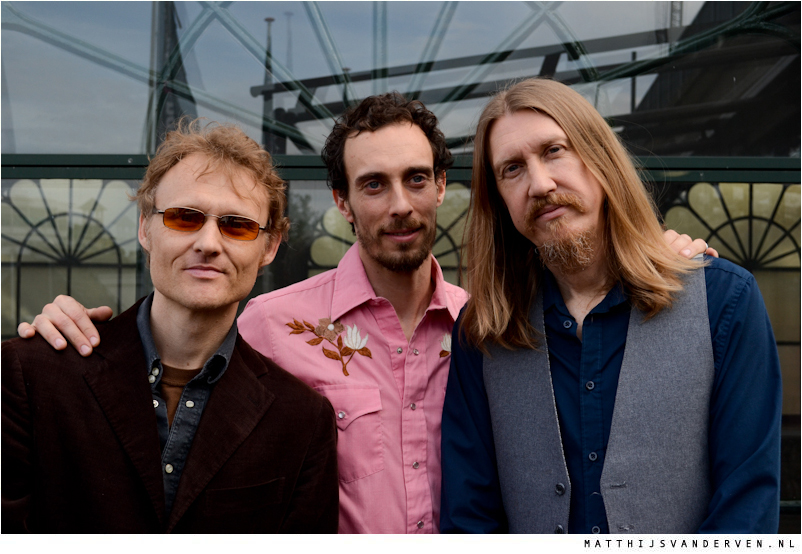 ‘When I die, I wanna be sent back to try, try again.’ (From: Neon Tombstone) It’s one of many beautiful sentences in the lyrics by Nashville-based group The Wood Brothers, but there was no need for trying again in this session. At the Mirliton Theater in Utrecht, not one song needed a second take, all I had to do was capture them having a good time.

The two brothers, Chris (also in the jazz trio Medeski Martin & Wood) and Oliver Wood, are complemented by multi-instrumentalist Jano Rix. For a long time, the brothers lived in cities miles apart from each other, but they now all live in Nashville, where they also recorded their latest – rather addictive – record The Muse (2013).

That record has been one of the most played albums in my house, because if I’m not listening to it, my girlfriend puts it on. She’s become as addicted to the brothers’ music as I am, if not worse. Of all the addictions one could have, this is probably the best option. There are too many great songs on the album to just name a few, and it really is the best when you listen to the album from start to finish.

As if the musicianship of the band members isn’t enough – Chris Wood must be one of the best bass players I’ve ever seen play, and his brother isn’t any less on guitar – their lyrics are another reason to keep listening. Every time I listen, another beautiful sentence pops up. It’s very subtle, as are the harmonies that deliver them. Seeing them play live in Amsterdam a couple of days after this session sealed the deal: I’ll probably stay an addict for some time to come. On stage they combine all of the above with a sense of humor, be it the talks in between the songs, or the dance moves by Chris Wood.

It was Chris’ bass playing in Medeski Martin & Wood that turned Dutch songwriter Mathijs Leeuwis into The Wood Brothers. Since it was Leeuwis who told me to listen to their music, I asked him to contribute some words to this post:

“Music couldn’t be complicated enough for me when starting out as a young guitar player. I got completely fascinated with jazzcats like John Scofield. Exactly this guy would become the driving force behind my (still lasting) will to simplify my music. Something I couldn’t have foreseen.’

‘The 1998 Scofield album A Go Go was a collaboration with avant-jazz-funk band Medeski Martin & Wood. It was here that I first heard ‘complicated’ music with a beating heart, music I could really feel. I could relate to it on a more fundamental level. Not just with the head, but with the heart. When I started digging into this obscure jazz-funk band I soon found out it was the raw groove of bass player Chris Wood which made me really feel this music.

From Medeski Martin & Wood it was but a small step towards the pure songs of The Wood Brothers. Chris Wood made me see that all music – ‘complicated’ or ‘raw’ – comes from the same bottle as long as is it from the heart.”

Up Above My Head (Sister Rosetta Tharpe)
YouTube | iTunes | Spotify

I Got Loaded (Little Bob And The Lollipops)
YouTube | iTunes | Spotify