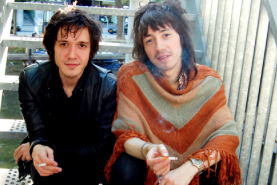 This thing is getting out of hand. In the beginning of October, one of my favourite bands of the last decade, played in The Netherlands for the first time. And they were more than happy to record a session in the afternoon, in the Paradiso upstairs. The Redwalls from Chicago brought their colorful revolution to The Influences.

I had been looking forward to recording this session for a couple of months, and they didn’t disappoint me. Eager to record some covers, they welcomed me and before we even knew it, all three covers were done. Their choices weren’t very surprising, given their own music, but very well performed. And the interview turned into the longest one yet.

Without having listened to The Redwalls, you’ll probably ask yourself what’s so special about them. Well, let me tell you. The musical background of the bandmembers (co-founder and guitarist Andrew Langer didn’t participate in the session because he was leaving the band two shows later – new band: The Sleeptalkers) is build around bands like The Beatles, Bob Dylan and The Band, and probably The Rolling Stones.

I’ll quote Genevieve – from The Rock Page in New York City, whom I met after the show in Amsterdam – for a little bit: ‘If you don’t know The Redwalls, let me explain. They are four geniuses from Chicago who, in some eerie way, channel the rock of the 60’s, constantly being compared to Dylan and The Beatles. Their songs are so catchy, it has been scientifically proven that you cannot refrain from tapping a foot or bobbing your head when hearing one.’

The Redwalls are one of my favourite bands ever since they released their debute album ‘Universal Blues’ in 2003. The album is unique. The lyrics are sometimes ‘just’ about love, but more often they’re a subtle protest against the (Bush/American) administration. Pakked in raw songs as well as in melodies full of all kinds of hooks, which will turn you into a Redwalls-addict soon enough. Written and played by a bunch of rarely pure musicians who all got blessed with voices like John Lennon.

Since then, they released two more great albums, ‘De Nova’ in 2005 and ‘The Redwalls’ in 2007. The band – next to Langer excisting of drummer Rob Jensen and founding members and brothers, Justin and Logan Baren on bass, guitar and vocals – toured with Oasis through the USA and the UK, played almost everywhere in the neighbourhood of hometown Chicago and played live at David Letterman. No surprise, an Onder Invloed session is logically the next step.

All kidding aside, the night in Paradiso was great. Even without almost any volume left in Logan’s voice, the band made sure the visitors got – more than – what they came for. It was a special night, even more so since there were more Onder Invloed participants in the building. The Cosmic Carnival from Rotterdam and Tim Knol from Hoorn showed up, as well as mister Soldaat (scheduled for a session in 2009), who wished he was 20 years younger when he heard there was going to be a open spot for a guitarist. The Langer brothers wished the same by the way, after listening to one of his songs later in the evening.

It became a very long and funny night full of influence with TCC, Tim Knol, some friends and Justin and Logan Baren in the city of Amsterdam. I won’t bore you with all the details, let’s just focus on the important things. With great pride and joy I present you The Redwalls – Onder Invloed session: Bob Dylan, The Beatles and Velvet Underground.