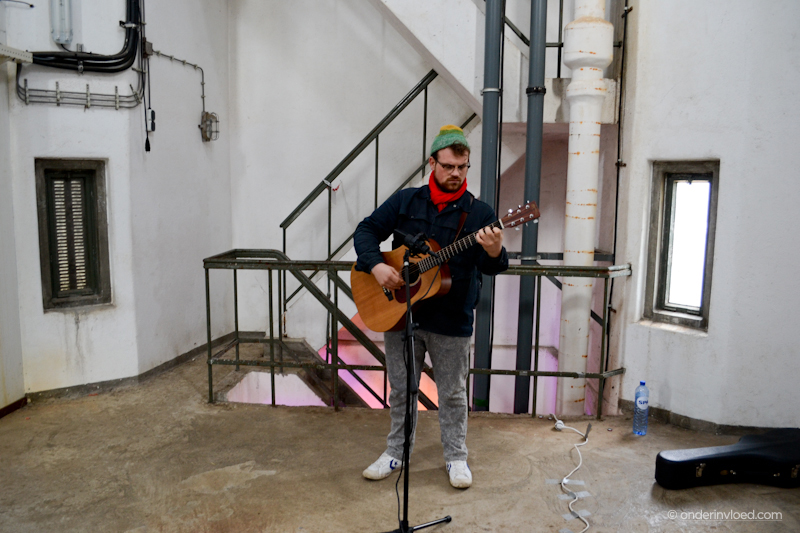 When I was talking to Grasnapolsky promoter Jelte Heringa about filming sessions during the festival, the first act on his line up he talked about was Stephen Steinbrink. I didn’t need much convincing to ask him to be one of the six acts to record a session. It became a beautiful and intimate performance.

Arranged Waves, the latest of a long list of releases – 7 full length albums since 2007 – by the 26 years old Steinbrink, is a collection of delicate and subtle yet inventive folk songs. His falsetto voice sounded extra nice with the extreme echo of the old water tower when we filmed this session early Sunday afternoon. It became the perfect start to our second day at the Grasnapolsky festival.

What’s so great about songwriters like Steinbrink, is that not only musically but also lyrically there’s always a lot to discover, even when playing a song for the umpteenth time. It’s subtle enough to be easy to listen to, but distinctive enough to stay interesting. You need to pay attention, but when you do, you’ll be so glad to did. As were we, when filming him play Tangerine and covers of Bee Gees and The Replacements. If you think that Bee Gees are a surprising influence, have a listen to It’s So Pretty (What You Did For Me) on Arranged Waves for proof that it is not that big of a surprise.