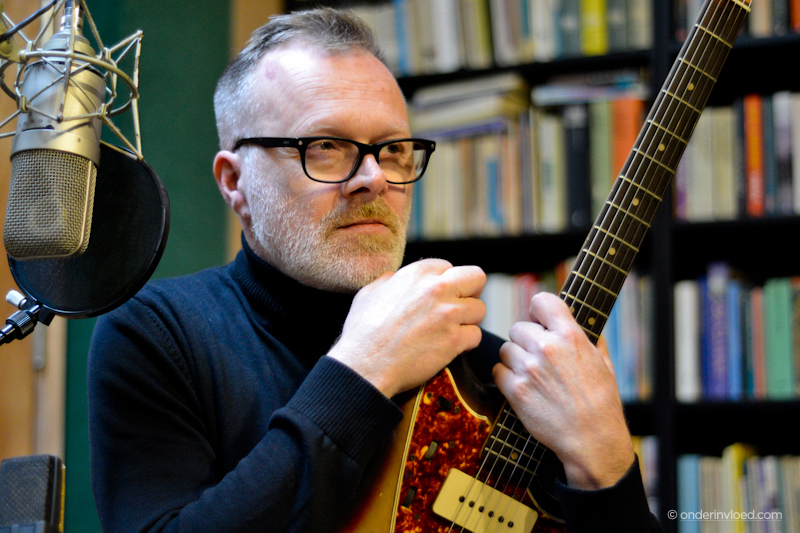 It was still in the early stages of Onder Invloed’s existence, when Paulusma recorded his first session. Since then, he’s performed at multiple of our live events, including the book release, in which he’s also featured, and recorded two traditionals for the record we put out. That’s all in the past, and now he’s recorded a stunning new session with his band at the Mailmen studio in Utrecht.

Read the interview with Paulusma below the videos.


The Crystal Ship (The Doors)

His latest record Pulling Weeds – his fourth since the beginning of his solo career in 2006 – was all done and ready to be released when the plans for a Daryll-Ann reunion interfered. After an extended tour of club and festival shows with the band Jelle Paulusma had a lot of success with, the album was released in November 2014. On Excelsior Recordings, the record label that released the Daryll-Ann records. The move felt obvious to all parties involved, the singer explains. Paulusma had a great time during the reunion, but also couldn’t wait to take these new songs to the stage with his own band.

Having spoken to him many times since filming the first session in 2009, I can’t help but notice Paulusma seems more content lately. “I feel very much at ease. When you’re young, you often fear missing out on things. I’m glad that’s faded somewhat over the years. I’m really happy with my life as a musician and the fact I’ve been doing this for such a long time. At a certain point everything is a bonus, when you can be doing what you like to do. It’s the biggest blessing there is.”

“Writing and recording is mostly a solo affair”, Paulusma admits. Especially after a disappointing experience trying to record the previous album Up On The Roof in a studio. “Having to go to a studio and put up with all the bullshit of having to re-record everything, it’s nonsense. I intended to take a ‘professional’ approach that time, which is stupid, because a studio is nothing more than a room with stuff in it. In the end it became something other than I had imagined.”

Working on Pulling Weeds, Paulusma fell back into his old routine: “All by myself, in my own studio is where I feel most comfortable. I’ve written and recorded everything at the same time. When it was all there, Rob (Klerkx) and I rehearsed a couple of times and recorded all his drum takes in one day.” Ever since 2008, his live band has been pretty much the same group of musicians, with Theo Sieben on guitar, his twin brother Coen on backing vocals and percussion, Elmar Klijn on keys and Rob Klerkx on drums.

It appears his band members have little influence on the records, but they do have a lot of input at the live shows. “I make the album and then we get together and have a great time. I don’t have to tell them much, because they’re all skilled musicians. At the start I might be a bit strict, as there are a couple of mandatory elements to the songs. Other than that, they can find their own way. They’ll have to; it needs to stay fun and exciting. Music has to move and evolve. I get that some people want what’s on the record, but at our shows, the songs are approaches of that.”

Listening to his latest record, you can hear Paulusma reflecting on life, and not shying away from the big themes. “The songs aren’t any more or less politically engaged than on previous records, but there are certain things that stood out to me. I wrote Left For Dead in response to the news of those guys in Eindhoven who felt the need to beat and kick a boy rotten. I can use these news stories, they’re grateful themes to explore. You won’t find some big important message, because I’m not a moralist, but the lyrics are engaged for sure.”

Paulusma hopes his album is a reflection on the time we live in. “A lot of shitty things are happening and people tend to respond to everything in a very spastic and wrought-up manner. People have all these media at their disposal to blurt out their opinions. My god, what’s the point? Why not use your time to take on more serious matters? It’s an observation and at the same time I’m taking my distance. Let them sort it out themselves. That may sound like I don’t care, but of course I do care.” One of the songs is about the lack of leadership. “Where are the politicians who made you feel that you were in good hands? Leaders who provided stability and dared to make decisions… That whole debate on how to treat refugees in The Netherlands of late is a good example. Outrageous.”

That said, it’s time to have a look at the two covers he chose to record. “The Doors is a rather obvious influence for me. Everybody knows by now what Neil Young has brought me, but another important rock group for me growing up was The Doors.” Paulusma’s been carrying them with him since high school; which is when he discovered their music. “I’ve always had a love hate relationship with the band, because in my opinion Jim Morrison sometimes was a bit of a poseur. My interest in them came and went, multiple times, but by now their music’s stuck in my system.”

The second cover has some parallels to Paulusma taking a bit of distance and reflecting on what’s going on. Lee Hazlewood’s My Autumn’s Done Come goes a little further and talks about retiring and basically not caring anymore. “I’ve known the song for a long time already. He’s sung it on the record with the Dutch Metropole Orchestra that I loved. I’ve always wanted to play this with my own guys. It’s got a great chord change: Two minor chords on end, very gloomy and sad. Not that I’m so much a gloomy person, by the way. When Theo and I were messing around on guitar a few years ago and I played this song, he started to play along. Ever since then we’ve had plans to cover it, but it never happened. This session was the perfect occasion to dust if off.”

Most people will know Hazlewood for his These Boots Are Made For Walkin’, which he’s also sung with Nancy Sinatra. “He wasn’t a very cheerful man, but he had a special voice. The song also isn’t cheery, but the lyrics sort of are. It sounds gloomy and all, but he basically sings that he’s acquiesced in aging and pretty much is enjoying it. There’s no urgency, he doesn’t give a shit anymore. It’s good to find some sort of balance. That appeals to me. But here we are, talking about getting older once again…”

Paulusma is already writing new material, which isn’t strange, since Pulling Weeds was already finished in the end of 2013. He doesn’t often feel an itch to write new songs. “It’s more the uncertainty about what I’m going to make. Although I might seem rather confident, it’s different when it comes to these things. I have to find something that suits me and doesn’t bother me by sounding like anything else. I often get in my own way. Four records a year would have been possible, if I didn’t get annoyed by a lot of the things I write. I just wish I could let it go when something sounds too similar to me, because no one else notices. Other than that, I’m doing great”, Paulusma adds laughing. “It’s only music, it’s not at all that important.”