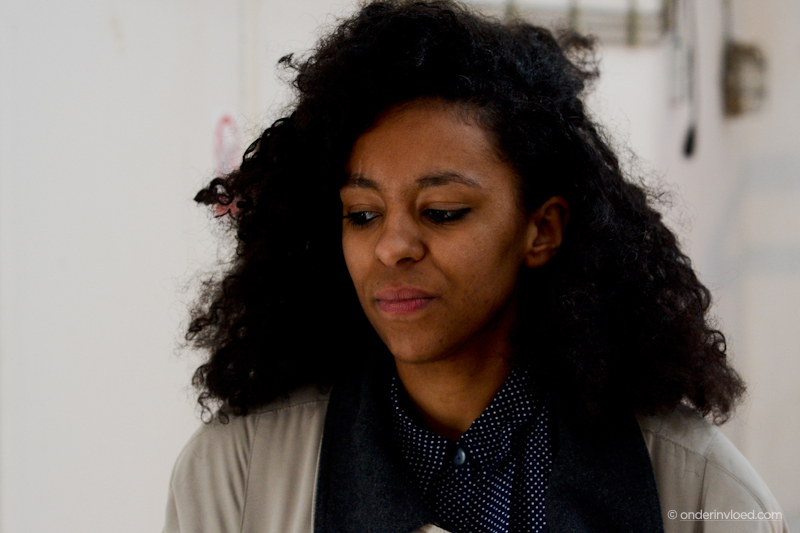 Nana Adjoa is a young musician who’s played bass in quite an impressive collection of bands already, one of the latest being Janne Schra. It wasn’t until last year though, that she started performing as a solo musician. She made it to the final of the Dutch national talent competition De Grote Prijs van Nederland and last February we filmed this session during the Grasnapolsky festival.

Read the interview with Adjoa below the videos.

Do I Wait (Ryan Adams)

Down At The Root

“My parents used to play a lot of soul, funk and reggae. We had records of Stevie Wonder, Earth Wind & Fire, Bob Marley and Parliament in the house. In the nineties, they started buying cd’s, mostly R&B: Blackstreet, Joe, R-Kelly, K-Ci & JoJo, Usher, Destiny’s Child and Michael Jackson. We even had a couple of cd’s by the Dutch R&B boy band Replay”, Adjoa (who’s real last name is Effah-Bekoe) laughs. “A lot of modern black music.”

“During puberty I started listening to a lot of rock music, which was a big difference to what I was used to. From that point I’ve kept widening my horizon. But, probably like many others, Jeff Buckley’s Grace was a turning point. It sounded like nothing else that I knew back in high school, and I was hooked.” Since then Adjoa has been listening to a lot of singer songwriters and started writing and recording her own songs. “I don’t have one big example as a musician, but I have a preference for musicians and singers who you recognize immediately, like Nina Simone and Nick Drake for instance. Both of them are truly authentic.”

“I’m a little ‘late to the party’ with Ryan Adams and Norah Jones. I had a couple of albums by Ryan Adams on my computer and listened to them every now and then. The album Ashes & Fire that features Do I Wait was just released when I saw it in a record store while playing an instore show. I bought the record and this song immediately gave me goose bumps. After listening to this record many times, I went and checked all his earlier albums again and had myself a ‘Ryan Adams phase’. Do I Wait remains a highlight. I don’t really know why. It’s got a beautiful, simple, subtile song structure and build up. I like that the lyrics are sensitive but not dramatic. I don’t know… I don’t have to analyse certain songs that I like this much, it’s very much personal.”

“I saw Norah Jones perform at the North Sea Jazz festival after the release of her album The Fall. It was a much tougher and more alternative show than I expected and it impressed me a lot. Of course I already knew her earlier music and although I liked it, it wasn’t really for me, I thought. I really started listening to her music when I noticed that Brian Burton (Danger Mouse) produced a record for her. I love everything he does, so I was curious about this. The record Little Broken Hearts is great; everybody should check it out. The opening track Good Morning has lyrics in the first verse that fit the situation I was in. “Good morning. My thoughts on leaving are back on the table. I thought you should know. And maybe powerful actions, or powerful feelings, will keep me from going.” A lot of the time, liking music has a lot to do with discovering something at the right time. When I started listening back to her older stuff, it turned out to be for me after all. She’s extremely musical. Coincidence has it Jones also played piano and sang backing vocals on Ryan Adams’ Ashes & Fire.”

When it comes down to it, Adjoa says the people that surround her are her biggest influences. “In the beginning, when I was in high school, I was lucky enough to have a lot of very musical young people around. Especially in that period, we kept challenging each other to know as much music as possible and to play it too. The first serious band I played in was Joast, the solo project of ex-Taxi To The Ocean member Joost Oskamp. He’s a bass player, but also a songwriter and I joined his band when he finished his solo debut album. I was 18 years old and Joost became somewhat of a mentor. He told me what music to check out, how to be in a band, how the business side of music works and spoke a lot about bass and guitar gear. I learned a lot from him. Since then I’ve played with a lot of people and because every band, person and situation is different, I’ve learned a lot. That’s part of what makes it fun.” Adjoa plays and has played with bands such as Janne Schra, Sue The Night, A Polaroid View and Most Unpleasant Men. And I’m probably still leaving some out.

Adjoa likes where she’s at, right now. “Playing music is fantastic, so is playing the bass and writing songs. For the first time, I’m doing all of that with equal amounts of passion and focus and it’s really great. Before, I might have gotten used to and comfortable with playing a more serving role. I didn’t dare to show much of myself. I was 20 years old when I finally played a song that I wrote myself and was content with, to someone else.” She thinks it might just be a matter of aging. “I didn’t have a lot of experience as a singer and frontwoman and De Grote Prijs Van Nederland seemed to be a good way to grow in that aspect. It feels I only now started to seriously write things that I love, after years of doing and writing a little bit of everything.”