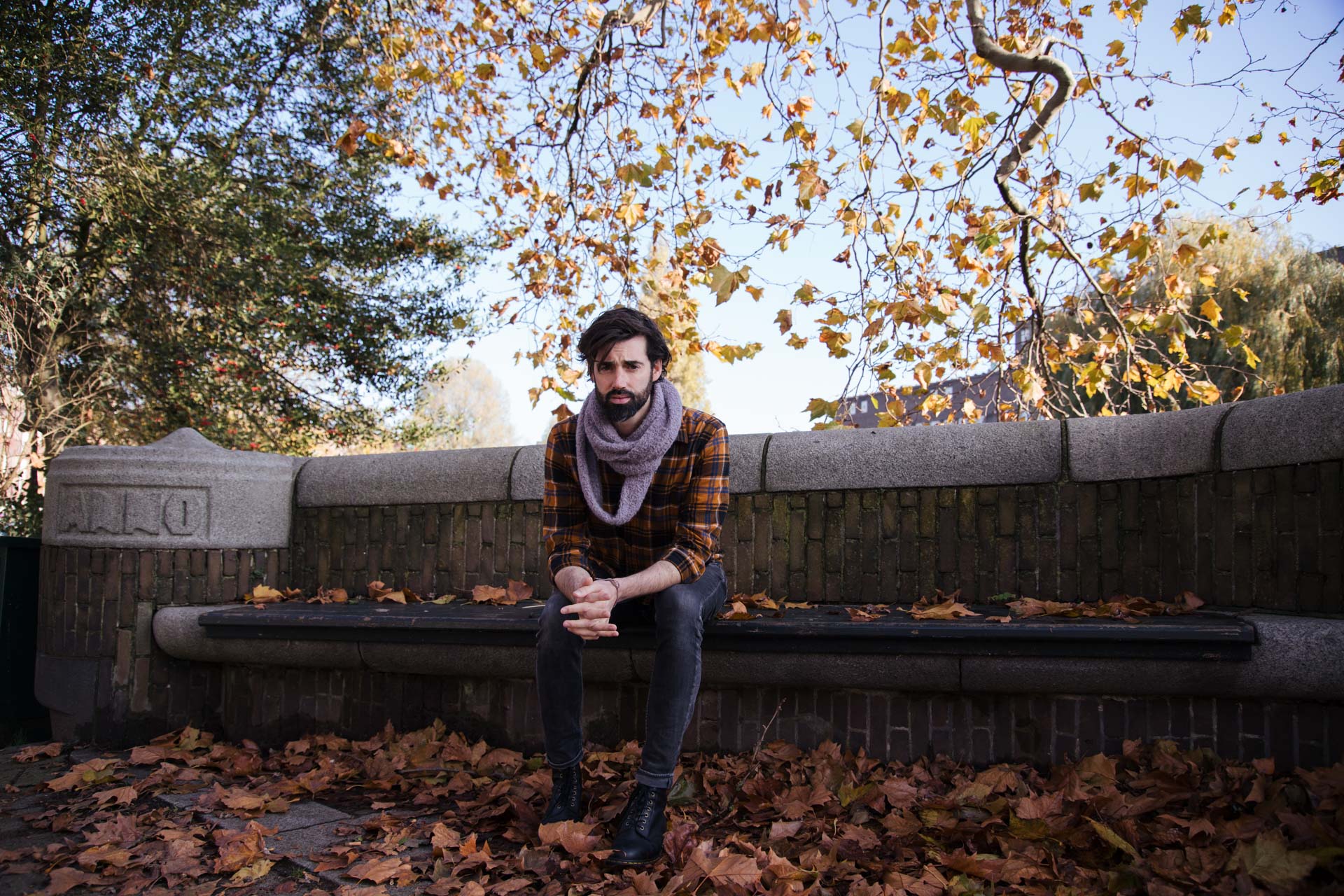 When we filmed this session, after Ruben Hein’s sound check for a Beach Boys tribute in Utrecht’s TivoliVredenburg, his most recent album Groundwork Rising had yet to be released. An album Hein described as a milestone at the time. “That record was important. And determinative, because it was a new step for me in a lot of ways. You can clearly tell it’s different from the things I’ve done before. Maybe I’ll always keep varying in the music I create. That might be somewhat awkward marketing-wise, but it is what it is.”

When Ruben Hein joins me at the café in the southern part of Amsterdam, he orders breakfast first, because with three young children there isn’t always time for that. “As a small child, I listened to music and got completely caught by it. As a teenager I played for yourself and joined my first band. Everything is cool at that moment in time.” Hein gestures with his arms wide in the air. “In the beginning, music is all energy and emotion rather than analysis and technique. For me, it became a little too much technique and analysis over the years. I needed to get rid of that. I had to guard myself for outside opinions and really listen to myself: Do I think it’s cool? On previous albums I wrote lyrics in collaboration with others or I had them written. But they were never quite my own. As a result, the lyrics never quite felt like they should have. Groundwork Rising certainly is a milestone in that respect.”

The Dutch pianist and songwriter – who has been a household name in the Dutch music industry for many years now – was 35 years old when the album was released. “It’s an age when you’re going to think, “What next”? I wasn’t the ‘young talent’ anymore and I had already done a lot of things. But what’s next? I may always keep wondering about that, but Groundwork Rising was a big step. It has a lot to do with aging, and maybe having children. I dare to be who I want to be, rather than being guided by expectations and opinions of others. I stopped caring about that.”

At the same time, Hein also likes a lot of different things and finds them all interesting. “It’s nice to do something completely different sometimes. One day I write my own songs in a kind of indie songwriter way, and the next day I’ll be playing jazz with an orchestra. Last week I was playing classically one day and the next day I performed my theatre show. It’s very nice, but sometimes it’s hard to find a balance between those different sides. It would be easier – and less confusing for listeners – if I could choose one thing and just go for it. Less diffuse. Slowly, I’ve come to realize that this simply is who I am.”

Hein’s the youngest of three kids from a family that grew up in the East of The Netherlands. His father was a doctor and his mother originally a nurse. “The records that used to be played at home are printed in my brainpan: The Beatles, Beach Boys, The Rolling Stones, Miles Davis, Ray Charles, The Mamas and The Papas, classical music. There was a piano at our house, so very early on I spent a lot my time there. At first, I learned to play the songs I liked, but as soon as I found out that some tones seemed to work well together, I started making up my own songs.”

If you thought Hein mainly listens to piano music, you’re mistaken. “It’s funny, because I get asked who my favorite pianist is all the time. But music for me is mainly energy: energy that has to be moved from a to b. It happens in some way and it’s reflected in your body: you laugh, dance or cry. If that happens, it’s cool. It doesn’t matter what kind of music that is. I listened to all kinds of genres from an early age.”

In high school, like almost everyone else, Hein went through the different phases: from Britpop and punk to hip-hop, for example. “I always followed a little bit later and noticed that in many genres I heard something that I thought was cool. Of course, I couldn’t really put my finger on it at the time, but there were things that made me freak out. Things I never listen to now, like, say, Wu-Tang Clan and the first record of Spin Doctors. But also, overly sweet jazz stuff like Yellowjackets, I listened to over my earbuds on my bike ride to school for years. I knew exactly where I was be on the route, through certain parts of a song.”

In hindsight, it was immediately clear that Hein would end up in music. “Of course, you don’t know what your life is going to look like, but when I was about fourteen years old, it was clear that this was going to be it. I started playing more and ended up in the local music scene of Nijmegen and Arnhem. I found that very exciting and my parents have always supported me, as long as I did what I liked.”

‘Fink taught me a lesson’

Hein didn’t feel the release of this album was any more exciting now that he had written all the lyrics himself. “I actually felt it was easier to talk about it now. On my first albums, the themes were perhaps a little too big; about my place on this earth. Listening back now, almost every song is about doubt. I’ve learned that I need to zoom in on some themes to make it manageable. On some new songs I’ve managed to keep the lyrics quite small, and I now notice that these are the strongest one on it.”

It’s a lesson he learned from Fin Greenall of Fink; the English musician Hein used to play with. “I remember writing a song about my dad in the third person. Fin said: ‘I have no idea who that man is. This is just a story; I can’t identify myself with it.’ I was very angry and offended about that at first, of course, but later I knew he was right. If you write in the first person, or describe what that person’s story does to you, it just becomes tangible. A wise tip.”

‘Some things I have to do myself’

“I don’t know if I feel like going this deep again for the next record. Of course, I want to keep it sincere and honest, but perhaps a little more light-hearted. I like darkness in music, but it’s also a bit of an attack on my system to create it. I really need to get into that writing mode every time, to open myself up in a certain way. Now I’m sketching; that’s just collecting and recording ideas. I did the previous record on my own, now I like writing with others again. But some elements, like the lyrics, I really have to do myself. I’ll ask for feedback after I’ve written something, but it has to be me who writes them.”

“I just really like writing, to be honest. Creating something special. I notice that especially when I’ve been playing live for a while. My girlfriend notices it too, because I’ll be at the dinner table physically, but mentally still thinking about the songs I was writing earlier that day.”

‘The unrest is always there’

“I’ve gotten more certainty about my abilities and what I want. I know better and better where my strengths and my weaknesses lie. But like I said… I’m 37 years old now and I’m someone, and that might come from my jazz background, who always wants something new. In jazz, it’s a micro-level where you play a song differently every time, and this is more macro level: what will be my next step? What am I going to do now? I don’t want to ripple. There must be an upward trend, but I’ve come to think that there’s nothing wrong with it being a zigzag. At times it’ll have me feeling restless, because in a period with a lot of different things I want to focus, and when I’m focused, I want more variety. That unrest is always there.”

“The period I played with Fink was very valuable in more ways than one. Those guys aren’t so influenced by analysis or theory. They play and create from a gut-feeling of what they think is cool. That really was an eye opener for me. During the first rehearsal, I asked what chords he was playing, it turned out he was simply playing what felt right to him. That was the moment I decided that my somewhat snobbish look at music had to disappear. Music had to become a feeling again. Forget about everything else.”