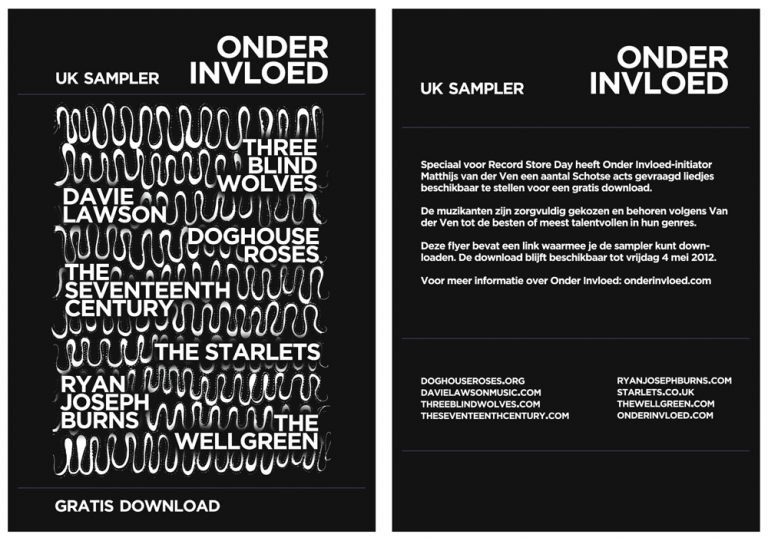 Tomorrow it’s Record Store Day. For those of you who don’t know what that means and can’t make their minds up based on the name of the day; it’s a day to celebrate the independent record stores all over the world. A lot of musicians release special editions of records or singles on vinyl and play instore shows. We at Onder Invloed decided to give all Dutch buyers a little treat; the first and possibly only ever Onder Invloed Sampler.

Everyone who buys anything at a Dutch independent record store tomorrow, will get a bag with a Onder Invloed card in it. On the card is a download link, which will take you to a Zip-file with songs by Davie Lawson, Doghouse Roses, Three Blind Wolves, The Seventeenth Century, The Starlets, Ryan Joseph Burns and The Wellgreen. A selection of Glasgow-based acts (except for Davie Lawson, who’s Dublin-based), made by me. The two Ryan Joseph Burns tracks come from his show at the Onder Invloed stage at the Grasnapolsky festival (featuring two members of the talented Dutch band Novack) and from his session at the Mailmen Studio in Utrecht. The recordings of the other acts come from their respective albums, ep’s and singles.