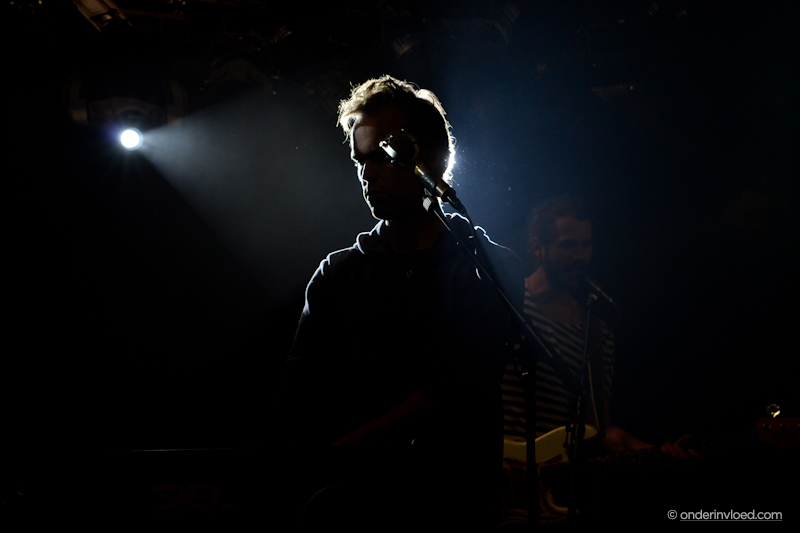 It’s hard to keep up with the productivity of Peter Broderick, who’s released over fifteen records, EP’s and cassettes in about seven years, one of them being a website that’s an album, or an album that’s a website. The composer from Oregon, USA did however slow down for a second to film this stunning session.

When we filmed this Broderick was on his European tour playing his solo work, the first time with a band behind him. Something he certainly seemed to enjoy. Playing with bands like Efterklang, Laura Gibson, and Horse Feathers, and being a session musician for M. Ward, Zooey Deschanel and many others, inspired him, but also made it clear to him he needed to be a solo artist as well.

The reason?‘Ego, haha! I probably just wanted all the credit to myself. No, there were things I wanted to try with music, which just weren’t happening in the different groups I played with. There’s a certain freedom you have when you make music by yourself.’ Performing in and with other bands did teach Broderick a lot though. ‘I learned a lot about getting on stage and performing in front of people, making a connection with audiences. And I also learned different things about music by working with different musicians.’

‘The first music I really loved was alternative rock stuff like Nirvana. My parents listened to a lot of folk music, so I heard a lot of that too. As a teenager I started to love modern composers such as Arvo Pärt and Philip Glass.’ Broderick’s sister Heather Woods Broderick is also a musician (solo musician, member of Efterklang, Horse Feathers, backing vocals for Sharon van Etten & Laura Gibson); it must be a hereditary talent. ‘Oh yeah, everyone in my family plays music. I have an older brother as well, and he was my biggest inspiration for learning the guitar.’

‘I’m inspired by simple everyday things, human interactions, nature, and of course other music as well. Discovering Arthur Russell was huge for me. I continue to be very inspired by everything he made. But my biggest inspiration is my friends and family who create music and art.’ Broderick has also been producing other musicians in his studio, for instance the new unreleased record of Shelley Short. ‘I love getting outside of my own musicality and learning new approaches to music. Sometimes different people have different tricks with recording techniques and software, so we can share our knowledge about that too. I certainly use all that experience when I work on my own music, but in a way I also try to forget it all and just do my own thing sometimes…’

So, let’s have a look at the three songs he chose to cover for Onder Invloed. ‘In October 2014 I played at a festival in Zwolle called ‘Let’s Get Lost‘. It immediately made me think of the song that shares that name, which Chet Baker sang. Baker has been a big inspiration for me, so I thought it would be nice to learn how to play this song for the festival. Later I found out the festival was indeed named after him, so it felt perfect.’ A friend introduced Just Like Anything by Jackson C. Frank to Broderick. ‘That was my friend Cécile, who makes beautiful music under the name Colleen. I loved it right away, and always thought it would be a great song to learn. There are some lines in this song that make me wanna cry, and others that I think are hilarious.’

Last but not least, Stina Nordenstam’s song. ‘Get On With Your Life was introduced to me quite recently by my good friend Andrew Neerman who runs a record shop and label in Portland, Oregon called Beacon Sound. Mostly I learned this song because I wanted to make a recording of it and send it to him as a gift. But while learning the song I realized that it felt really good to sing it. I love singing those words, Get On With Your Life.’

Get On With Your Life (Stina Nordenstam)

Get On With Your Life (Stina Nordenstam)
YouTube | iTunes | Spotify