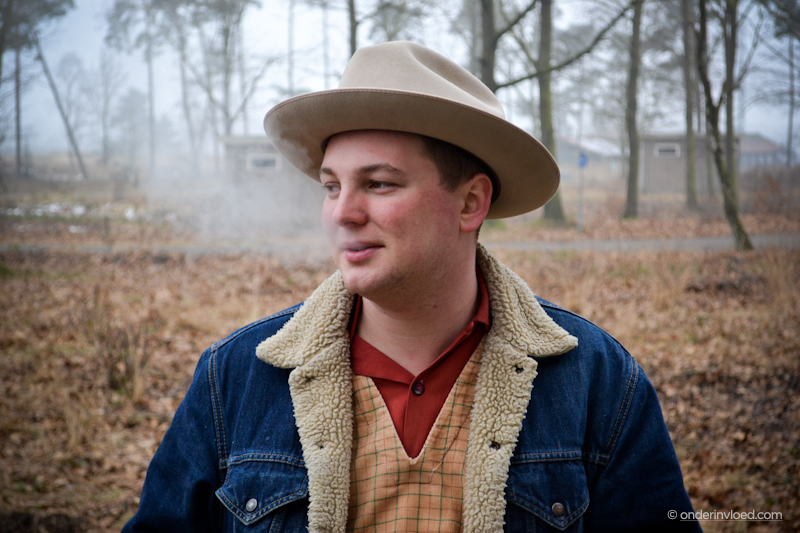 Back in 2010 Onder Invloed hosted a stage at the first ever edition of the Grasnapolsky festival in Bunnik. Since then, the festival has exploded into a way bigger version of itself at the amazing location Radio Kootwijk. This year, we filmed sessions in front of a small crowd inside an old, cold water tower, with a 16 meters high ceiling. The first act to experience the reverb the room provided that weekend was the young Newcastle-based Rob Heron & The Tea Pad Orchestra.

Being a big fan of the HBO show Boardwalk Empire and the music that was featured on it, 1920’s American music, I was glad to see Rob Heron & The Tea Pad Orchestra being added to Grasnapolsky’s line up. It became even better when they immediately agreed to record a session. They covered The Ink Spots and George Jones, both very carefully picked, explains Heron: ‘When I first started discovering the sort of music that I am inspired by and listen to today (early jazz, western swing, early country, blues, cajun, ragtime, etc.) one of the first bands I came across was The Ink Spots. I can’t remember how or when I heard That Cat is High, but I remember finding it a really fun song, so I learnt it and it was the first song that The Tea Pad Orchestra covered. The Ink Spots were the key to a treasure chest of musical discovery for me; and I never stop learning.’

One of his more recent discoveries is George Jones. ‘Ever since I heard his voice I have barely listened to anything else, and the song Things Have Gone To Pieces is my favourite. Jones’ vocal tone, and range in the song are just amazing, and the lyrics, although about heartbreak, are very funny.’

I asked Heron how his fascination for that old style of music developed and what artists turned him on to it. ‘After my friend played me some Cab Calloway, I went into my friend’s record shop and said: “Have you got any swing or ragtime or something?” and he pulled out a record called Tea Pad Songs Volume I. The idea for the band was decided upon later that evening! All of a sudden I had uncovered a world of early jazz and swing, which led to ragtime and blues, which led to 1950’s R&B, which led to rockabilly and western swing, which led to 1960’s country. There’s just so much music.’

Times spent digging into his parents record collection are some of Heron’s favourite childhood memories. ‘I grew up listening to a lot of folk and blues, Van Morrison, The Waterboys, The Pogues, Cajun music, Led Zeppelin, Rolling Stones, Bob Marley and loads of reggae. My parent’s music taste really is great!’ No wonder he soon started playing an instrument himself. ‘I remember deciding to learn the guitar when my dad taught me a D chord on his old guitar. I guess it spiralled from there. I played in rock bands when I was a kid and I used to write a lot of songs then for other people to sing. I never sang then. The songs never meant anything, they were just lines thrown together.’

When Heron was about seventeen, he took the next step. ‘I started gigging by myself and writing and recording songs that actually meant something, about girls probably. Somewhere down the line, I realised introspection wasn’t necessarily what people wanted to hear!’

‘The music scene in Newcastle is good. When it comes to the kind of stuff we do, there isn’t much of it, but there are a few great bands.’ Here’s a list of Newcastle bands we should all check out, according to Rob Heron: Hannah Rickard & The Relatives (‘50’s style R&B’), The Hokum Hotshots (‘legendary blues duo’), Struggle Buggy (‘blues’), The Sureshots (‘legendary Rockabilly’), Shipcote & Friends (‘great songwriter’), The King Bees (‘Chess style R&B’), The Baghdaddies (‘legendary klezmer, balkan, gypsy ska-jazz’), Holy Moly & The Crackers (‘folky, raucous and beautiful circus rock ‘n’ roll’) and The House Of Black Gardenia (‘traditional New Orleans jazz’).

That Cat Is High (The Ink Spots)

That Cat Is High (The Ink Spots)
YouTube | iTunes | Spotify