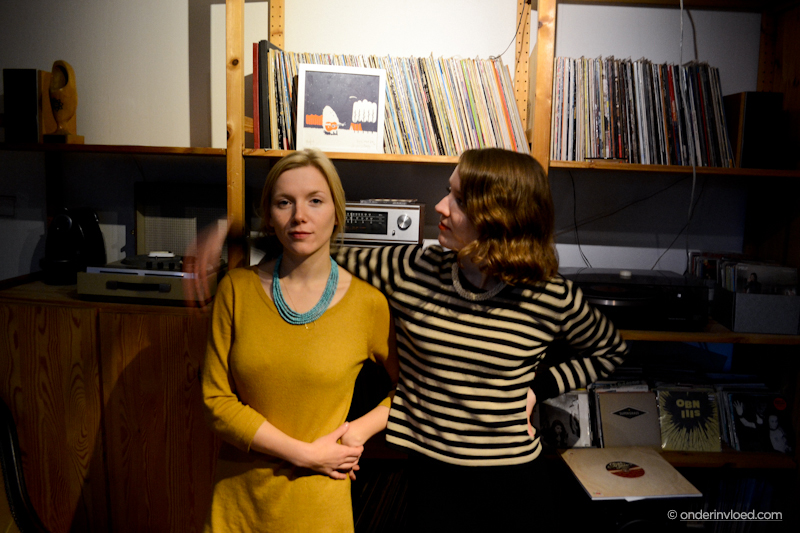 My bubba is another one of those acts that I’ve seen and read about for a couple of years, and when I heard their latest records Goes Abroader, it was an instant hit. They’ve been touring a lot in 2014, with the Dutch twin brothers of Tangarine, but also with the one and only Damien Rice. In between all the madness, they came in and recorded this session in Amsterdam.

At the head office of Excelsior Recordings and Beggars Groups, the Swedish-Icelandic duo covered three songs, each for different reasons: ‘The Bob Dylan song is one of our standards; it was the first song we sang together and it stays with us. It doesn’t get old. Or it was always old? Anyways, it’s family – Bob is My’s father’s wife’s ex-husband’s mother’s previous lover.’ They have previously released their cover of the Dylan song as Bob, We Love You..

‘The Peaches song is our joker that we pull sometimes during concerts when people are getting drowsy – it drags them even closer to sleep at first, then wakes them up suddenly as they hear the dirty words and get surprised faces, looking up on us. Halo, for the campfire.’

When asked what music they are most influenced by, the duo struggles. ‘It’s hard to define what kind of music inspires or influences us the most. Those things seem to happen in the dark, the depths, below the radar. It’s nice to keep it in the subconscious, and to not understand completely why the things that rub you the right way do and others don’t.’

As said in the intro of this article, My bubba has been busy in 2014, traveling and touring all over Europe and some in the USA. For instance: A week before this session was filmed, they had to cancel a show in The Netherlands, when Damien Rice asked them to be his support act in New York. Their summary of their year: ‘A lot of luxury hotels, private yoga instructor, towels. Big bathtubs. 89 Flights in two months. Birdland dinner with Bubba’s father. Hung out backstage with Letterman. Bad donuts. Many funny cab drivers; No 1 – Told us there are 144 languages spoken in his neighbourhood in Den Haag. No 14 – Told us his body is an instrument. Etc etc. 17 Train rides. Stranded in Brussels. Late night walk in Brussels. Champagne buffet in Berlin. Bad pizza in Brooklyn! Dancing long night in Amsterdam, managed to avoid the white heroin going around. Young man paid our bus fare when we didn’t have cash. Breakfast with Nigerian pen pal on Lower East Side. Singing in the car with the twins. Northern lights. The Apollo.’

Next week they’re playing the showcase festival Eurosonic in Groningen, The Netherlands, so who knows where this year will take them. ‘We are playing Eurosonic with the band – after touring as a duo in the fall – and recording in New York after that. Some touring in the US, some sweet potato eating. Some popcorn… We’ll see.’

Fuck The Pain Away (Peaches)

You’re Gonna Make Me Lonesome When You Go (Bob Dylan)
My bubba has previously released this cover as Bob, We Love You.