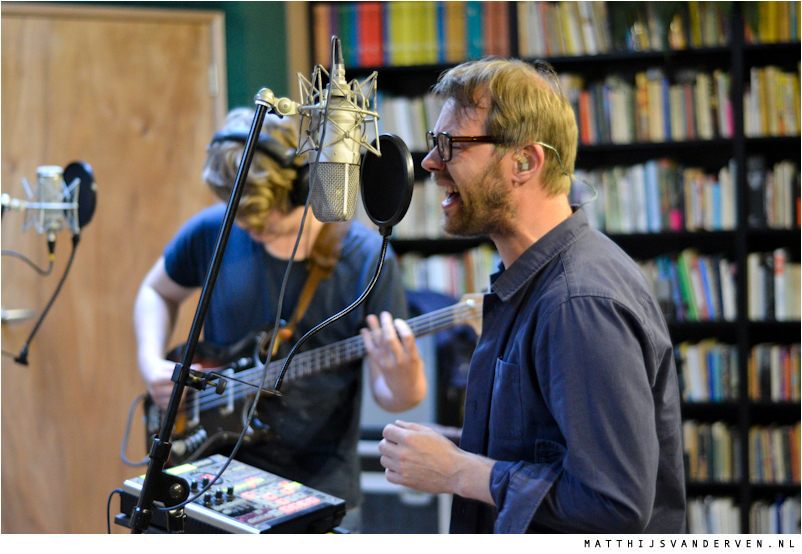 Early in 2009, Moss’ lead singer and songwriter Marien Dorleijn recorded this solo session, and ever since then I’ve hoped for a full band session. God knows why it took us this long. I wrote about Dorleijn and Moss in the Onder Invloed book and have seen them live numerous times, once even in Glasgow. In June, we finally made it to the Mailmen Studios in Utrecht where they exceeded all my expectations, which were sky high to begin with.

I was going to quote a piece that I wrote about Moss’ second album Never Be Scared / Don’t Be A Hero back in 2009, which ended up being the official biography for that record. But I’m not. Because even though everything I wrote then is still as true today, there’s a world of difference too. Moss – although having said goodbye first to Bob Gibson and later Jasper Verhulst, and welcomed Michiel Stam and more recently Koen van de Wardt – essentially still is the same band it was in 2009. They have released two more albums: The more keys-based Ornaments (2012) and this year’s We Both Know The Rest Is Noise, of which they played two songs for this session, in addition to the three covers.

One of the covers is a Alamo Race Track song, another Dutch band that’s on the same label (Excelsior Recordings) and who’ve recorded multiple sessions for Onder Invloed in the past. It’s already the second time a song by the Alamo’s was covered in an Onder Invloed session.

There aren’t many better things in life, than experiencing and getting to know the oeuvre of a band you like while they’re building it. You can kind of grow up with their music, which becomes part of the soundtrack of your life. I remember writing a review of Moss’ debut album The Long Way Back (2007) which is beautiful in its own way and has one of my favourite songs ever on it, but ever since finding a certain tone, sound or voice – however you want to name it – while making their second, they’ve build and expanded on that. Lesser musicians would have sticked to what they knew, after hitting a bit of well-deserved success like these guys did with single I Apologise (Dear Simon) from Never Be Scared / Don’t Be A Hero. The album was named the best Dutch record of the year by a lot of the critics. But Moss – whose members are now all contributing to the songwriting – have kept on growing, experiencing and creating.

It’s always a pleasure to record a session with producer Martijn Groeneveld in his Mailmen Studios, and this time was no different. I believe it was a Wednesday evening and by the time we were finished it was about midnight. This session gave me a rush and a feeling of pride that hasn’t left my mind ever since, and I hope you will enjoy these videos as much as I do.