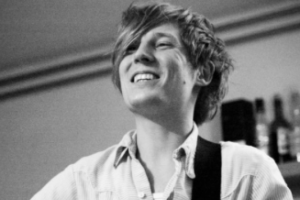 His new album ‘A Family Like Yours’ will be released next Monday, but while you wait for the new songs, watch Lucky Fonz III play old songs. Songs by artists who’ve influenced him heavily, like Bob Dylan, The Beatles, but also his friend Robin Block. He recites a poem by Block, and Block himself sings along on some of the songs, together with neighbour Cor.

The session, filmed in January 2009, was one of the funniest evenings so far on Onder Invloed. After eating only one sandwich on the train station in Utrecht, after working all day, the evening in Amsterdam was one of jokes; singing’ tea, coffee, no, tea, no, coffee, oh and tea; spontaneous collaborations with fellow singersongwriter Robin Block and neighbour Cor – who brought some beer with him.