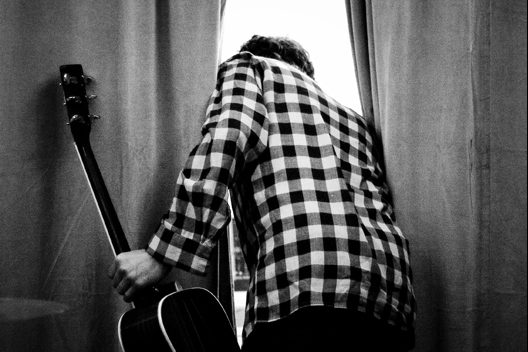 Today is a great day. It’s the day that ‘In Another Life’ is released, the new Anne Soldaat album, which he recorded with Jason Falkner in the United States in early 2008. Someone else described it earlier this week as ‘two legends working together’. It’s been on the top of my playlist for over a year, and from today on, it should be on yours as well.

I’ve been following (read: stalking) Anne Soldaat with a camera for almost two years now. It started out as interviews for an article to finish the School of Journalism. [Update: It ended up as a chapter in my first book ‘Onder Invloed’ in 2012] Aside to topics like Daryll-Ann, Do The Undo and his ambitions, the article will show Soldaat like he is; shy, modest, but very much determined and aware of what he wants to achieve.

I must say the past two years have confirmed and expanded my appreciation and respect for Soldaat as a musician and songwriter. Having seen him play live more times than I can remember, and having spoken to him, his fellow-musicians, his friends and his family; I think I’m able to say ‘In Another Life’ is his record. The record that’s been waiting to come out, like Norbert Pek wrote in the Revu magazine last week. This album will – or should – be on top of everyone’s yearlists at the end of 2009, without any doubts.

I will not lose myself in details on songs on ‘In Another Life’, even though there’s a lot to be said, because you’re reading this as an introduction to his Onder Invloed session. Soldaat played three covers together with Matthijs van Duijvenbode – who secretly is a great songwriter himself – in his rehearsal room in Amsterdam. Without playing his probably biggest influence, Neil Young, he gave a good perspective on his musical background.

Anne Soldaat was one of the first names I had in mind, right at the beginning of this Onder Invloed project, so you should be able to guess how delighted I am to present to you this session, with covers of Randy Newman, Beach Boys and Fairport Convention.

I hope you’ll enjoy this session as much as I do,
Matthijs