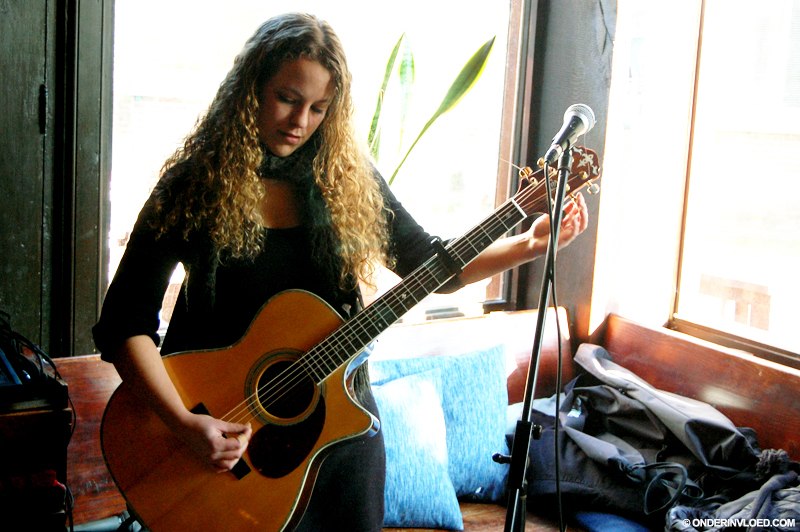 A couple of months ago, I recorded a session with Dutch singer songwriter Lea Kliphuis at ‘In De Blaauwe Hand’, the oldest bar of Nijmegen. Not long later, she phoned with the news her album was delayed and Excelsior Recordings was about to sign her. Her album will be re-recorded this summer. First an OnderInvloed.com session of course.

I was introduced to Lea Kliphuis by – our mutual friend – DJ St. Paul, who booked her on his famous ‘Kippenvel’ nights in EKKO and I saw her play Johnny Cash songs at the old Plato in Utrecht, two and a half years ago. I was impressed, as you can read in Dutch on 3VOOR12/Utrecht. So it wasn’t a big surprise to be recording a session with this lady. And yes, she played a Johnny Cash song.

She’s got a voice you won’t soon forget and which can blow you away at times. Wether she plays her own songs or Cash’s ‘Before My Time’, Dylan’s ‘Don’t Think Twice, It’s Alright’ or Springsteen’s ‘Highway Patrolman’. Later this summer, you’ll see footage from a house gig she and I organised at her place together with Davie Lawson, and of her show at Onder Invloed Live in Utrecht. For now, here’s her session and that should be enough to keep you satisfied for a long long time.

Before My Time (Johnny Cash)

Thanks
Cafe In de blaauwe hand.