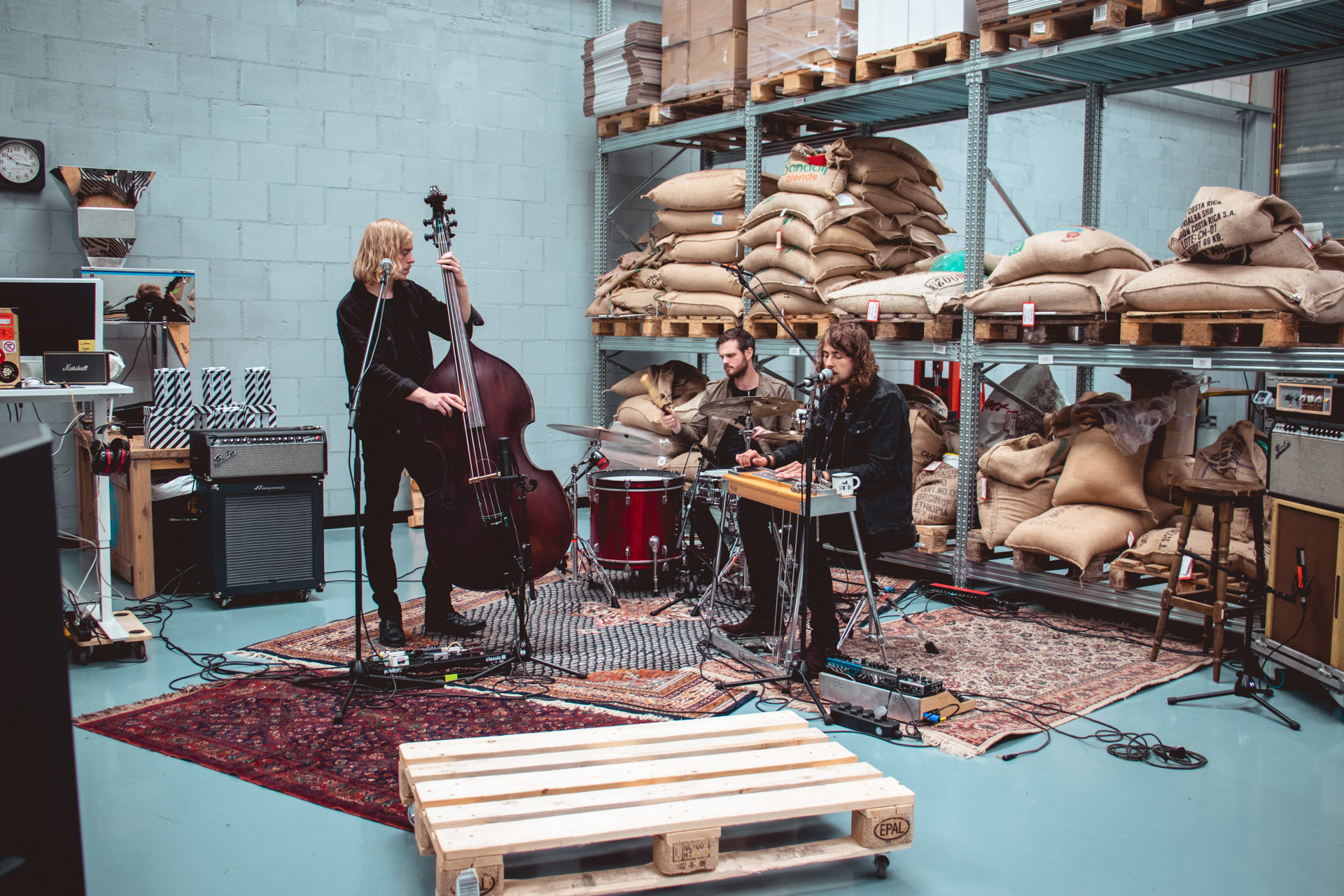 Jimmy Diamond is a completely new band. New music and other inspirations by drummer Ruud Gielen, bassist Floris Poessé and guitarist Jim Zwinselman as lead singer, who never really sang until a year ago. Gielen explains: “In 2019 we played at Into The Great Wide Open and Bruis festival with Strand of Oaks and while rehearsing Timothy wanted to hear Jim sing. So he just sang a random song, and it didn’t go well at all! But Tim said, ‘Yes Jim, you have to sing! You’ve got to do it.’ So we just tried that. In the middle of all the chaos that came with the end of RUV and still thinking about what we were going to do.”

In this session – filmed in a coffee roastery in Amsterdam – Jimmy Diamond played covers of Neil Young and My Morning Jacket and their debut single ‘Airplane’.

“Until a year ago, I’d never written a song.”

Songwriting is a group effort for Jimmy Diamond. Usually, Zwinselman writes the lyrics and the song’s skeleton, which they then work on together. “I used to sing backing vocals, but never had any ambitions of being a lead singer. I’d also never written a song before, that started this last year. It took a while. A lot has happened this year, we’ve written and played together a lot – trying to create a completely new sound.” The songs he started writing turned out to be something completely different from the blues rock guitar riffs RUV was known for. “It’s more song-oriented. Timothy has beaten that into us, basically. He infused us with all of these bands and records we’d never heard before.  The intention of the song had to stand.”

Poessé adds: “It’s a completely different way of making music, so it felt like we had to learn how. Really. The first song was really a sort of transition from riff-based music to what we’re doing now. Gradually it got better and better.” Gielen: “If you really only try to play the song, you are much more vulnerable. We’ve been at it for a year now, so how sure can you really be about what you’re doing?”

Talking to Zwinselman, Giesen and Poessé is quite refreshing. More than often bands – and especially younger bands – tend to project a very self-assured, almost arrogant image. Instead, the members of Jimmy Diamond are modest and open about their experience. “We recorded many different versions of our first single ‘Airplane’. Time and time again we didn’t get it just right”, Zwinselman explains: “We still had to learn to translate the feeling of when you write it to the performance or the recordings. So, that was a valuable learning process.” Gielen: “The first hunch is usually the most pure for us. We have had to learn to play in service of the song and the melody, rather than being as loud as you possibly can. It’s a more integral approach. And that’s also something we talked to Tim about often.”

The weird ways of getting to play in Strand of Oaks

How did three young Dutch guys end up playing as Strand Of Oaks’ European live band? Well, some people may know of Dutch tour manager Etjen van der Vliet – who works and has worked with a lot of your favourite bands: Tallest Man On Earth, Courtney Marie Andrews, The War On Drugs and many others. “At some point in 2018, Strand Of Oaks had European dates scheduled, but didn’t have a band. So Etjen told Timothy Showalter – as a joke: ‘Well, I know a couple of Dutch guys…’ But, Timothy wanted to hear us, so we recorded some videos to send him. A couple of weeks later he texted us: ‘Let’s play some music this summer’.”

The first show they played with Strand Of Oaks was in Belgium, in front of twelve thousand people. “We had never played shows like this one before. And we’d only met Timothy four days prior. As a result, that was the most euphoric show ever. To play completely different music, and to then see what it unleashes on the audience and the atmosphere it creates was truly very special.”

Crying in the backstage

I saw Strand Of Oaks live a handful of times, including twice with these guys, in Utrecht and Maastricht. The atmosphere described by the band members was tangible everywhere in the audience, and especially in Utrecht. “Every few shows with Tim, we end up crying in the backstage afterwards, because suddenly you notice that music really does something to you. And you’re really moved by it. After the shows we are really emotionally drained, and that’s something we had not experienced before.”

Looking for a recognizable feeling

“I have noticed that I have a preference for lyrics that aren’t very specific, or have a narrative, but those that are more visual, open to the listener’s interpretation. A feeling you can recognize. Did I say that clearly enough?” Poessé jokes: “And you probably shouldn’t describe it any more clearly, otherwise there isn’t enough room for my own interpretation.”

In this session, Jimmy Diamond covered Neil Young and My Morning Jacket. In addition to Strand Of Oaks, these are important influences for the band, they say. Gielen: “I used to have a long Neil Young period, where I listened to him a lot. But I’ve listened to so much music, ranging from very loud to quieter music. So, it’s just whichever way the wind blows, I guess.” Zwinselman: “I always think My Morning Jacket is a good reference for us. And I realize that’s a band that’s super hard to define.”

Me personally, I don’t feel the need to define things as much as I used to. And even if I did, it’s impossible to do that based on one single. So let’s just see where Jimmy Diamond goes in the next years, and enjoy whatever they come up with. Based on seeing them live and recording this session, I’d say a lot of nice things are yet to come.