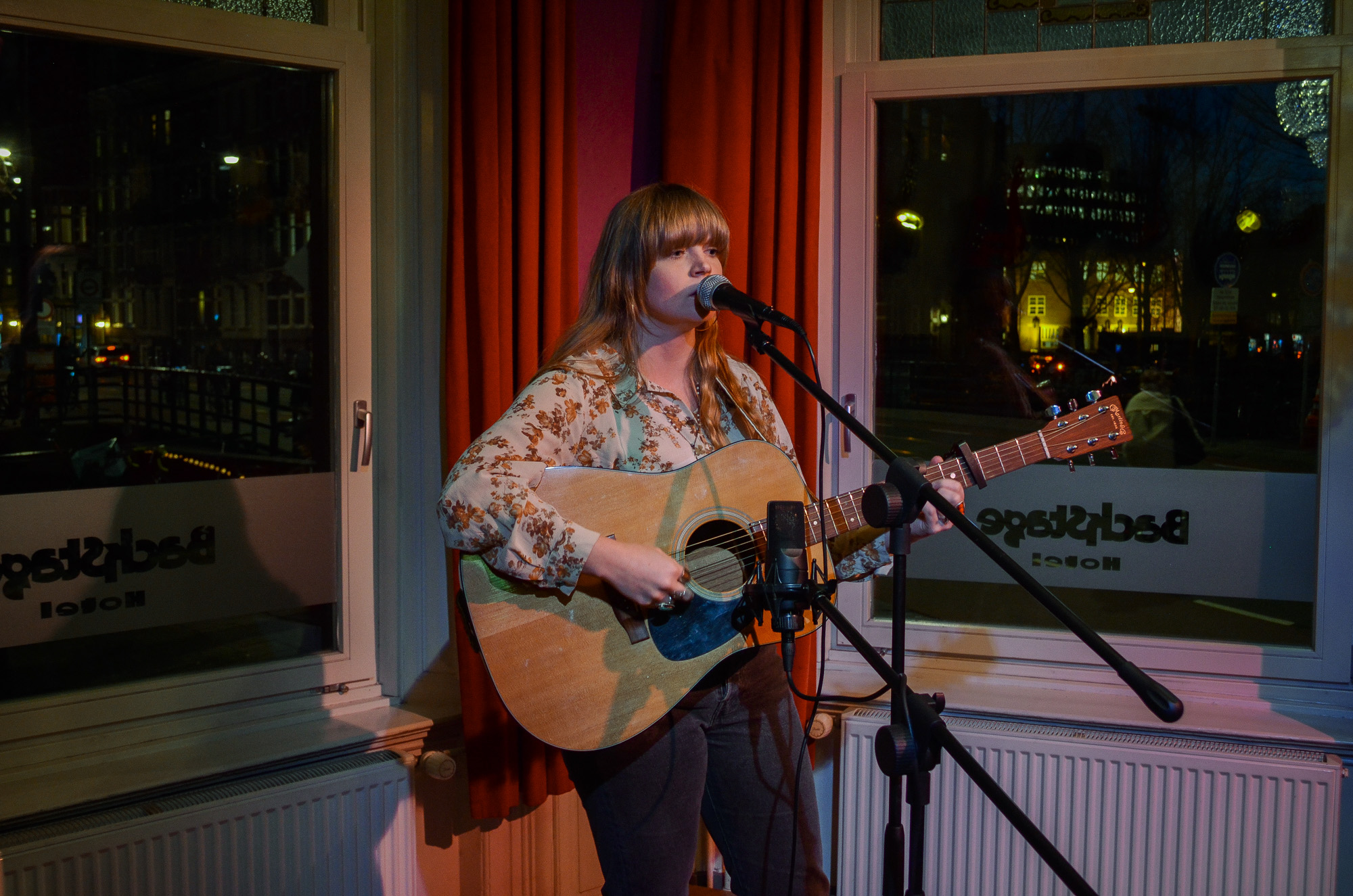 Four years ago I met Courtney Marie Andrews in a hotel near the airport, at the end of her long European tour supporting Damien Jurado. Ever since filming that session I’ve been amazed and fascinated by her talent as a songwriter and a singer. Not to mention the near-perfect record she released a while after with the instant classic Honest Life.

Now, with her equally daring and striking new record May Your Kindness Remain coming out later this week, it seems the perfect time for a brand new session.

The guy behind us at the Backstage Hotel seems to have had himself a grand old time in the Dutch capital. He’s sleeping face down on his table in the lounge, not a care in the world. Good for him. They say the rooms at the Backstage are even more comfortable than these tables, imagine how well this guy would sleep in there?

Courtney Marie Andrews and I are talking about how things picked up for her since Honest Life, a record that originally no-one seemed to believe in, until Mama Bird Recording Co. and Loose Music picked it up. It’s incredible how these things work sometimes. Reviews were extremely positive, venues kept getting bigger and bigger, she played on Jools Holland and even won some awards. All with a record virtually no-one but Andrews herself believed in at the start.

Her new album May Your Kindness Remain – released by the same labels and now also Fat Possum Records – is a bold step forward from Honest Life, which was almost completely written on the back of a difficult breakup. On May Your Kindness Remain, Andrews’ writing is less introvert without compromising her honesty. A lot of it seems to deal with mental illnesses and hardship. And the need for empathy and kindness. The title-track, which she recorded in this session, is an impressive essay on the subject.

It struck home with me, and I bet it will with a lot of people, seen as we could all use a lot more of both. In general, but specifically with people who’re suffering from a disease, disability or are just generally shit out of luck. I’m trying not to get too sentimental about this, but take it from someone who’s been having severe chronic pain for almost a decade and a half; it wouldn’t hurt people to try and consider what you’re dealing with, only if even for a second. So watch this session – including the title track, a Hank Williams cover and the new song Took You Up – buy May Your Kindness Remain when it’s released this Friday, and be kind.

I’m So Lonesome I Could Cry (Hank Williams)

May Your Kindness Remain

May Your Kindness Remain
Spotify | iTunes