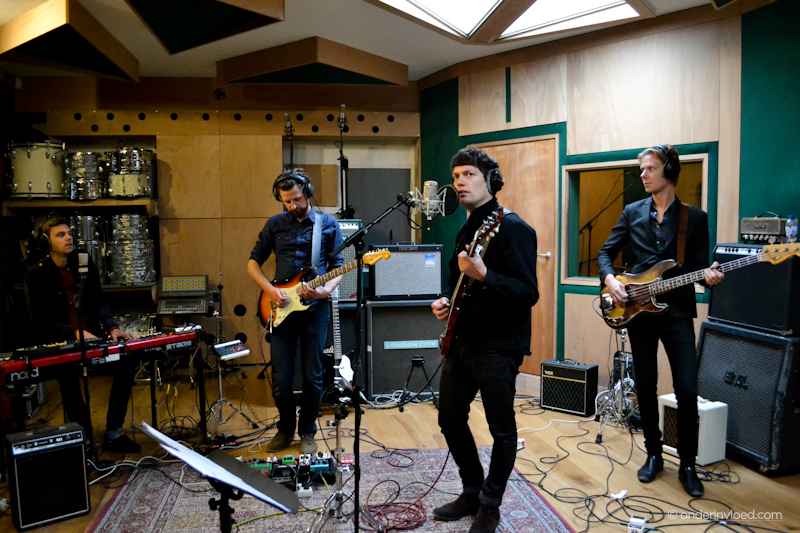 If you’re a regular visitor of Onder Invloed, you might remember the solo session Maurits Westerik recorded in a church all the way back in 2008. Since then, his band GEM was disbanded and a new one formed. Last Friday the first album by Bewilder was released: Dear Island, featuring Westerik as lead singer alongside some other well-respected Dutch musicians.

Read the interview with Bewilder below the videos. This session was recorded at the Mailmen studio in Utrecht. The audio was recorded and mixed by Mailmen’s Martijn Groeneveld.

Bewilder were given carte blanche by their label Excelsior Recordings. They told them to go to the isle of Vlieland, where they could use the local venue De Bolder as a studio, and to write and record an album. ‘That felt incredible, but at the same time it could become out of control, because if you sent a bunch of kids to a playground, they’ll never want to go home again.’

‘At times it felt a bit like The Rolling Stones having the time of their lives in the South of France.’ Westerik smiles and continues: ‘It turned out to be a very productive and creative process, because we started working towards the sound that Bewilder has now. The songs gradually grew together when we started working with our producer Henk Jonkers. Choosing him worked out really well.’

Jonkers is not only a celebrated drummer of amongst others renowned Dutch bands Fatal Flowers, Hallo Venray and Daryll-Ann, but also the producer of Hallo Venray, Claw Boys Claw and zZz. ‘The first batch of songs was very varied, eight of those ended up on the record, which is quite a lot. In the ten days of recording with Henk on Vlieland we recorded twelve songs; the drums and bass, even most of the guitars and some vocals.’

Bewilder’s five members come from different genres, but somehow found each other in this band. Westerik became well known as lead singer of the Utrecht-based rock band Gem, who – with one of their first shows – once stole the show supporting The Libertines in Amsterdam. He started some side projects (The Soldiers, The Giants Of Husavik) and played guitar in Anne Soldaat’s band for a while.

Guitarist Arjan Kamphuis was a member of rock band Bobby Kingsize and formed the duo The Soldiers with Westerik; keyboardist Arjen de Bock plays in Wooden Saints; bass player Jeroen Overman made a name for himself playing with Tim Knol and since then joined Douwe Bob and, for some time, Anne Soldaat. Drummer Bram Hakkens has been in high demand after playing in the successful Kyteman’s Hiphop Orchestra and has played with many good Dutch bands since.

By forming Bewilder, they chose to create something as a group, rather than just playing one person’s songs live. Hakkens is happy to be in a ‘real’ band again. ‘Kyteman also felt like a proper band’, the drummer explains on the phone the day after the release party last Friday, ‘but that was a huge project that at times went in ten different directions at once. I love being in a band for real again and going places with these four guys trying to create beautiful things.’

Variation works inspiring, Westerik thinks. ‘We all have a lot of experience, which causes us not to have that naivety of a young new band who can do one specific thing and who repeat that twelve times. When we had done a song one way, we were inclined to try some other ways to play it. Luckily Henk was there to push us in the right direction. He always made sure the mood was right, because all though we all get along very well, it’s nice to have one person there who says what has to happen at moments.’ Westerik still wrote all the songs, but Bewilder does feel more of a real band than Gem did in the end. The ever-smiling singer – who became a dad while working on this record – agrees. ‘We all worked together and everyone’s had plenty input.’ Hakkens adds: ‘We all take a lot of freedom live as well as on the record and we allow each other the space to experiment and search.’

The end of Gem, beginning of Bewilder

During the final years of Gem, it was rather clear that – although the final album Hunters Go Hungry (2011) still was very good – it wouldn’t hurt Westerik to get a fresh start. He admits he needed one. ‘I really did. Jeroen (Kikkert) did play on the record, being the last original member, but he quit before it was released because he didn’t want to play live anymore.’ Bram Hakkens and Arjen de Bock joined the live band and that’s where the first connection was made that they now still feel in Bewilder. ‘All of the sudden it was a completely different band and they kind of opened my eyes for all the possibilities. When you play the same songs with other people, they get a new life.’ Hakkens remembers agreeing to take that feeling to start rehearsing and working towards a new record. ‘We took the new stuff Maurits had written and after trying out a lot of things, it became something really nice. Right there and then we decided this wasn’t Gem but a new band. During the Gem tour those songs already developed and sometimes ended up in organized chaos, which is something we still do now. That’s where Bewilder originated.’

Westerik wanted nothing more than being in a band again. ‘In Gem I had to do everything myself during those last years and Hunters Go Hungry is almost a solo record in disguise. That’s why it sounded different than the earlier records, but I’d had that album in my mind for a long time and I just had to record it: the soul influences and those The Byrds, David Bowie and Velvet Underground type of things. It had to be released as Gem, so if the others didn’t want to be part of it anymore, I’d just do it by myself. It reached a new audience, but some fans from the beginning thought it was too different. I never really cared either way. Most of the musicians I admire, like Beck, Bowie, Bob Dylan and Lou Reed, do whatever they want and what they feel is right at that moment. But after that Gem was done, really.’

Dear Island is named as a tribute almost to the isle of Vlieland, one of the beautiful Wadden islands, in the North of The Netherlands, where they wrote, rehearsed and recorded most of the record. The isle has made its mark on the album and the band, claims Hakkens. ‘The peace of Vlieland and the lack of distractions were amazing. We had two full weeks for each other, the music and the band. We almost non-stop played music. Of course we had some fun as well, but a big part of the fun was making music. We were discovering.’ When they weren’t playing, they watched movies, Westerik adds. ‘We rarely listened to other music, because we worked long hours. That was also great about Henk: It didn’t matter if we had an idea at 8:30 in the morning or 2:30 at night, we’d just record it right there and then. You can hear that looseness and fun on Dear Island. We did whatever felt right.’

Producer Henk Jonkers had a lot of influence on the musical choices the band made, the singer realises. ‘For sure, especially when it comes to leaving things out. He’s a hardy spirit and doesn’t stop before it’s the best it can be. We couldn’t have chosen a better person for the job. He also helped with some arrangements and the groove of Minor Blues (Hold On), for instance, which is where Bram and Henk really connected. That’s a sort of summit: two of The Netherlands’ best drummer in the same room.’ There wasn’t a clashing of egos though, says Hakkens. ‘Henk gave us a lot of space. While we were muddling along, he would sit in the corner listening. At a certain point he would walk up and tell us what he did and didn’t like and give each of us some pointers. Whenever we’d get stuck, he usually came up with the right solution or loosened us up so we could continue ourselves. I loved working with him.’

It was a long process for the band, more than two years have elapsed since they started writing, Westerik explains. ‘I’m used to spending one or two years working on a record, while with other bands they sometimes only have to rehearse a couple of times and then record it. I was dead certain this result was in there somewhere, and Henk was also convinced of it. Slow and steady wins the race. It’s not finished until it’s finished. I can be very driven and ambitious when it comes down to it.’

Westerik was anxiously awaiting the release of Dear Island on August 28. ‘I’m curious to find out what people think of it, for the first time in years. It’s pretty different and if you hear it, it’ll be clear why it didn’t become a Gem-album. We had Angus & Julia Stone, Beck, Deerhunter and Villagers records as references when we’re mixing the record, that’s why we chose two of the covers in this session. Of course I’m still the lead singer and songwriter, but it really is something new. It felt right to change course. If it feels good, you should just do it.’

A final sentence to put in a frame, but everything seems to point out that Westerik has made the right choice and feels great about it. It was clear during the recordings of this session in the Mailmen studio, but also at the album release party on an outdoor stage in an industrial area in Utrecht last Friday night. Before the show the tension was visible on the faces of every band member, but as soon as the first song is halfway through, the staring eyes make way for relief and joy. Including the characteristic smile on Westerik’s face. Like the singer himself says: ‘This isn’t just any band.’