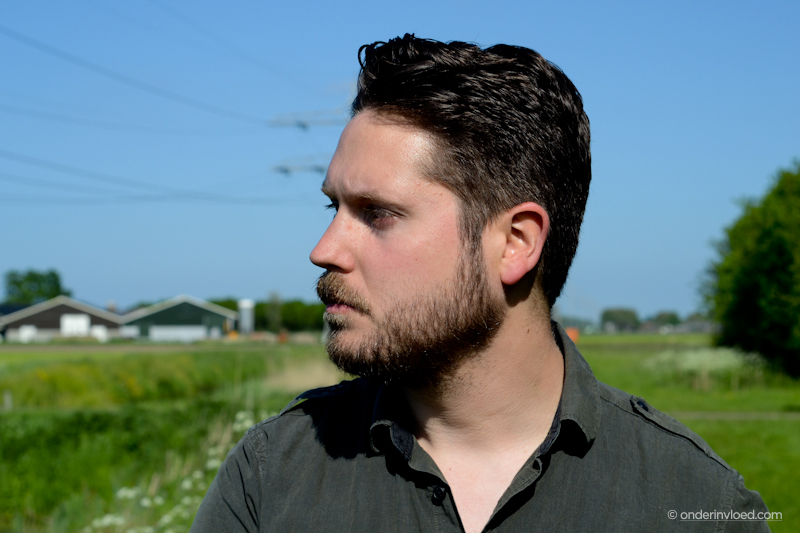 I remember seeing Tenement Kids perform live on Dutch television some years ago and playing their self-titled record the morning after. I remember liking it and listening to it a lot since then. I don’t remember why I didn’t film a session with them, but earlier this year their songwriter and lead singer Gijs Wilbrink released his solo EP GODAWFUL CALMNESS as GFJF and we drove to a meadow just outside of Utrecht to film this.

Read the interview with Gijs Wilbrink below the videos.

 Hallways (At The Close Every Day)

I Gave You (Bonnie ‘Prince’ Billy)

Why did you go to Macedonia?

‘I’ve been to Macedonia regularly in the last ten years, because my wife Arja’s family is from there. Some of them still live there, so we often visit. It’s a beautiful calm country that radiates some sort of primal power that The Netherlands has lost a little for me. Whenever I’m there I seem to write a great amount of songs and stories, but a lot less over here. Last year we decided to go live with Arja’s grandmother for a longer time to write, play music and of course to help with chores in the house and garden. It was great. We stayed for almost a full year.’

How would you describe the country?

‘We lived near a big lake, surrounded by mountains. I was constantly aware of the nature and inclined to live according to the rising and the setting of the sun. It was a good setting for writing songs, because I wasn’t thinking or bothered by the daily pressure. The people are rather calm and friendly; the stereotypical Balkan men who slam their fists on the table only exist in the bar, late at night. Which is when I don’t mind them, haha. Those men tend to invite you to visit their homes to drink and play music when you first meet them, so I must have met a new musician every week.’

You went there determined to write a book, how come you ended up writing songs instead?

‘Ha! I wanted to write something else than songs, indeed. But I took my guitars with me, so I must have had a suspicion as to what would happen. Within a week of our arrival I met Zoran Krecho, a friendly Balkan man who’s got a recording studio. It immediately became certain I would record a few songs there, and that in the end became GODAWFULL CALMNESS. The circumstances were perfect. Just the simple fact that I was used to write songs for the bands I was in and I now was away from my band members for a year. It seemed obvious to write more stripped down songs. My book however is far from finished…’

Halo Haunted, one of the covers in your session, is also featured on the EP. Is it an important song for you, or Cooney a big influence?

‘Tom Cooney recorded that song in West Country Girl, a restaurant in Paris that was the centre of a fascinated music scene a couple of years ago. Josh T. Pearson lived above it, the local singer songwriter Thousand played there often and the Australian Cooney as well. On one night all these musicians came together to perform their own and each other’s songs. That night was recorded and released as the compilation West Country Night. The feel of that record has influenced me a lot and it often came to mind when I was playing with Macedonia’s local musicians late at night.

When I had almost finished the EP, I thought about that record again and I found out that the theme of Halo Haunted fitted with my songs very well. My lyrics are mostly fiction; stories I found interesting enough to explore. Like Halo Haunted they also feature characters that are struggling with good and evil; as if the good is haunting and frightening them even more than the evil.’

Which musicians are your biggest influences, growing up and now?

‘As a kid I grew up listening to my parents’ records, who luckily had a lot of great music: The Band, Led Zeppelin, Procol Harum, et cetera. Mid nineties I got into skateboarding, punk and hard-core. Through emo and screamo I discovered post-punk, then the alt. country. After that I suddenly liked all kinds of music basically, which is rather nice and easy.’

What is it you like about At The Close Of Every Day, or Hallways specifically?

‘That band, as well as bands like The Spirit That Guides Us, showed me – a sixteen years old punker – that there’s plenty music outside of the punk genre that can feel just as intense and exciting. It was a personal revolution, when I saw At The Close Of Every Day play live in Norway. It opened the door to everything else: Bonnie ‘Prince’ Billy, Nick Cave and even Tom Waits and Bob Dylan.’

Hallways (At The Close Of Every Day)
YouTube | iTunes | Spotify

Halo Haunted (Tom Cooney)
The original of this song is not available on YouTube, Spotify or iTunes.

Location
Somewhere just outside of Utrecht.