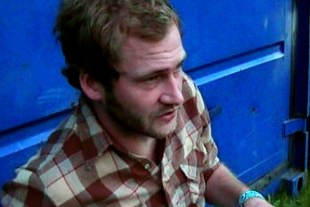 Alamo Race Track is one of the bands from The Netherlands that I just can’t get enough of. Every concert is an experience you don’t want to miss. So they were on every wish list I made for Onder Invloed in notepads, or at the back of magazines. In August they agreed to me filming a set at ‘De Parade’ in Amsterdam.

I don’t even know when I saw Alamo Race Track live for the first time. But I do remember getting their album Black Cat John Brown from Excelsior’s Ferry Roseboom. It then had to compete in my stereo with Do-The-Undo’s debut album, which I also got from Ferry at the same day. The music isn’t really comparable, but both albums are filled with great tunes.

With songs like The Northern Territory, Stanley vs Hannah, Lee J Cobb Is Screaming A Lot and many more, singer Ralph Mulder and his band already have proved they’re able to write songs that could just last forever. This summer, they showed they can also do more than justice to great songs by other musicians. Like, for example, Famous Blue Raincoat by Leonard Cohen and After Hours by Velvet Underground.

One thing I definitely didn’t expect, was a Hungarian song being played at an Onder Invloed session, but singer Ralph Mulder had a bet with his Hungarian friend, who’s a folk singer. Ralph told her he could sing a song in her language, and so he did. De Szeretnek is the weird, but wonderful result of the bet.

Alamo Race Track played not three, but five (!) songs of their influences, please enjoy. It’s beautiful. Many thanks go out to Asta Kat, who accompanied the band on these songs, for her help on setting up this session.