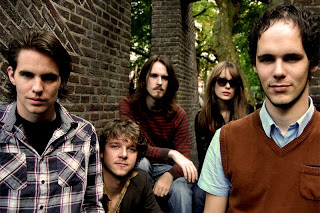 “There’s a mp3 of a new song in your mail. What do you think?” There was a period I got messages like this one about every week. They came from Nick Schuit, an old friend from Ridderkerk, now Rotterdam. Nick studied at the Rock Academy at that time and started his own band, called The Cosmic Carnival. He recorded his debut album and now, this session.

I remember Nick playing Dylan songs on his guitar when we were away on weekends, and heard the demos of The Cosmic Carnival grow by time. It was clear from the start wich influences Nick, Gerben and Ronald (also an old friend from Ridderkerk) were thinking of while recording these songs. I wouldn’t be surprised if it turns out Nick says a little ‘thank you, sixties’ before he goes off to sleep every night.

Their self titled debut album is out for sale now, but live shows have yet to be confirmed. Shows with original Cosmic Carnival tunes that is, because TCC have been playing as tribute band to artists as Grateful Dead and Arlo Guthrie. At showcases and at the Woodstock aan de Maas festival this weekend in Rotterdam. I went to see them play in front of a bunch of hippies – young and old – and become the public’s favorite.

We shot the session at Gerben’s place, with an additional band member in singer Marlies – also a familiar face from my hometown – on a exceptional warm Sunday afternoon. A lot of people in a small room in Rotterdam, with the windows closed because of the noise outside. The Cosmic Carnival played songs by Bob Dylan, The Band and Grateful Dead.

I Shall Be Released (Bob Dylan)