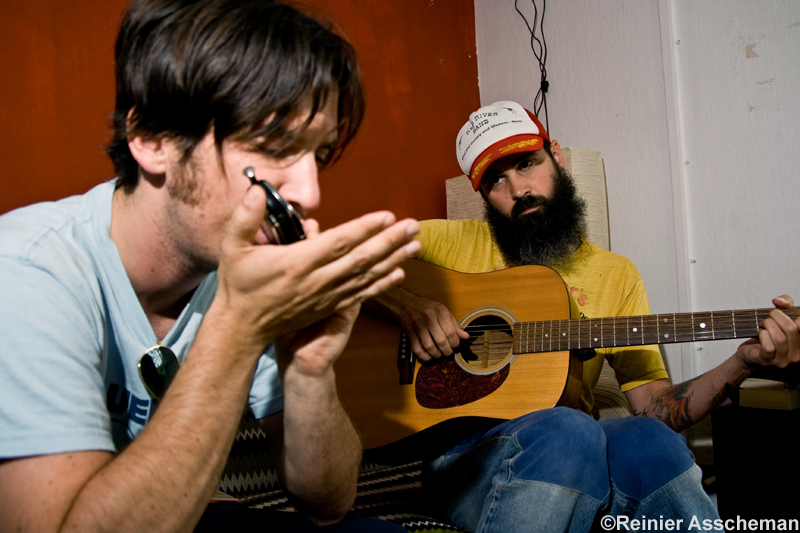 “You should ask Octoberman to do a session”, a friend told me, more than once over the past six months. Some extra visits to his MySpace later, I sent him a message and he agreed immediately. And he brought a nice bonus with him as well; his good friend and musician going under the name Oldseed. So Onder Invloed brings you a double session with two Canadian singer songwriters.

Octoberman is actually called Marc Morrissette, from Oakville, who doesn’t need more then four minutes to convince you of his songwriting skills. Songs like ‘Chasing Ambulances’ or ‘By The Wayside’ kick in at the first listen. One thing you surely don’t expect, knowing his delicate voice and melodies, is that Marc started out with listening to rap music and was even making his own beats and raps as a young boy.

But first there’s the session with Oldseed, Craig Bjerring, also shot in the basement of Lukas Batteau and recorded by probably the funniest booker in this country; Ravinia Thwaites. Craig is a guy with an unusual but interesting personality. He’s living on the go, going wherever the music brings him. Moved to Germany a couple of years ago to work with disabled children and writing songs whenever he gets struck by a lightning of inspiration.

Craig’s into the punk way of living. What that means exactly, only he can explain, and that he will in the video interview underneath. The songs he chose to cover are in a chronologic order. First, there’s ‘Don’t Stop Believing’ by Journey, followed by ‘Bottled Violence’ by Minor Threat, and finally ‘The Great Compromise’ by John Prine.

Marc played some harmonica on ‘Bottled Violence’ and Craig returned the favor by doing the backing vocals on ‘I’m On Fire’. Please, go have a look at all of these great covers and watch the interviews as well, there’s lots to be learned. Also there are more than beautiful photos taken by Reinier Asscheman.