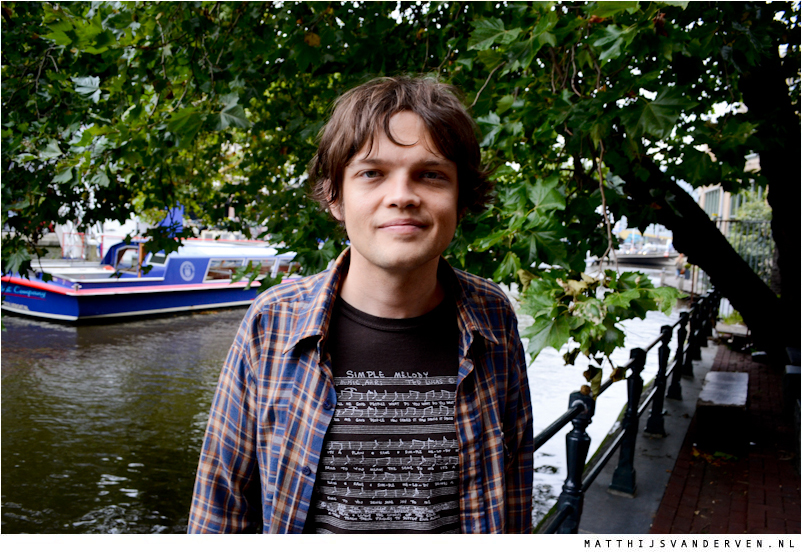 If you don’t know the Dutch booking agency Belmont Bookings, you should check their roster, because it’s an overload of great acts to go and discover. One of them is William Tyler, the guitarist from Nashville who’s – amongst others – played with Lambchop, The Silver Jews and Bonnie ‘Prince’ Billy. He recorded an instrumental session on a very windy day, outside behind Paradiso in Amsterdam.

Tylers most recent album Impossible Truth (2013) creates a new world in your mind. You’re sitting on your own couch wherever you live, but in your head you’re either driving or walking in a desert, lying in a field enjoying the sunshine or lying on a floor trying to figure out which way is up. It may very well be corny to say his music takes you on a trip, but it wouldn’t be a cliché if it wasn’t true.

We were about to start filming the session in his backstage dressing room at Paradiso after his show, when a band started sound checking their bass and drums on the main stage. That made it impossible to do it there, so we moved outside where the wind was pretty heavy, as you’ll hear in the video. It was still dry though, and there wasn’t an alternative location at hand, so we went ahead and did the session next to the canal, where over enthusiastic tourists sailed by in the infamous canal boats.

I personally believe the circumstances don’t have to be perfect for sessions like this, it is what it is. It’s real. And the performance by Tyler is really astonishing. I’m glad to publish what is only the second all instrumental session for Onder Invloed. The other one was recorded by Simon Angell (Thus:Owls, Patrick Watson), back in 2009.

The songs played in this session are:
1. A medley of: Mr. Sandman (Chet Atkins), On Some Faraway Beach (Brian Eno) & Hot Dogs
(Blind Lemon Jefferson)
2. The Battle Of The Somme (Traditional, arr. Fairport Convention)
3. Waltz Of The Circassian Beauties (William Tyler)